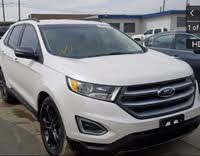 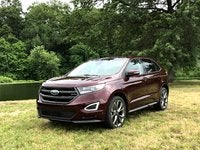 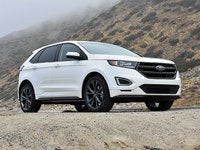 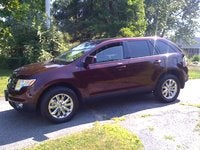 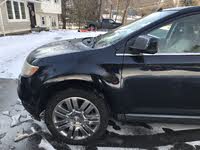 My 2010 Edge has AWD that never transfers power to rear wheels on snow and ice. I have taken in to the dealership and they tell me it is working normally, but I have tested it out on snow several tim...

When out to the car about 3 hours after leaving it and found the radio on. Unable to shut off, or adjust the radio in any way. Car starts and shuts off just fine. Started the car and the instruments w...

My power liftgate is stuck, it won´t open or close all the way. How can I fix this?

HI! My engine got replaced under warranty. It will be 2 years old in November. Two weeks after the engine was replaced the Engine Light came on and the same thing that happened before has happened a...

My friend's engine died while she was driving with her daughter, luckily she had slowed for a turn off and drifted into the turn. Engine would not restart. DEAD. Dealer says they won't help even tho... 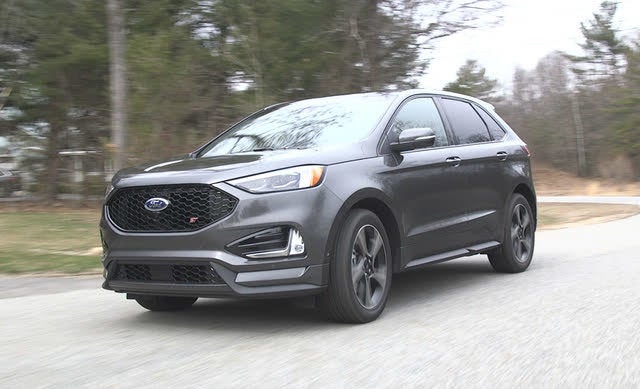 During the past decade, Ford has offered a range of crossover SUVs that vary by size: small (EcoSport), compact (Escape), midsize (Edge), and family-size with three rows of seats (Explorer and Flex).

When Ford introduced the 5-passenger Edge for the 2007 model year, the larger Explorer was still an unrefined traditional SUV and the Flex hadn’t gone on sale yet. The Edge’s role was to capitalize on the growing shift to crossovers and to serve consumers seeking more passenger and cargo room than the Escape could provide.

Today, the Edge is an established player in the 2-row midsize crossover segment. And with a choice of powertrains, optional all-wheel drive (AWD), and a generous list of active safety systems and infotainment technologies, it makes the shopping list for many people, particularly those seeking a vehicle from an American brand. In particular, driving enthusiasts will want to check out the high-performance, twin-turbocharged Edge ST.

While the Edge has steadily improved since the first ones rolled off the assembly line, it’s in need of a complete redesign sooner rather than later.

2015-Present: Current Generation
The second-generation Ford Edge was introduced in 2014 for the 2015 model year. It shares its platform with the Lincoln MKX, which itself received changes for 2019 that transformed it into the Lincoln Nautilus.

The Edge is currently available in SE, SEL, Titanium, and ST trim levels. Known as the Sport trim from 2015 to 2018, the ST has a powerful twin-turbo V6 and other engineering modifications that make it more fun to drive.

With its second-generation design, the Edge added actual edges to its styling, eliminating the smooth and rounded appearance of the first-generation model. Interior quality improved, too, and the second-generation Edge is roomy and comfortable for up to five people and between 39.2 and 73.4 cubic feet of cargo.

A turbocharged 4-cylinder, a V6, and a twin-turbo V6 were available from 2015 to 2018. Each came with a 6-speed automatic transmission powering the front wheels. AWD was an option. In a bid to improve the Edge’s overall fuel economy, Ford dropped the V6 engine for 2019 and added a new 8-speed automatic transmission. The racy ST replaced the Sport, adding standard AWD in the process.

Early problems with the steering and, in 2016, the driver’s side airbag, were cause for recalls. Otherwise, the second-generation Edge has proven trouble-free. It’s relatively safe too, earning a Top Safety Pick rating from the Insurance Institute for Highway Safety (IIHS) on two occasions. Ford added new active safety systems for 2019, improving the SUV’s safety.

CarGurus has evaluated the second-generation Edge three times. In 2019, CarGurus gave the Ford Edge a rating of 7.3, down from 7.5 in 2017 in spite of that model year’s updates. In a 2016 test of the Edge Sport, the performance-tuned version of the SUV received an 8.5 rating.

2007-2014: 1st Generation
In 2006, Ford introduced the Edge as a 2007 model. Built on the same platform as the automaker’s Fusion sedan, the rounded–some might say pudgy–Edge came with a 265-horsepower 3.5-liter V6 and got 18-19 mpg in combined driving. The Lincoln MKX was the same thing as the Edge, only fancier.

The Edge received a refresh for 2011 that gave the SUV a well-received cosmetic makeover. In addition, you could choose between a more powerful version of the 3.5-liter V6 and the new Edge Sport trim level powered by a 3.7-liter V6 making 305 horsepower. Complaints about its awkward MyFord Touch infotainment interface and tight cargo space were common; with its rear seats folded, the Edge offered just 69 cubic feet of cargo room.

For 2012, Ford added a new turbocharged 2.0-liter 4-cylinder to the Edge. Rated to make 240 horsepower, it averaged 20-22 mpg in combined driving, boosting the SUV’s fuel economy.

Problems with the first-generation Edge pertained to the fuel system and airbags, for which the SUV was recalled in significant numbers as part of the Takata airbag recall. After the 2011 refresh, the airbags were no longer an issue, but the SUV suffered additional problems related to locks, electrical systems, and the drivetrain. By 2013 and 2014, however, most of the Edge’s issues were resolved.

When the National Highway Traffic Safety Administration (NHTSA) revised its crash-test rating system for the 2011 model year, the Edge’s performance declined, getting no better than 3 stars for frontal-impact protection. At the same time, however, the 2011 Edge was a Top Safety Pick according to the IIHS.

With its practical dimensions that are not too small and not too big, the Edge appeals to families seeking something just the right size.

Primary competitors in the midsize SUV class include the Chevrolet Blazer, Honda Passport, Hyundai Santa Fe, Kia Sorento, Nissan Murano, and Subaru Outback. However, some of the larger members of the compact crossover SUV segment, like the Honda CR-V, Subaru Forester, and Toyota RAV4, have enough cargo space to compete with these other vehicles.