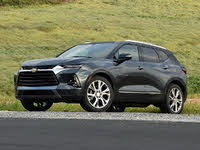 Recently bought a 2004 Chevy blazer, have missing hoses on the thermal system and I don’t know which ones to buy.

needing to know where the battery feed for fuel pump wire to fuse block should be going currently have a fuseable link in the ecm1 because im not sure where to connect power other then that fuse.

What do I do if a "buyer" makes an offer and I accept it, but then that "buyer" does not respond in a timely manner? I need to know because a second person is interested in my 4WD, but I can't go ah...

Can I Use An Older Starter?

One of the true classics, and a pioneer of the SUV concept, the Chevrolet Blazer was launched in 1969. completely revamped on a new platform in 1983, and continued until 2005.

From its beginnings as a sturdy, mid-size off-road vehicle in a market that didn't quite know how to classify it (was it a pickup truck? a wagon? a utility vehicle?), the Chevy Blazer attained an iconic status on the American road.

Drivers loved the Blazer for its stiff, high-set suspension, its rugged but responsive handling, its durability, and its affordable price. The Chevy Blazer was seen as ready to face tough terrain, as well as roomy enough to carry a gaggle of Little Leaguers with balls, bats, and giant ice cream cones home from the game.

Unfortunately, the Chevrolet Blazer was outpaced by the very trend it had been so key in starting. As SUVs got bigger and more luxurious, the Blazer lagged in sales. Replaced by the TrailBlazer spinoff, the original Blazer is still mourned by drivers who miss its old-school styling and amazing value.

Blazers are also well-loved by the tuner and hobbyist market. You'll find a number of these tricked out as high-end project vehicles; they've got the heft and the Detroit steel to make the investment well worth it!