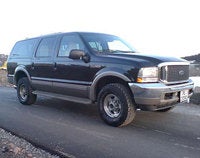 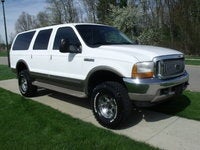 Pricing And Buy Determination By CarGurus

CarGurus offers a pricing tool. There is a king list of them, yet when on the buying list, it says not enough compatibles. Yes when we use the pricing tool, it’s only listing a couple hundred doll...

I found the Excursion for my family, but really need the 4 captain chair configuration. So, I am looking for someone with a 2004 Limited 4x4 with two 2nd row captain chairs (bucket seats) that are t...

Do I Have To Reprogram The Computer In My Truck?

Just change the motor in my 2000 ford excursion does the computer need to be reprogrammed.

Hello, I have a problem with my 5.4L 2003 Ford Excursion. It would run well, but while driving, it would just die on me. Wait 3 minutes, start it up again, then another 200 yards, it would die again...

The Ford Excursion was a great example of the 'bigger is better' mentality that dominated the US auto industry during the SUV era. Ford responded to strong sales from the GMC Yukon XL and the Chevy Suburban by beating them at their own game with the mega-sized Excursion.

The Excursion was based on the Super Duty truck platform, and classified as a heavy-duty commercial vehicle. Weighing in at three and a half tons, the Excursion was, when it was launched, one of the largest vehicles ever marketed widely for passenger use.

Not surprisingly, the Excursion's gas mileage was pretty dismal. Still, the Excursion did find a following among people who needed (or just wanted) to drive a sport-utility vehicle the size of a small European nation.

The Excursion was axed in 2005, a victim of rising gas prices. It's still a favorite with tuners and project enthusiasts, though; there's a lot of Detroit steel to work with, and it's fun if you're not planning to drive very far.