About the Jeep Wrangler

The Jeep Wrangler traces its roots to the World War II era, when its predecessor served as the go-to workhorse for the U.S. Army. Designed for ruggedness and flexibility, the original Jeep was the ultimate off-roader. That defining trait carried forth over the next few decades, through the Willys Civilian Jeep (CJ) series of the 1950s and '60s, and the American Motors versions of the 1970s and '80s. Four-wheel drive remained a constant feature throughout the Jeep's history, and although various versions have appeared over the years, the current Jeep Wrangler retains the same basic DNA as its original WWII-era counterpart.

The Wrangler made its debut in 1987 as a replacement for the decades-old CJ. Although developed by American Motors, the first Wranglers were sold by Chrysler, which purchased American Motors in 1987. Perhaps to make the most of the Jeep's iconic status, the automaker put the rugged off-roader at the center of its own division under the Chrysler umbrella, where it remains today. For the record, Chrysler officially refers to the Wrangler as a mini sport utility vehicle.

For 2010, Jeep updated the Wrangler's soft-top roof to make it easier to remove and replace, while for 2011 the Wrangler received a minor interior refresh, with a new dashboard and gauges, as well as larger side pockets in the front doors and a new steering wheel borrowed from the 2011 Grand Cherokee. Outside, power heated mirrors are now optional.

Power for all Wrangler trims comes from a 3.8-liter V6 engine, which generates 202 hp in the two-door trims and 205-hp in Unlimited trims. The V6 manages fuel economy numbers of only 15/19 mpg, which place the Wrangler last in its automotive segment for fuel efficiency. To ensure its rugged nature stays intact, the Wrangler still comes without power windows, power mirrors, or air conditioning in its base package. In addition, the front doors remain removable.

Historically, the Wrangler has changed only incrementally from generation to generation, and generational refreshes occur only every decade or so, which means the Wrangler will likely remain in its current form for some time to come. Updates in 2007 and 2011 addressed some of the Wrangler's interior comfort and safety issues. However, fuel economy remains an area for future improvement.

While the Willys CJ kept its foot firmly in the military-oriented off-road segment, and was offered in bare-bones configurations, the Jeep Wrangler was designed to be more on-road friendly, with the goal of attracting daily drivers. Upon its debut, the Wrangler featured a slightly wider stance, lower clearance, and a more comfortable interior than the CJ. It drew most of its exterior styling cues from the CJ as well, although it displayed a larger windshield, a new grille, and rectangular headlights, which proved somewhat controversial with aficionados.

Internally known as the YJ, which designated the platform upon which it sat, the Wrangler was initially available as a two-door convertible and a two-door truck. Power came from a couple of engines, including a 117-hp, 2.0-liter four-cylinder engine and an optional 112-hp, 4.2-liter six-cylinder with better torque numbers than the smaller engine (135 lb-ft for the four-cylinder vs. 210 for the six-cylinder).

The original Wrangler had a wheelbase of 93.4 inches and an overall length of 152 inches. The suspension was primarily borrowed from the CJ, although the Wrangler's suspension sported wider springs, as well as new trackbars and swaybars, which helped improve stability and handling. Owners could choose from four transmission options as well as two gas tanks, including the standard 15-gallon tank and an optional 20-gallon tank, for those who required more fuel capacity.

The Wrangler was originally built in a plant in Brampton, Ontario, Canada, but when Chrysler closed down the plant in 1992, the automaker moved assembly of the Wrangler to Toledo, Ohio. In Canada, however, the vehicle was not badged as the Wrangler. Instead, it was rolled into Chevy's truck lineup.

From 1988 to 1992, Jeep offered the Wrangler with an optional Islander package, which included high-back seats, a center console with cupholders, carpeting, additional body trim, and alloy wheels. A Renegade package, offered from 1991 to '94, added a number of upscale features, such as a leather-wrapped steering wheel, power steering, and upgraded fabric, as well as unique wheels and tires.

In 1991, Jeep offered a new optional 181-hp, 4.0-liter V6, which replaced the previous V6 powerplant. The following year, the automaker added antilock brakes as an option and extended the roll cage to make room for shoulder belts. In 1994, an automatic transmission joined the options list.

Following a year-long break from production in 1996, the second-generation Jeep Wrangler debuted for the 1997 model year, and many reviewers welcomed the changes. Internally code-named the TJ, the second-generation Wrangler sat on the same 93.4-inch wheelbase, although the automaker upgraded the suspension, borrowing design elements from the Grand Cherokee to create a more comfortable ride. Round headlights replaced the rectangular ones, and Jeep revised the Wrangler's soft top, so it folded more like a traditional convertible top. Owners could also opt for an available hard top.

In 1999, a standard 19-gallon gas tank replaced the 15- and 20-gallon ones. Into the early years of the 21st century, Jeep made a number of updates to the Wrangler's features and components, including its exterior mirrors, soft and hard tops, and interior fabrics and colors. In 2003, the automaker added new seats and a new optional four-speed transmission.

Jeep pumped up the Wrangler's off-road capability in 2004 with the introduction of the Wrangler Rubicon, which came equipped with such features as high-performance Dana 44 axles with locking differentials, a transfer case designed to provide more power at lower speeds, 16-inch alloy wheels, and large-lugged Goodyear tires. Power came from the same 4.0-liter V6, which now produced 190 hp and 235 lb-ft of torque. Ground clearance for the Rubicon measured more than 10 inches, with an approach angle of 45 degrees. The Rubicon was available in a standard version as well as a limited-edition Tomb Raider edition, which tied in to the second Tomb Raider movie.

Jeep also unveiled the Wrangler Unlimited in 2004. The four-door body sat on a 103.4-inch wheelbase, or 10 inches longer than the two-door version, which provided room for a second row of seats. The following year, Jeep combined the features of the Rubicon and the Unlimited to create the Rubicon Unlimited. That same year, the automaker also offered a Sahara Edition of the Rubicon Unlimited, which tied in with the movie of the same name. Unique features for the Sahara Edition included a chrome grille, premium two-tone seats, and Graphite Moab wheels.

The Wrangler's third generation, which sat on the JK platform, debuted at the 2006 North American International Auto Show for the 2007 model year. Jeep stretched the wheelbase for the two-door body style by 2 inches, to 95.4 inches, and increased the Wrangler's width by 3.4 inches. However, overall length decreased by 2.5 inches, to 152.8 inches, which resulted in improved approach and departure angles. Two- and four-door trims were again available, in X, Sahara, and Rubicon trim levels.

The third-generation Wrangler finally broke the mold on the original WWII version, and rolled out of the 20th century and into the 21st. Power windows were available for the first time, as well as standard electronic stability control, electronic roll mitigation, antilock brakes, and brake assist. The sole engine became a 205-hp, 3.8-liter V6 engine. Inside, a redesigned instrument panel and new steering wheel were among the updates.

In 2010, Jeep changed the name of the X trim to the Sport, and added two trim packages. The Islander package built on the entry-level Sport trim by adding larger wheels, unique Islander seats, a tubular entry sidestep, and a leather-wrapped steering wheel with blue accents. The Mountain package also included black exterior trim and graphite accents on the dashboard, among other features. A Rocky Mountain package, with a 6-CD changer, was available only in Canada.

Although beloved by fans, the Jeep Wrangler was often criticized by reviewers for its many faults. One, in particular, concerned the placement of the fuel tank. In earlier generations, the tank rode behind the rear axle, perilously close to the rear bumper, which represented a safety hazard in the minds of some critics. For the third generation, thanks to the Wrangler's slightly longer wheelbase, Jeep moved the gas tank in front of the rear axle. A stiffer frame and body, as well as such standard features as electronic stability control and roll mitigation, make the third-generation Wrangler a safer bet than earlier versions. Prospective buyers who value safety will therefore want to look at Wranglers built after 2007.

Reviewers have also complained numerous times through the years about the difficulty of retracting the Wrangler's soft top. One reviewer noted a 15-page section in the owner's handbook devoted to the sole topic of lowering and raising the top. Improvements in 1997 and 2010, in particular, were aimed at making the soft top easier to use. Again, prospective buyers should keep this in mind when evaluating various versions of the Wrangler.

The Wrangler has always been most nimble when it heads off-road, but those who seek an extreme off-road experience will want to seek out the better-equipped Rubicon trims, which include a range of upgraded features as well as a higher ground clearance for ultimate off-road driving. Similarly, the upgraded suspensions for the Wrangler's second and third generations helped improve a ride many still consider harsh.

Finally, exterior aesthetics make a difference with some buyers. Many decry the rectangular headlights of the first generation, for instance, and much prefer the round ones, which Jeep reverted to for the second and third generation. Only minor exterior styling differences and badging, however, distinguish the various Wrangler generations from each other. 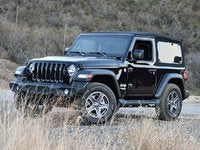 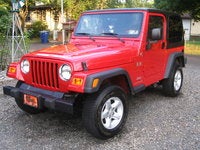 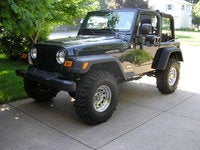 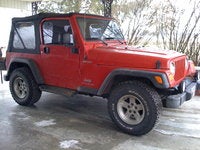 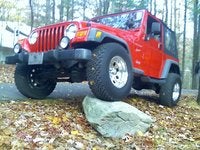 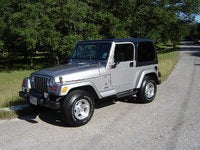 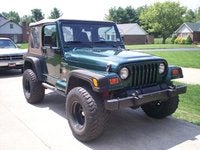 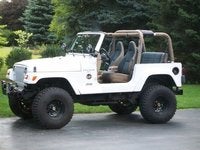 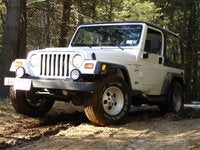 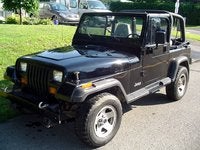 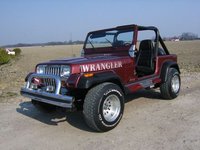 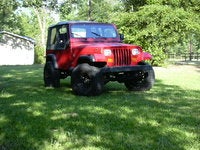 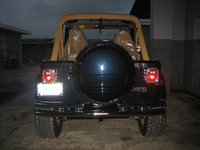 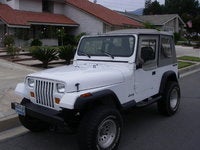 The pricing rating that Car Gurus provides was based on a $9,995 price that was featured. When you read the details of the sale it says that a $2,000 down payment was part of the price. This is no...

Is There A Way For Me To See The Messages Related To My Closed Listing?

‘02 TJ Cranks OK, But Will Not Start Without Using Ignition Spray

‘02 TJ cranks OK, but will not start without using ignition spray

HOW COULD A NON DEALER SELL CARS ON CAR GURUS