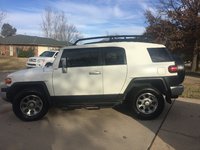 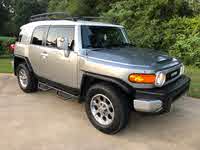 Why Can I Only Upload One Photo?

I could only upload my cover photo and none of the others. Please help.

4 views with no answers yet
5

why is my car showing overpriced at $36,900 while others show high or nothing at a high price. I have a special FJ Cruiser addition Ultimate Trail Team. Only 3 or 4 in the country forsale. There i...

Can this bolt be removed and replaced if so any advice would be great.

Can One Turn Off The Beeping Sound When The Car Is Locked Or Unlocked Using...

The Toyota FJ Cruiser, a compact SUV, was first introduced as a concept car in 2003. It generated so much excitement during the auto show season that Toyota put it into production and began selling the FJ Cruiser in 2006 as a 2007 model. The FJ Cruiser is styled after the FJ-series Land Cruisers from the 1960s. The FJ Cruiser competes with vehicles such as the Nissan Xterra and the Honda Element.

Retro elements on the FJ Cruiser include the front fascia (which include the word "Toyota" spelled out instead of the usual logo) and rear wrap around windows. It also sports a white roof and color-keyed interior features.

The FJ Cruiser makes the sixth SUV in Toyota's lineup. It is the second compact SUV for the auto maker, and is slightly larger than the RAV4. The FJ cruiser is more suitable for off-road than the RAV4.

The FJ Cruiser is marketed to a younger buyer, but it is too soon to say if they have taken the bait.