About the Toyota Tundra 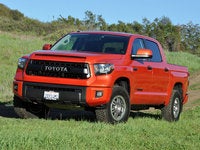 During the 1990s, Toyota's T100 pickup straddled the line between a midsize and a full-size truck. Although officially labeled a full-size vehicle, it didn't quite measure up to the dimensions established by such competitors as the Ford F-150, the Dodge Ram, and the Chevy Silverado, nor did it offer the same towing capacity. Although the T100 delivered good fuel economy with its V6 engine, it lacked the performance required for a true workhorse like the half-ton pickups from the the Big Three. The reaction from buyers was somewhat telling, as they bought hundreds of thousands of F-150s, Rams, and Silverados annually, while Toyota struggled to sell 50,000 T100s.

Enter the Toyota Tundra. Picking up where the T100 left off, the Tundra debuted in 2000 with a muscular exterior design and an optional V8 engine, as well as a comfortable ride and good handling that helped distinguish it from its more rough-edged competitors. While its dimensions and towing capacity still didn't quite live up to the numbers posted by the domestic full-size trucks, the Tundra received positive reviews overall and was named the North American Truck of the Year for 2000, as well as for 2008.

Currently in the midst of its second generation, the Tundra comes in Regular Cab, Double Cab, and CrewMax body styles, at Limited and Tundra-Grade trim levels, with three available bed lengths, as well as available four-wheel drive. In all, nearly 40 trim variations are available. Powerplants include a base 4.0-liter V6, which features variable valve timing (VVT) and churns out 236 hp. It's capable of towing a maximum of 5,200 pounds and gets an EPA-estimated 15/19 mpg. A 4.6-liter VVT V8 puts out 310 hp and raises towing capacity to 9,000 pounds. It manages fuel economy numbers of 15/20. At the top of the line, a 5.7-liter VVT V8 generates 381 hp and pushes the Tundra from 0-60 in just under 7 seconds. Towing capacity tops out at 10,300 pounds, while fuel economy numbers check in at 13/17 mpg.

Overall, the Tundra competes well with domestic trucks, although new generations of the F-150 and the Ram in 2009 raised the stakes in the full-size, half-ton pickup truck market segment. Both the F-150 and the Ram offer key features, such as Ford's Sync system, not available on the Tundra, and the use of some cheap materials in the cabin and the inconvenient placement of some controls on the dashboard top owners' complaints about the Tundra. In addition, the Tundra continues to come with a higher pricetag than some of its competitors (the Tundra starts at about $1,500 more than the F-150, for instance). Still, the Tundra's hunky exterior design, available V8 engines, good towing capacity, and solid ride and handling make it worth a look.

Despite a huge investment in development for the second-generation Tundra, which debuted in 2007, the truck hasn't sold as well as Toyota had hoped or expected. After selling nearly 200,000 units in 2007, fewer than 80,000 Tundras were sold in 2009, which represents a serious drop-off in sales. Toyota has no immediate plans to introduce a hybrid Tundra, although there are some indications a diesel powerplant for the Tundra may be in the works, which would push towing capacity to around 11,000 to 12,000 pounds. In addition, reports indicate the automaker plans to introduce a third-generation Tundra around 2014.

The Tundra caused some controversy right out of the gate. Since Toyota designed the Tundra to replace the T100 truck in its lineup, the automaker initially designated its new half-ton pickup as the T150, which seemed like a logical step. However, Ford objected, saying the name closely resembled the F-150, and sued the Japanese automaker. As a result, when Toyota's new truck appeared in showrooms for the 2000 model year, it wore the Tundra badge. Despite this minor glitch, the Tundra became Toyota's best-selling new vehicle, moving more than 100,000 units for each of its first two years in production, and doubling sales of the T100.

The Tundra's extended cab, which the automaker referred to as the Access Cab, featured rear-hinged doors and a three-passenger second-row bench seat with limited legroom for taller adults. The regular cab came standard with an 8-foot cargo bed, while the Access Cab came equipped with a 6.5-foot bed. The regular cab was not available with the longer bed, which again limited the Tundra's versatility when compared to some of its competitors.

Initially the Tundra came in V6-powered Base and SR5 trims, as well as V8-powered SR5 and Limited trims. Rear-wheel drive came standard, while an optional 4WD system was designed primarily for handling inclement weather and not for off-roading. While some domestic trucks came standard with rear antilock brakes, Toyota offered four-wheel antilock brakes for the Tundra as an option.

Antilock brakes became standard in 2003, however, and the Tundra received a few minor exterior updates that year, including a new, bolder-looking grille. Also in 2003, Toyota offered a new Stepside cargo bed for V8-powered SR5 and Limited trims with the Access Cab. The Stepside trims featured rounded rear fenders and elongated taillights, giving the Tundra a stylish, sweptback look.

In 2004, Toyota added a new Double Cab body style, equipped with four standard-opening doors. The Double Cab had a wheelbase of 140.5 inches and an overall length of 230.1 inches, which added more than a foot to the Tundra's standard length, and finally made it competitive in size with the domestic trucks. The Double Cab borrowed many of its exterior and interior design features from the Toyota Sequoia SUV. Unique features for the Double Cab included such options as traction control, a sunroof, and a DVD entertainment system.

For 2005, Toyota introduced a new base powerplant for the Tundra. The 4.0-liter V6 produced 236 horsepower, a noticeable improvement over the previous V6's 190 hp. In addition, the optional 4.7-liter V8 engine received variable valve timing, which helped it operate more efficiently while pushing horsepower to 282. A new six-speed manual transmission also debuted for 2005, replacing a five-speed manual from the previous years.

The second-generation Tundra debuted at the 2006 Chicago Auto Show for the 2007 model year. The new Tundra grew up in just about every way imaginable, starting with its wheelbase, which stretched to 126.8 inches for base trims with the regular cab, 145.7 inches for the Double Cab body style (which replaced the Access Cab), and 164.6 inches for a new four-door CrewMax body style. Overall length measured 209.8, 228.7, and 246.7 inches, respectively. The Tundra's interior remained largely unchanged, while the exterior received a more aggressive, muscular look with prominent flared fenders. In addition, the Tundra had a wider stance, which added to its hunky good looks.

Again the Tundra came in Base, SR5, and Limited trim levels, although now it was available with three bed sizes, including a new 8-foot-long bed, expanding the Tundra lineup to a total of 33 available trims.

A new 381-hp, 5.7-liter V8 engine also debuted for 2007. It pushed the Tundra from 0-60 in 6.3 seconds and joined the existing V6 and V8 powerplants in the lineup. Electronic stability control, traction control, and an automatic limited-slip differential all joined the standard feature list, while the standard antilock brakes also included brake assist and electronic brakeforce distribution. Bluetooth and a backup camera were among the new options.

By 2008, a total of 44 Tundra trims were available, primarily by expanding cab choices and bed sizes for the entry-level Base trim. The automaker also expanded the standard feature lists across all three trim levels. For 2009, Toyota added a new Tundra-Grade trim level, which slotted below the SR5 and expanded the lineup to 55 trims. In 2010, Toyota added the new 310-hp, 4.6-liter V8, and consolidated the lineup into 38 available trims at Tundra-Grade and Limited trim levels.

The Toyota Tundra maintains the highest resale value of any vehicle in its class, according to recent reports. However, due to problems with Toyota's build quality over the past few years, as well as the surge of interest in trucks from domestic automakers, the resale value for the Toyota Tundra has started slipping a bit in the past few years, which means this could be an excellent time for prospective buyers to look for used Tundras.

Buyers will most likely focus on Tundras built in the early years of the second generation, from 2007 to 2009, which were the peak years of Tundra production. That's reflected in the widening range of trims available during those years, giving buyers a long list of body styles, powerplants, and configurations from which to choose. The second-generation Tundra approached the size of its competitors, thanks to its stretched wheelbase, and came standard with a wide range of safety features, including traction control, electronic stability control, and antilock brakes.

Tundra trims built late in the first generation, from 2004 to 2006, also make good options for prospective buyers. More than 350,000 Tundras were sold over those three years, and while they weren't as well-equipped as the second-generation trims, they included the new Double Cab style, which proved particularly popular with buyers of new Tundras at the time. Base Tundras came with a new 236-hp V6 in 2005, making those trims good options for budget-oriented buyers. In addition, the Sidestep trims from 2003 will appeal to Tundra buyers seeking something a little different. 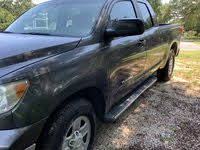 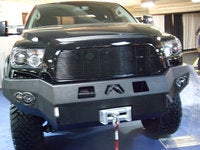 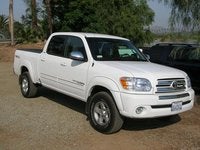 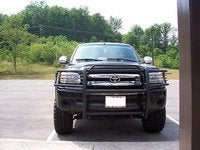 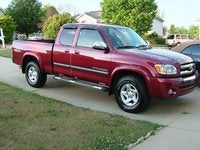 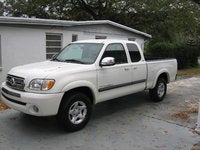 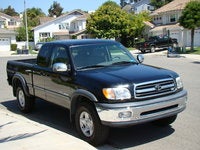 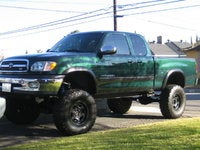 How To Stop The Offer Process?

I accidentally filled out offer information instead of listing information. How do I decline so I can list?

Toyota Tundra 2018 Will Not Start

Truck died when I hit a deep pot hole going down some rough road. Tried starting again and cranks strong but will not start. Looked for loose wiring or blown fuses. Was told it was an fuel cut off s...

What Does It Mean When The Check Engine Light, Trac Control, And 4LO Come O...

Yesterday the check engine light and trac control light came on. Also the 4LO light came on and is blinking. I turned off the car and restarted it but it was still there. After leaving the truck tur...

When towing our camper our truck will not go ove 60 mph and feels real sluggish. Why is this?