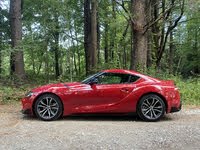 I've got a 1982 Toyota Supra (my first car) which has a cracked head. Dealer says I'd be better off with a rebuilt engine but having trouble finding one from a reputable parts dealer. Anyone have an...

What Is The Full Cost Of Posting?

Other than the cost of posting, do you charge a percentage of the selling price?

Guru9WDBSB asked a 2021 Toyota Supra 3.0 RWD General question about a year ago

HOW IS THE DEAL RATING OBTAINED ON POSTINGS

What Is Value Of 1987 Toyota Supra Turbo With Targa Top.

I would like to sell my Toyota Supra turbo. Manual 5 speed. Targa top. Suspension package. Electric package. I bought it from my brother with 2000 miles. Now has 98796. Never meant for collector but...

534 views with 2 answers (last answer about a year ago)

The Toyota Supra was introduced in 1979 as part of the Celica line. The Supra also descends from the 2000GT supercar, namely in the form of the engine. The first-generation Supra closely resembled the Celica in looks, only it was 1 inch longer and had an inline 6-cylinder instead of the Celica's 4-cylinder engine.

The Supra struck out on its own as a separate model in 1986, the third-generation Supra. The Celica went to front-wheel drive that year, but Supra enthusiasts were pleased to see that the Supra remained a rear-wheel-drive vehicle.

The Supra, especially the fourth generation, is popular for racing and was made famous by its starring role in the film "The Fast and the Furious."

Toyota halted sales in 1998 in the U.S. (although it continued production until 2001 in Japan), and despite rumors circulating that a new Supra is in the works for 2007 or 2008, it seems that Toyota has no plans for the Supra in the foreseeable future. However, Toyota's lack of a high-performance vehicle along the lines of the Honda S2000 or the Nissan Z helps these rumors persist.