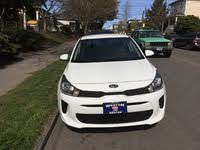 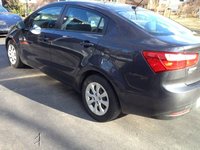 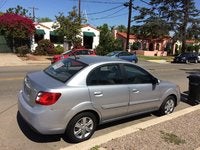 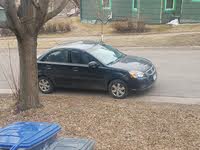 How To Change Fuel Filter

My 2006 Rio's AC condenser is in a bad shape and the replacement would be costly. Can i just...not replace it? Will it cause damage to other parts or is the only consequence that i have no AC?

Key Will Not Turn Ignition

Put my key in. It will not turn at all. What is wrong with it?

What Is Causing The Smoke, No Acceleration, And Now No Start?2008 Kia Rio L...

2008 kia rio lx automatic 1.6l engine. Son Was driving, had trouble accelerating, and then black smoke came from back of car, so he pulled over. Opened hood and it looked like oil had exploded all...

How To Register A Car

i need someone to regster my car when i get it

Once the cheapest car in America, the Kia Rio is a subcompact sedan and hatchback designed for budget drivers. Its small size makes good use of its 4-cylinder engine, and though base models are minimally equipped, higher trims and the sporty hatch come standard with enough features to make you forget this is an economy car.
The Rio emerged in 2001 as a sedan and Rio Cinco hatchback. Based on the Kia-built Ford Aspire, the Rio was smaller than Kia's inaugural U.S. compact, the Sephia. The first Rio featured a 1.5-liter, 96-hp DOHC I4 engine with a choice of 5-speed manual or 4-speed automatic. The engine got a little bigger and more powerful over the first few years, but the Rio essentially stayed the same. The front-wheel drive subcompact came in one trim. The hatch featured standard power steering, front console, rear defrost, and tilt steering wheel, which were only options in the bare-bones sedan. Front airbags were standard, and side airbags were never available.
A slight upgrade to the front end, suspension, dashboard, and introduction of cupholders and standard power windows occurred in 2003, but it wasn't until 2006 that the Kia Rio got a whole new look. The second generation, based more on the Hyundai Accent, carried a 110-hp 1.6-liter I4 engine. The overall size and interior space was bigger and more airbags were added. The hatchback was renamed the Rio5 (or rather translated, since Rio Cinco means Rio 5), and the sedan came in both a base and LX trim. Once again, the base had no air conditioning or power features, which you could find on the LX. In 2007, the sedan gets a sporty SX trim that carries many of the same features as the Rio5 SX.
Though it's purely no frills, the Rio's price tag makes it an attractive option for drivers on a budget. Good fuel economy and a decent engine (for the Rio's light weight) make it fun to drive and overshadow the strained acceleration and cramped backseat. There is supposedly a Rio hybrid in the works, but no date has been set yet for its release.