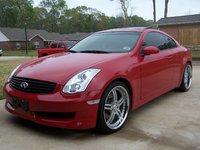 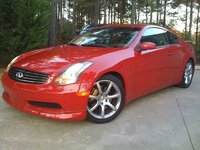 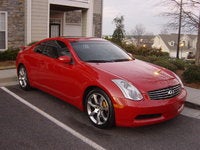 Car Dies After A Few Seconds, Alternator Been Replaced

Hi, I’ve recently got a g35 with a supposedly alternator problem. I’ve replaced the alternator, tightened the belt as much as I could with my hand and slapped everything back together. After that I...

Labor Cost To Remove And Replace Engine In 2003 G#%

Current engine about to give out with 240k on it. I can probably get a replacement for around $15-$1600, but need to have a reasonable idea of the labor to make the change. Thank you

Please Help If U Can.

3 Out Of 4 Windows Do Not Work

As for the 2007 re-design, Infiniti re-did pretty much everything on the G35. You'll find a new interior, exterior, and a more powerful engine. Bluetooth technology helps keep the G35 up-to-date.

Early reviews indicate that this sleek sedan has made progress and that the 2007 changes indicate another step in the right direction. The G35 still has some room for improvement in terms of interior room, trunk space, and handling.