I recently replaced the radiator in my 2004 dodge intrepid with a 2.7 liter engine and now it is leaking
transmission fluid. I have gone back over my work and checked the hoses and everything looks fine,
what could be the issue?

I have a 2003 dodge intrepid and my mechanic had replaced the coolant tank as well as another piece and idk the name of it but, its a square rectangular (small piece) that sits ontop and he said that under extreme pressure because the they made it cheap coolant can leak from it, i sent along a pick so you could see what im talking about (also check for hair line cracks) i had a problem with mine where the crack was so small 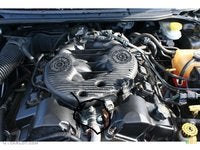 That spot u circled is the Thermostat housing inside that tube is a lil sensor for ur temperature of refrigerant. having same issues.

yup my 2001 Dodge Intrepid leaked there and had to replace that part. They said the glue that holds it together on the top wasn't good, should in my opinion have been a recall issue, but nope I had to have that part replaced. Now I have a temperature issue that seems to be another issue from another thread discussion. Need a vehicle to drive so can't yet replace it but will as soon as I have the $$ to do so. Sad though I love the car, the roomy truck and interior. We've put a lot of $$ into getting things repaired after a so called friends hubby worked on the issue you've identified. He ruined a lot of parts putting it in and it's cost me more than If we'd have had a shop do it in the first place. No more friends helping me repair my vehicles, got a sharp new mechanic that's reliable so at least I have that to look forward to once I have a newer vehicle than this 2001 Dodge Intrepid of mine Low miles though sad as it only turned over the 100,000 miles in May 2017. 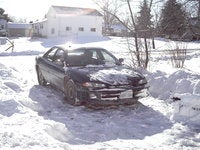 CarGurus has 74 nationwide Intrepid listings and the tools to find you a great deal.