My windshield wipers won't work.  The turn signal works and the washer fluid works, but the wipers themselves won't move.  Replaced the switch - still won't work.  Any ideas?  Please help!

Wiper motors might need replacing. I have a Plymouth Horizon & the same problem, but I'm fairly sure it's the switch on mine.

Ended up taking it to the dealership - it was a wiring problem from the body control module to the switch.

On the 1996 Chrysler T&C, the BCM controls the front wipers for delay and speed. You can still push the end of the control stick and the wash and wipe function should work. Also, your rear wipers should still work. If this is all true to the condition of your car, then the problem is an open resistor in the BCM. Remove the BCM, take off the metal circuit board cover and expose the circuit board - just 4 star screws hold the cover in place. Resistor #409 is key to the front wiper control circuit. The value of the resistor is 1.240 K ohm, 1% tolerance, 1/4 watt. Use an axial lead resistor to replace the tiny chip type flat resistor that is on the board. After soldering the leads flat to the board, use a dot of ATV or hot glue gun glue to hold the new resistor firmly in place. The resistor 409 is marked on the circuit board. The fact that resistor #409 opens is a known problem. The replacement resistor costs about 4 cents.

Great post autokarma!! It worked for me. I put a 1200 ohm in series with a 39 ohm resistor since that's what I had available. See photo. 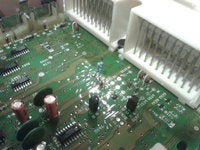 I have this same problem washer works but wipers won't come on when turned on and I know nothing about circuit boards,can't afford to take it to dealer as is I'm still making payments on vehicle from junky dealer,is there a way of wiring around the bcm thing jus to have wipers,everything else works.

GuruTZZMM answered about a year ago

GuruTZZMM answered about a year ago

GuruVS616 answered about a year ago

Mechanic showed me the RESET under the hood. Black casing.. 3 or 4th button. Started to work again.

GuruXRPJ8 answered about a year ago

Anyone know which resister goes bad on BCM on a 1999 Caravan? There aren't any marked with the number 409