About the Chrysler Town & Country 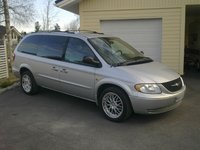 Chrysler, through its Dodge subsidiary, kicked off the modern minivan revolution in 1984 with the introduction of the Dodge Caravan minivan. Geared toward families who needed a functional vehicle with plenty of interior space and cargo capacity, the seven-passenger Caravan quickly became popular with buyers, and Chrysler began to spin off other versions. In 1987, Dodge introduced the Grand Caravan, which sat on a longer platform, and both the Caravan and Grand Caravan were also sold under the Plymouth Voyager and Grand Voyager brands. In 1990, Chrysler unveiled an upscale version of the Grand Caravan, and gave it the name Town & Country.

Prior to 1990, Chrysler used the Town & Country name for a variety of vehicles, starting in 1941, when the name was attached to a woodie wagon. The last non-minivan vehicle to bear the name was a LeBaron-derived station wagon in 1988.

Chrysler was the last member of the Chrysler/Dodge/Plymouth family to unveil a minivan bearing its badge. To distinguish the Town & Country from its stablemates, Chrysler equipped it with a number of upscale amenities, including leather upholstery, air conditioning, power windows and door locks, and an upgraded AM/FM audio system. Outside, such features as simulated woodgrain panels along the sides and a luggage rack on the roof helped the Town & Country stand out from its peers. It also sported a premium pricetag.

The fifth-generation Town and Country debuted in 2008, and for 2011 Chrysler unveils a mid-generation refresh, which includes such exterior updates as a new front grille and fascia, a redesigned Chrysler brand winged badge, a new hood, new LED taillights, and a revamped rear liftgate with curved glass. Inside, updated features for 2011 include a new instrument cluster, a new multifunction steering wheel, new soft-touch door and interior trim, and upgraded leather and cloth upholstery.

While most reviewers give the Town & Country good marks for its numerous standard features and innovative seating systems, such as the Stow 'n Go second-row seats, they also question the minivan's overall reliability and build quality. J.D. Power backs up this concern by giving the Town & Country a mediocre score of 5 out of 10 for reliability. On the plus side, the build quality of the Town & Country has improved somewhat over the years, and the 2011 mid-generation refresh may have solved some of the problems.

For the most part, Town & Country owners seem pleased with their purchases, and many are repeat customers of the vehicle. Current and past owners especially like the flexible seating options, excess of cargo nooks, seat comfort, and fuel economy.

The first-generation Town & Country debuted in 1989 for the 1990 model year. Essentially a rebadged Grand Caravan, the Town & Country sat on an extended version of Chrysler's S platform, giving it a wheelbase of 119.1 inches and an overall length of 190.5 inches. The Town & Country sat up to seven passengers in three rows and came equipped with a number of upscale features designed to differentiate it from Chrysler's other minivans, including leather seats, power windows and door locks, a premium audio system, and a luggage rack.

Chrysler offered the Town & Country in a single Base trim for 1990. Power came from a 150-hp, 3.3-liter V6, which the automaker had just added as an optional powerplant for the Grand Caravan. The V6 was paired with a four-speed automatic transmission. The engine sat transversely in the chassis and drove the Town & Country through the front wheels, eliminating the need for a driveshaft to the rear axle. As a result, the Town & Country displayed a low profile, which made entering and exiting the vehicle easier for passengers.

Like the Grand Caravan and the Plymouth Grand Voyager, the Town & Country borrowed many of its components, including its suspension, steering system, brakes, instrument gauges, and exterior trim, from Chrysler's K-car platform, which formed the foundation of such cars as the Plymouth Reliant and Dodge Aires. This helped keep development costs down and resulted in car-like handling and and a smooth, comfortable ride, which added to the appeal of the Town & Country.

For the second generation, the Town & Country sat on Chrysler's AS platform and had a wheelbase of 119.3 inches and an overall length of 192.8 inches. Exterior design enhancements resulted in a rounded, more aerodynamic look, while a unique chrome waterfall grille, exterior side trim, and alloy wheels helped distinguish it from the Grand Caravan and Grand Voyager. Inside, the Town & Country received Quad Command bucket seats as a standard feature, and antilock brakes were available as optional equipment. Power came from the same 3.3-liter V6 producing 150 hp.

For 1992, Chrysler added an optional all-wheel-drive system and included a driver's-side airbag and integrated child safety seats as standard equipment. In addition, buyers could order the Town & Country without the simulated woodgrain panels on the exterior sides. A passenger-side airbag became standard in 1994, along with an updated dashboard and instrument panel. In addition, Chrysler introduced a new 162-hp, 3.8-liter V6 engine for the Town & Country.

The third-generation Town & Country debuted in late 1995 for the 1996 model year. It sat on Chrysler's NS platform and featured a sleeker, sweptback look, with a redesigned front end leading to a long, low-sloping windshield, which flowed seamlessly into the low roofline. The wheelbase remained unchanged at 119.3 inches, but Chrysler stretched the overall length by 6.9 inches, to 199.7 inches. The extra length was primarily taken up by the longer nose.

For the first time, Chrysler offered the Town & Country in three trim levels, including the entry-level LX and the upscale LXi, both of which sat on the long wheelbase. A third trim, the SX, sat on a shortened 113.3-inch platform, which it shared with the short-wheelbase Dodge Caravan and Plymouth Voyager. Power came from either a 141-hp, 3.0-liter V6, which drove the entry-level LX and SX trims, or the 162-hp, 3.8-liter V6 engine from the previous generation, which drove the LXi.

All Town & Country trims produced through the 1996 model year featured a single sliding door on the passenger side, providing access to the second- and third-row seats. For 1997, Chrysler added a driver's-side door, which became standard. In 1998, the Town & Country received a mid-generation refresh, with a new grille, front fascia, headlights, and bumpers. In addition, the 3.8-liter V6 received a bump in horsepower, to 180 hp. Chrysler also changed the name of the upper-level LXi trim to the Limited and equipped it with a redesigned third-row bench seat, which featured more support for passengers.

In 1999, Chrysler replaced the second-row bench seat with reclining bucket seats, and in 2000, the automaker dropped the short-wheelbase SX trim from the lineup. A rear-seat video entertainment system was added as an option in 2000.

When the fourth-generation Town & Country debuted in 2000 for the 2001 model year, it sat on Chrysler's RS platform. Wheelbase remained the same at 119.3 inches, but overall length increased to 200.5 inches. Chrysler made minimal updates to the exterior, giving the Town & Country a more aerodynamic shape, and added a new entry-level EX trim, which slotted below the LX, LXi, and Limited. New features included a power liftgate and a removable center console. The automaker boosted power for the 3.3-liter V6 to 180 hp and for the 3.8-liter V6 to 215 hp. Ride and handling improved, thanks to the new platform with an updated chassis and suspension.

New options for 2002 included power-adjustable pedals, rear-seat audio controls, and a DVD entertainment system. In addition, Chrysler added a new entry-level eL trim, which slotted below the EX. The eL and EX were available only with front-wheel drive, while the LX, LXi, and Limited trims were available with either front- or all-wheel drive.

Chrysler continued to adjust the Town & Country's trim lineup in 2003 and '04, adding a new Base trim in '03, which sat on the short wheelbase. The following year, in 2004, the automaker dropped the eL and LXi trims, and added a new Touring trim. In addition, Chrysler introduced a limited-edition Platinum Series in 2004, which buyers could apply to the Touring trim. New options for '04 included a one-touch power moonroof and a 6-CD changer.

Chrysler added Stow 'n' Go seating to the options list in 2005. The system made it easy for owners to fold the second- and third-row seats completely into floor-level storage compartments, increasing the minivan's cargo capacity. However, some reviewers found the Stow 'n' Go seats uncomfortable for adult passengers due to the thinness of the seats' padding. The automaker also made a few exterior styling updates in '05 and dropped the EX trim from the lineup. By 2006, the Town & Country trim lineup included only the Base, LX, Touring, and Limited trims. The Base model had a wheelbase of 113.3 inches, while the other three trims sat on the longer 119.3-inch wheelbase.

The fifth-generation Town & Country debuted at the 2007 North American International Auto Show in Detroit and appeared in showrooms for the 2008 model year. It sat on Chrysler's RT platform, with a wheelbase of 121.2 inches and an overall length of 202.5 inches. The exterior received a more angular design, with a new grille and flared wheel wells. Chrysler dropped the short-wheelbase Base trim from the lineup, leaving the LX, Touring, and Limited trims, all sitting on the longer-wheelbase platform.

A new 240-hp, 4.0-liter V6, which powered the Limited trim, joined the lineup for 2008. Other powerplants included a 175-hp, 3.3-liter FlexFuel-capable V6 and a 197-hp, 3.8-liter V6. Electronic stability control and traction control were added as standard features. New optional features for 2008 included Swivel 'n' Go seating, which enabled passengers to swivel the second-row captain's chairs around 180 degrees to face the third-row seat. Stow 'n' Go seating and a third-row power-folding seat are other options that give owners a number of available seating configurations.

In 2009, Chrysler added a 25th Anniversary Edition of the Town & Country to commemorate the automaker's launch of the minivan in 1984. Other than that, the Town & Country remained largely unchanged for 2009 and 2010, leading into the mid-generation refresh in 2011.

Prospective buyers have quite a bit to choose from when shopping for a Town & Country, especially if they focus on the fourth generation (2001 to 2007), which offered a wide range of trim levels, powerplants, and features. Entry-level trims like the eL and EX made the Town & Country more affordable while maintaining some of its upscale features, while the upper-level LXi and Limited trims came well equipped with such features as leather upholstery.

Buyers who require the ultimate interior flexibility should seek out Town & Country trims produced after 2005, when Stow 'n' Go seating became an option. However, some reviewers find the Stow 'n' Go seats uncomfortable and recommend the Swivel 'n' Go seats instead, which were optional starting in 2008.

Chrysler offered the Town & Country with optional all-wheel drive starting in 1992 and with electronic stability control starting in 2008, so owners who place a premium on safety and stability should seek out trims with those features. Similarly, buyers who seek optimal fuel economy will want to look at later-year trims, such as the 2008 to 2010 trims equipped with the 3.3-liter V6, which provided a good balance of performance and efficiency.

Finally, buyers should keep in mind that the Town & Country shares most of its features with the Dodge Grand Caravan and the Plymouth Grand Voyager, as well as the shorter-wheelbase Caravan and Voyager. While the Town & Country comes better equipped and displays some minor exterior styling differences, it shares the majority of its components with the other models. By expanding their searches to include these other models, buyers can perhaps find better deals. 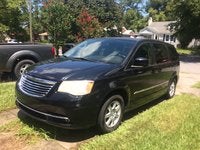 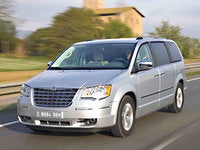 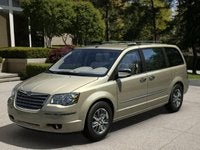 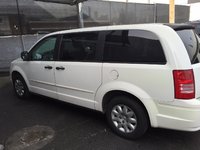 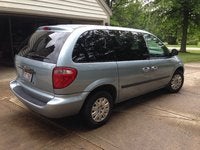 How Do I Stop My Fuse From Blowing

My fuse keeps blowing every time I use my key fob to lock or unlock my doors. How do I make it stop?

8 views with 1 answer (last answer about a week ago)

How Do I Map Update?

how do I update map software

What Should The Timing Be At Idle For A 2.4L Chrysler Engine