I have a 1996 Mercury Grand Marquis that I bought from my grandpa after
my grandma passed. Since I've had it, the auto climate control unit randomly
turns itself on. It would turn on on start up, even if shutoff before car is shut
off. I would then turn it off again, and it would shortly turn itself back on. After
a few times of this it would usually stay off. Sometimes it would randomly turn
on while driving. Recently my blower motor stopped running, and the HVAC
control does not turn itself on after starting the vehicle. Is it likely that this
could be a related issue? Does anyone have access to the wiring diagram for
this vehicle? Any help is greatly appreciated, thank you.

all will go full screen 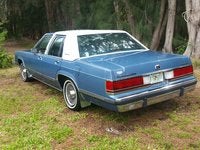