Took my truck bout 3 months ago to a trans shop to get trans rebuilt.got it back.3 days later. After 2 weeks it started leaking Hyd fluid. Called and took it back on a tues. Got it back Thursday,

After a month, again, Hyd leak.  Called and took it back on a tues?.got it back on Friday
and was told it wasn't quite done but I could drive it but to bring it in next tues because of
holiday backlog and that their closed on the weekends. Took it in on tues and got it back
the next morning. This is the kicker!..the next morn, I jump in my truck,..I turn the the key
and hear loud thump and then a whine..I'm freakin pissed..I look under the truck and lo
and behold..there a bolt lying on the pavement with the tip sheared off, no sign of the
other bolt and the starter hanging! I call the guy and he says "it sounds like the starter"
And that he never touched the starter. I told em you guys dropped the trans each time I
bought it in. "Except for the trans, My truck was running good with no probs until you
guys got a hold of it."  I've talk to friends and ck'm forums about this and was told the
same thing..you drop take off the starter b4 dropping the trans. So help guys.
88 chevy cheyene c1500 standard cab v6 4.3L

Yes, the starter is taken off to remove the trans. Depending o the leak they may not have removed the trans to fix the leak. But the initial rebuild for sure

besides the initial rebuild, When I bought it in the third time, they dropped the trans, cause the owner himself said they replace something in the trans gear/bushing/ring that was causing the leak. Now fast forward to end part of the story where the worker says he never touched the starter rebuild or otherwise. He was so defensive like he was hiding something even as he was saying this to me on the phone. The owner left for the mainland after they so called fixed my truck last week and won't be back til tues. I'm ready to call my lawyer. What do you think

I'm surprised they don't offer to fix it. Worst case scenario is new bolts and you have to extract the broken one. It's not going to be difficult. Do you have paperwork showing what they replaced? What is the time line for all this work? 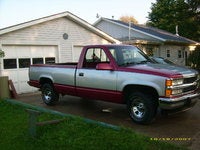