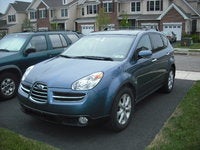 What do that code means

Cruise Control Flashing Anti-skid On And Check Engine On

Car Over Heating And Having Engine Problems

car will over heat while parked or in ideal. I have replaced the thermostat and radarior. The car can only be driven in manual mode or sport mode can not drive it normal.

Why Is My 2007 Subaru Tribeca Having Shaking Issues

Hello i have a 2007 subaru tribeca b9 and i just got my 6 spark plugs and ignition coils replaced but im have same issues as before the check engine light is blinking and the crusie control is blin...

Just introduced in 2006, the mid-sized crossover SUV Subaru B9 Tribeca is Subaru's first seven-passenger vehicle and biggest model in its lineup. It hopes to attract those who like the performance and luxury of the Legacy, but who need more passenger space. It is actually based on a Legacy platform, but with a wheelbase three inches longer, and a weight topping out at 4200 pounds.
The 2006 B9 Tribeca, named after the New York neighborhood, has all the Subaru familiars -- a flat-six engine, all-wheel drive, and loads of interior conveniences. It is powered by a 3.0-liter, 250-hp V6 engine and a 5-speed automatic. Base models start with two rows of seats for five passengers, but an optional third row can be added. The second row conveniently moves back and forth to provide more legroom, and both second and third row fold flat.

The front end of the 2006 Tribeca caused a bit of uproar with its all-new triangular grille, meant to resemble an airplane fuselage. This has been redesigned for the 2007 model. The interior is high-end, with a curved dash that flows into the center console. Dual zone climate control, heated seats, a navigation system, power seats, and a remote are just some of the luxurious features. ABS, traction control, and stability control are also standard.
So far, the styling receives high marks from owners, who also appreciate the smooth and confident handling of the B9 Tribeca. It's major drawback is low gas mileage, but that is to be expected of any SUV. Though the third row is too small to be comfortable for adults, owners appreciate the extra storage space. For 2007, besides the revised grille, the B9 Tribeca will also get improved suspension, with stiffer shocks and struts.