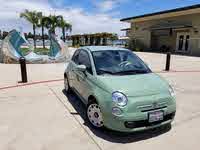 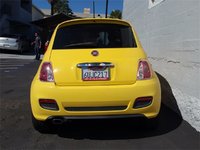 Has anyone experienced a 29 second lockout after trying to open the boot 10 times? This is a repeatable problem. It always locks out after 10 tries as long as the 29 seconds has passed. It also see...

Is there a bulb or LED that lights up to indicate the AC has been turned on. Is this difficult to repair.?

Trunk Will Not Open

we used car all day yesterday with no problems at all. now this a.m. the trunk will not open with/without remote. any suggestions??? i can't find a release in trunk going in thru back seat???

Need Replacement Bulbs For The Licence Plate Light For My 2012 Fiat 500 Lou...

Need replacement bulbs for my license plate light. Dealer says they are not available and that I should purchase a new handle and light...$320 installed. Does anyone know a better solution?

Following a successful path blazed by Volkswagen and BMW's MINI, Fiat has reintroduced a classic subcompact that achieved legendary status in the '60s, the 500. Announced in mid-2006 and launched in July 2007, the new 500, also known as the Nuova 500 or Cinquecento, was greeted by a quarter-million people at an event that also marked the 50th anniversary of the original 500's launch.

The new 500 gets built in Tychy, Poland, and like the new Beetle and particularly the MINI Cooper, offers a wealth of customization options that mostly impact looks as well as a very strong safety profile. Four trim levels, 12 exterior colors, 15 interior packages, and a variety of exterior decals allow more than 500,000 individual combinations, so buyers can make the car very much their own. The new Fiat features seven airbags and offers ABS, electronic stability control, traction control, and a hill-holder feature, and it has earned top safety ratings in Europe.

Fiat has said it will bring the 500 to the U.S., but the current economic crisis has put those plans in question. Other stated plans include production in Italy and North America, a hybrid version, an even smaller, more-efficient engine option, and a convertible, which has already been caught in spy shots.