i have a 91 ford ranger 2.9 that has very high fuel increase it wont take fuel at full throttle  the engine keeps stalling expecially when going down hill and it just sounds like you cut the key off on it ive changed multiple sensors includiing the tps,timing, pressure regulator, relays ive even changed the fuel pump itself and still cant find the problem all spark plugs wires distributor cap and rotary button are brand new as well also hooked to a computer and was unable to read i do have a check engine light on

we connected it and it read as non responsive

so it fuel injected are your injectors new

it doesnt have carb. engine its a fuel injection engine

no the injectors are as old as the car

Two different areas for you to check here, all common to the Ranger 2.9 engine. First, with it idling, remove the vachum hose off fuel regulator, and see if fuel is gushing out of the connection where the hose goes. A bad regulator will allow fuel to enter the vachum hose, and flood the engine and make it hard to start and stall a lot. Also, next area will be to check for a code for intermittent reference pulse, meaning the profile pickup in the distributor is failing. Sometimes a pip signal error, and either one could be the thick film ignition module on distributor, or the mag pickup.

Ok, when the distributor was replaced, it has to be timed properly, what I mean is when engine is on tdc ready to fire cylinder one, the distributor must point to cylinder one. There is a special cut in the tone wheel in there, at number one that signals injectors. In the old days a distributor could be installed with pointer at any cylinder, and we could just switch the wires. If its out of position, the injectors may be spraying either a cylinder early or late, which will cause rich running, and stalling, and often hard starting. If those are covered, then watching fuel pressure that it holds when key is turned off. If it doesn't, could be a leaking injector. Next would be checking the coolant temp sensor. Ive seen these bad yet not set a code.

Also....brain fart....yours likely has the MAP sensor, a sensor measuring manifold vachum to base fueling off of. They are tricky to test, using a digital ohm meter with rpm function. Easiest to just replace it. Check that the vachum hose is connected and in good shape. When you replace it, pull the battery cable for 10 minutes or so to force the computer to relearn.

In 1990 some went to mass air flow meters, and some didn't, so you will either have a map sensor or mass air meter.

Luis answered about a year ago

I have a 1988 ford ranger i changed fuel pump and relay. All fuses are good but i get no power to any of the pump wires? 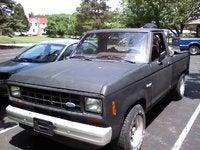