value of my 71 Thunderbird

Hi there, i have a 1970 thunderbird GT fastback in London- UK and also own a 1971 Thunderbird 2 Door Landau on the Island of Cyprus. As far as i am aware there are only five 70-71 T-Birds in existance in the UK and i have the only T-Bird in Cyprus. Recently i shipped the 71 T-Bird over to Cyprus from the UK but customs are having trouble to value it for duty purposes, even though EU law states that i should not pay duty from one EU country to another, Cyprus gov. make their own rules up! What would be the value on these cars nowerdays? I'd need a 'real' selling value and also a value to tell the customs officers, as they will try to make me pay as much as they can, even though it's illegal what they are doing under EU law and get fined every year by the EU for trying to make people who ship vehicles for personal use from other EU member states pay duty. My T-Birds are both originally from Florida and are nice examples with plenty of history.. i await your reply...thanks. 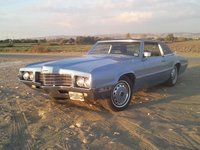 What size engine do you have? Engine size can affect the value of these cars up to 65%.