I have a 2002 corolla that I need a new engine for and I have heard the 98-02 engines have had a lot of problems with oil consumption and I wanted to know of this is true or just a shop trying to get me to buy a newer engine?

My car seemed to burn through a lot
of oil before the rod broke.

http://www.youtube.com/watch?v=cDK743Z3WaI just one of many. this one actually tossed a few prices at ya-

Why don't we step back, take a breath and tell us the story. What happened to your old engine? What choices were presented to you as replacements? How much?

I've check around for motors and one shop said that the 98-02 motors burn oil like crazy after 100,000 miles up to 1qt every 100 miles. Another shop said all Japanese engines burn oil eventually and that he can fix my engine. And the last shop said that Japanese engines don't have problems and only the American ones have them. I just want to know whose telling me the truth that way I know what year engine to get

Jasper engine rebuilds are excellent. go to their site for prices-

You heard wrong. the 98 thru 02 engines are FE and GE series and have never been known for oil consumption problems or any other serious issues, I have a corolla. View from drivers seat 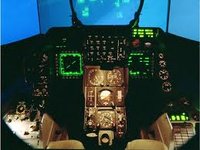 hey dave, there isn' t a steering wheel. Guess those are not needed. drive by wire. Analog gauges? hey...this is like an F14 type aircraft type....?

F 16 actually, and it is fly by wire, the stick does not move in an F 16 it is pressure sensitive only, the pilots didn't like that at first but once they got used to it, not moving, they swore by it. OK I quit, no more of this has nada to do w/cars...just being silly this morning....@Ryan, if that is true it's the first time I ever heard it. I know people with late 90's Corollas with 200,000 plus without that problem. Some consumption, but not anywhere near what you describe. Thats is a gallon of oil on one tank of gas. No way, maybe in a few individual cars out of hundreds of thousands, I dunno maybe million but NOT the norm. A mechanic sure, will tell you he can fix it, for HOW MUCH? ALL Japanese cars? THINK Ryan, if that were true would you see so many Toyotas, Hondas, the list goes on..on the road? Toyota has no peers in reliability in the affordable class of vehicles.

How is the rest of the car. It's a eleven year old Corolla. Is there rust? Are the brakes good? Has it been maintained? If the car is marginal, think about installing a scrap yard used motor. That should be around $1500-$2000 installed. Some yards will install them.

@tenspeed the car is still in great shape and well maintained and I've found a 02 motor with only 20k miles on it for $1750 installed. I just heard it was a bad motor year but according to David there are no problems and what I heard from a guy out east wasn't true

tenspeed I am interested in your take on that. I have never heard of a car going through a gallon of oil each tank of gas unless it has broken ring(s) or something like that even a ten year old one

At the risk of correcting llregal in his first sentence 2 posts up, it's more than good it is superior.

careful, remember. 'everything is beautiful'...etc.

This is my first Toyota, I bought it on reputation and what I do know is that it has far more power than I thought it was going to have, 16 valve 1.8L will spin front tires from a dead stop. On ice. I discovered that anyway

...including the resonations from the '73 Gremlin steering that would rip the control out of your hands for lack of a steering dampener (they didn't think of that).

"in it's own way, like a starry summer night or a snow covered winter day"

the '73 Celica with the five speed---talk about cruzin...the 18R let go for lack of oil changes, but was quickly replaced by another, but the front struts pushed the hood because rust had eaten away the frame/chassis and nothin to weld to but air...at nineteen, we tried--using bed frames, sheet steel and anything else...we were poor...but still alive!

the first time I ever witnesses Timing Chain Destruction, beyond reconciliation. Recently my 22RE (an American made engine) let go the timing chain. The chain crunched around a bit comprimizing the casting what is the oil pump. Put 'er all together with the better half of an oil pump....and Wazaa....still sounds like a coffee can full of marbles, but is that way from wear, good oil pressure...excellent!

Rod lettin go and punchin thru was a 400 chevy motor, the replacement did not have a pan so's had to sculpt with hammers, then weld. The new 400 had a bent crank, but otherwise ran ok. Sized for a 230. the gas tank was too small for a 400, and had NO Power steering, for with a truck, fully loaded makes this a daunting task. My fist Chevy, a 66 standard pickup. bought it fer five hunderd-

no one else wants to share "tales of dirty rotten motors"...too saucy!

OK my brother in law had a 1976 F250 w/390. One day the oil filter exploded. Everywhere. Split and oil lost, fortunately only a block from home. OK, no problemo. Put on another oil filter. And of course oil Started truck and that filter exploded within 10 seconds.... turned out to be a bad oil pump. We didn't try a third filter, we are dumb but not that dense.

I have a 2001 toyota corolla that has 110,000 miles on it and it uses oil at 1 quart every thousand miles. I believe the engines in these car for the years are bad engines.

I have a 2002 Toyota Echo with 260,000 miles. It uses 1 quart of oil every 1,000 mies or less. The engine is still peppy and strong. I don't see any blue smoke. No oil in the water and no water in the oil. It still gets 40 MPG. I would like to get the engine rebuilt or buy a replacement engine. Which is the best way to go?

From a mechanics perspective, all engines when they have had lengthily use or sporadic maintenance can have piston rings that will wear. This will cause leak-by in the cylinder and oil will burn off in the combustion chamber. It is normal but will rapidly degenerate and can become a serious issue if not maintained or treated. New piston ring replacement is required and then all is needed is the head gasket, head, to be reinstalled and the valves to be lashed. This can be excessive to non-grease monkey types, but it’s not all that difficult to do. DIY with a shop manual will save you plenty.

This discussion is very old, but I will chime in becuase of my experience with my 2002 Corolla. It has 200K miles on it and it runs OK, but it burns oil like CRAZY. This kind of depends on how hard I accelerate and the way I drive it though. Sometimes I'll put in a quart every week. I have heard that oil burning was a problem with my friends Corolla as well which is a 2001. (The 2001, 2002, and 2003 Corollas are all the same vehicle.) Was considering engine replacement for mine also.