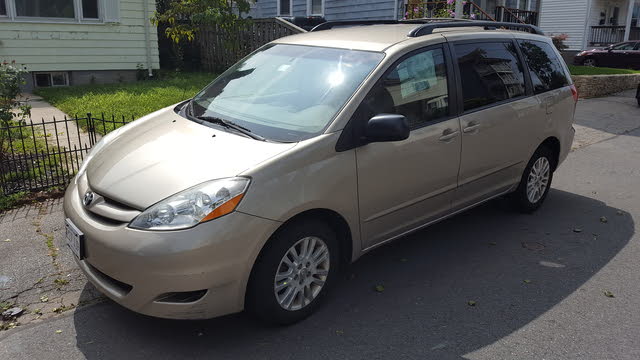 Offering plenty of room, a decent selection of standard features, and a wide array of options packages, the 2010 Toyota Sienna remains among the best selling minivans on the market.

The 2010 Toyota Sienna, though not quite up to the standards of the Honda Odyssey, is nevertheless a family-friendly minivan that’s long on quality and reliability. Unfortunately, the 2010 Sienna is long on price as well. A significant redesign due for 2011 ought to refresh its aged styling and add to its status as one of the better minivans on the market.

Though a significant redesign had been rumored, the 2010 Toyota Sienna is essentially unchanged from 2009. Word has it, however, that Toyota will implement some major upgrades for the 2011 Sienna. Meanwhile, the 2010 Sienna remains a well-built, more-than-adequately equipped, seven- or eight-passenger, five-door minivan available in four trim levels: the base CE, LE, XLE, and the top-shelf XLE Limited.

The 2010 Sienna offers decent acceleration and reasonable fuel efficiency from its standard 3.5-liter V6 in combination with a five-speed automatic transmission, while virtually all reviewers agree that the Sienna’s ride and handling are about average for this market segment, meaning, essentially, somewhat less exciting than Honda’s Odyssey. Though the Sienna CE is offered only with front-wheel drive (FWD), the LE, XLE, and XLE Limited trims are available in either FWD or permanent all-wheel-drive (AWD) configurations, a distinct advantage in areas prone to wintry weather.

Finally, the CE and LE trims are offered with unique, removable Front and Center second-row modular seats in the eight-passenger configuration. Most reviewers find the second-row seats, whether the modular ones or the standard captain’s chairs, unwieldy, at best, to install and remove. Once the second-row seats are removed, however, and the third-row seats folded flat, a whopping 149 cubic feet of cargo space are available in the 2010 Sienna. 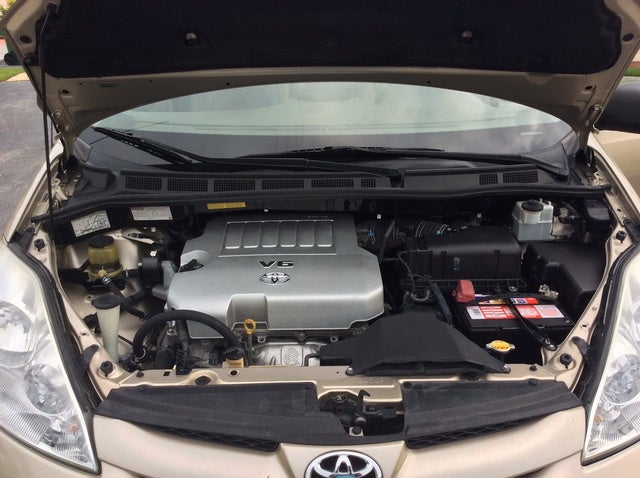 Only one engine and transmission grace the entire 2010 Toyota Sienna lineup - a 3.5-liter DOHC VVT V6, managed by a five-speed automatic, featuring electronically controlled overdrive with intelligence (ECT-i). This combination puts out 266 hp at 6,200 rpm and 245 lb-ft of torque at 4,700 rpm, and is rated by the EPA to deliver 17/23 mpg in FWD, and 17/21 in AWD.

The 2010 Sienna is rated to tow 3,500 pounds when properly equipped, and has been timed from 0 to 60 in an eye-opening 8 seconds. Indeed, most professional reviewers report better-than-decent acceleration from the 2010 Sienna for highway merging and passing. Better yet, the 2010 Sienna runs just fine on regular unleaded gas.

With a MacPherson strut front independent suspension, front and rear stabilizer bars, and a torsion-beam rear suspension, the 2010 Toyota Sienna delivers a smooth highway ride and acceptable management of bumpy or uneven roads as well. The 2010 Sienna CE, LE, and XLE trims sport 16-inch wheels, while the XLE Limited mounts 17-inch wheels. Professional reviewers find no significant differences between the two wheel sizes. Reviewers find, as well, that the 2010 Sienna’s body lean when cornering and noseplow when braking hard, which are common to all minivans, meet or beat most competitors’ standards.

Braking and steering are described by most reviewers of the 2010 Sienna as adequate, if not inspiring. A disconcerting softness to the brake pedal doesn’t detract from sure stopping, nor does a numb feel to the wheel take away from feeling in control on the road.

As with nearly all minivans, indeed, even with most full-size SUVs, the third-row bench seat in the 2010 Sienna is adequate only for kids or small pets. The consensus is, however, that the 2010 Sienna handles trips across the country and to the mall with equal aplomb. 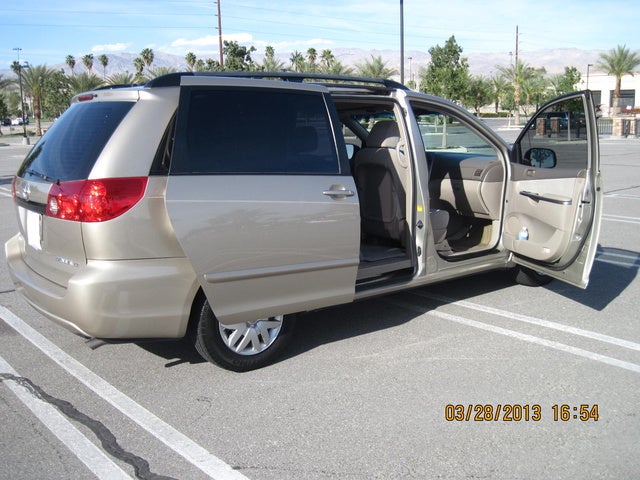 While not loaded with luxury, the 2010 Toyota Sienna packs enough appearance and interior features and options to impress and to satisfy most reviewers, not to mention family-van aficionados. Starting with the base Sienna CE, such standard offerings include front captain’s chairs, removable second-row captain’s chairs, split-folding third-row seatbacks, power door locks and mirrors (but, curiously, not power windows), a tilt/telescoping steering wheel, front and rear air conditioning, and a single-CD player with six speakers. 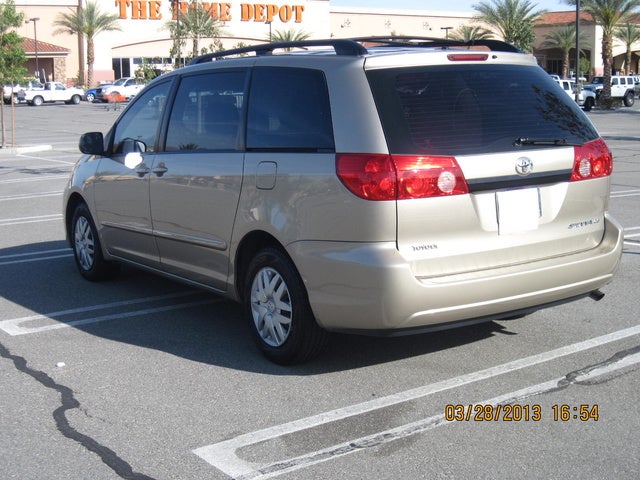 Issues that owners have with the 2010 Toyota Sienna include the lack of a six-speed transmission, its initial price and confusing options packages, heavy and bulky second-row seats, making removal and re-installation difficult, and the inefficient placement of some of the Sienna’s controls. Some also wish the engine had more beef. Additionally, many owners would like to see Toyota introduce a hybrid Sienna.

On the positive side, owners of the 2010 Sienna praise its roominess, ride comfort, fuel efficiency, braking capabilities, and the power-sliding doors offered on the mid- and high-end trims. Additional laudable features of the 2010 Sienna for some owners include the JBL premium audio system, DVD navigation, and Bluetooth features, as well as its decent handling characteristics, fuel economy, and safety features.

Barrett Quiet Ride, smooth over bumps, quiet engine. VERY comfortable leather seats! Nav system is a bit clunky to use, especially with the restrictions it engages when the car is in drive. I hate that.

Have you driven a 2010 Toyota Sienna?
Rank This Car

Sienna Beeping When Car Is In Gear

My 2010 Toyota Sienna beeps when I put it in gear. It does not beep while in park. The beep is similar to the seat belt warning beep or the door-open beep. I fastened all of the seat belts and made ...

What Should I Do About My Minivan That Was In An Accident Before I Owned It...

I purchased a minivan on April 2018. October 2018, I brought the van into the dealership I purchased it from because of noise and it was driving funny. The Service Advisor adamantly told me I was in...

Have a 2010 Sienna CE with 196000 miles. It developed a slow coolant leak about 3 weeks ago. Overheated on the highway one time, and then saw coolant smoke from under the hood. Couldn't identify w...

Sienna 2010 has 66k miles, never has a problem until late two days ago on Highway. We first heard a little bit noise, then check engine, VSC, and Trac off lights were on. We pulled over and turned ...

I have Toyota Siena 2010 2 wheel drive. When I start the car most the symbol in the dashboard start flashing ex.; the check engine, the air back, (!), and course control. Also when I am driving the ar...