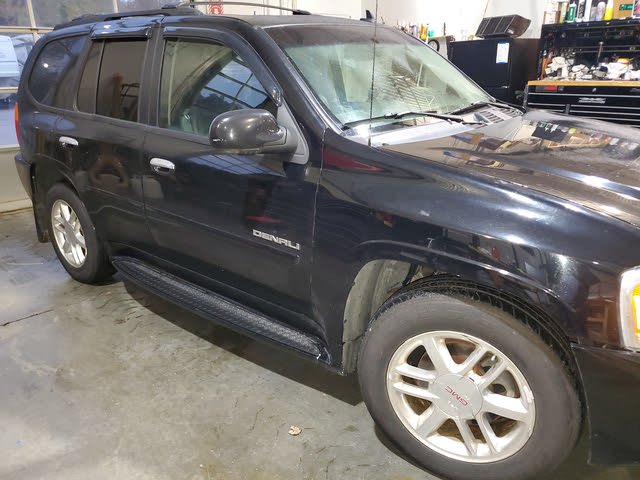 Looking for a Used Envoy in your area?

The 2009 GMC Envoy’s top-tier suspension and engine make for a completely enjoyable SUV that can haul 6,600 pounds with ease, and do so in comfort and style.

While it’s expected that the top-of-the-line trim will be an upgrade from base and midlevel, it shouldn’t be such a jump that the other two seem almost obsolete, which is sadly the case with the 2009 GMC Envoy.

Time is running short for GMC's Envoy, and it looks like 2009 will be its last model year. If you absolutely must have one, opt for the Denali. The suspension alone makes the price jump well worth it.

A full-frame SUV is about to become a rare thing, and the GMC Envoy is one of the last of that breed. Even so, the latest word from GMC projects 2009 to be the last model year before the unibody Acadia takes over its slot.

Available in SLE, SLT, and top-tier Denali across rear-wheel- and four-wheel-drive platforms, the Envoy seats five and has two available engines. In this last year of production, a carryover from 2008, Bluetooth will be newly available before the Envoy and those that share its platform get eliminated. 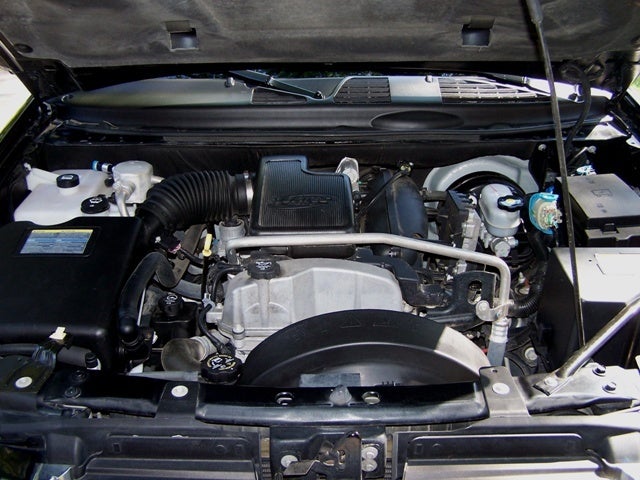 SLE and SLT Envoys feature a 4.2-liter, 285-hp inline six, while the Denali gets a 5.3-liter, 300-hp V8. Fifteen extra horsepower doesn’t sound like much for two additional cylinders, but the real treat comes in the 45 extra lb-ft of torque available at 4,000 RPM. Both engines come mated to a four-speed automatic and are rated at 14/20 mpg, although testers have found the average mileage of a rear-wheel-drive Envoy barely gets above 15.

Either engine is plenty powerful from a stop, passing, climbing, or hauling, although the 5.3-liter is especially stout from a stop and in towing. Additionally, it utilizes GM’s Active Fuel Management cylinder deactivation, accounting for the matching mpg ratings. The transmission has received particular praise for its smooth and responsive behavior, and the 4WD can be used wet or dry and dropped into a lower gear for off-road use. Both engines offer a 6,600-pound towing capacity.

Expect considerable wallow and wander with the SLE and SLT Envoys, not to mention body roll and lean in anything but the most relaxed cornering. The Denali’s load-leveling suspension does much to combat this, but nothing to address the vagueness in the steering, the only good point of which seems to be the turning radius.

Intrusive wind noise from the mirrors and sunroof, even when closed, are a huge disappointment. Again, this is helped considerably by the added insulation in the Denali. In all, the Envoy handles like a truck. The problem is that it doesn’t handle like all the other trucks out there today. It handles like trucks from yesterday: poorly. With crossovers and general unibody design fast becoming the standard, we’ve just come to expect more.

Plenty of room and comfort all around make sitting in the Envoy a pleasurable experience, for drivers tall and short. While the front buckets provide more than adequate comfort and support, it should be noted that the rear split-bench seat will surprisingly sit three adults in comfort, even for longer trips. Shorter drivers have the option of adjustable pedals as well, although they’ll have a bit of trouble looking past larger-than-average headrests and roof pillars when gazing rearward.

While the imitation wood in the SLE and SLT fails in its attempts to portray luxury - and the Denali’s leather and trim do little better - the dashboard and controls are a pleasure to use, intuitive and convenient. The second row folds down with automatic retracting headrests to provide over 80 cubic feet of cargo room, and when up, leaves just a half-inch less headroom than the front seats.

Choosing an SLT will give you lots of features over the SLE, including leather upholstery, heated front seats, a power passenger seat, and driver-seat and mirror memory. You’ll also enjoy a Bose sound system, Bluetooth, mirror-mounted turn-signals, polished alloys, and more. Denalis get a limited-slip differential, power-adjustable pedals, an almost necessary load-leveling suspension and appearance bits.

The Envoy comes standard with dual front and curtain side airbags, four-wheel discs with ABS, an antiskid system and rollover sensor, a tire-pressure monitor, and daytime running lights, and both SLE and SLT have a limited-slip differential as an available option.

The 5.3-liter engine and the load-leveling suspension in the Denali are big selling points, as many owners complain of a disturbing lack of refinement in both the standard engine and suspension. Numerous points of praise are found in the Envoy’s controls, which are both attractive and intuitive, although some have complained of spongy brake feel.

GuruHYYT6 I've owned 3 Jimmys and I was so happy with them. Is this SUV comparable?

Have you driven a 2009 GMC Envoy?
Rank This Car

Looking for a Used Envoy in your area?

driver door window will go down, but will not go up, all other windows work fine

Alternator Gauge Going Up And Down But Battery And Alternator Are Both Bran...

I have a 2009 GMC Envoy/Denali- V-8, and I am on the THIRD alternator- two rebuilts and a brand new one since February of this year, plus a brand new battery. Here is what is going on. I thought t...

I have a 2009 gmc envoy. The headlights on my envoy have gone out on low beams and remain operable on high beam. I have replaced the lights, but the problem still persists. Has anyone had this pro...

I just had my rear seal replaced a couple months ago and know they had to pull out the transmission to fix it, it's been running a bit funny since then..but I went to put it in reverse and my shif...

My 2009 GMC Envoy Turns Off Without Notice At Idol And/or Drive. Could Some...