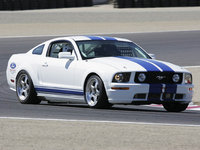 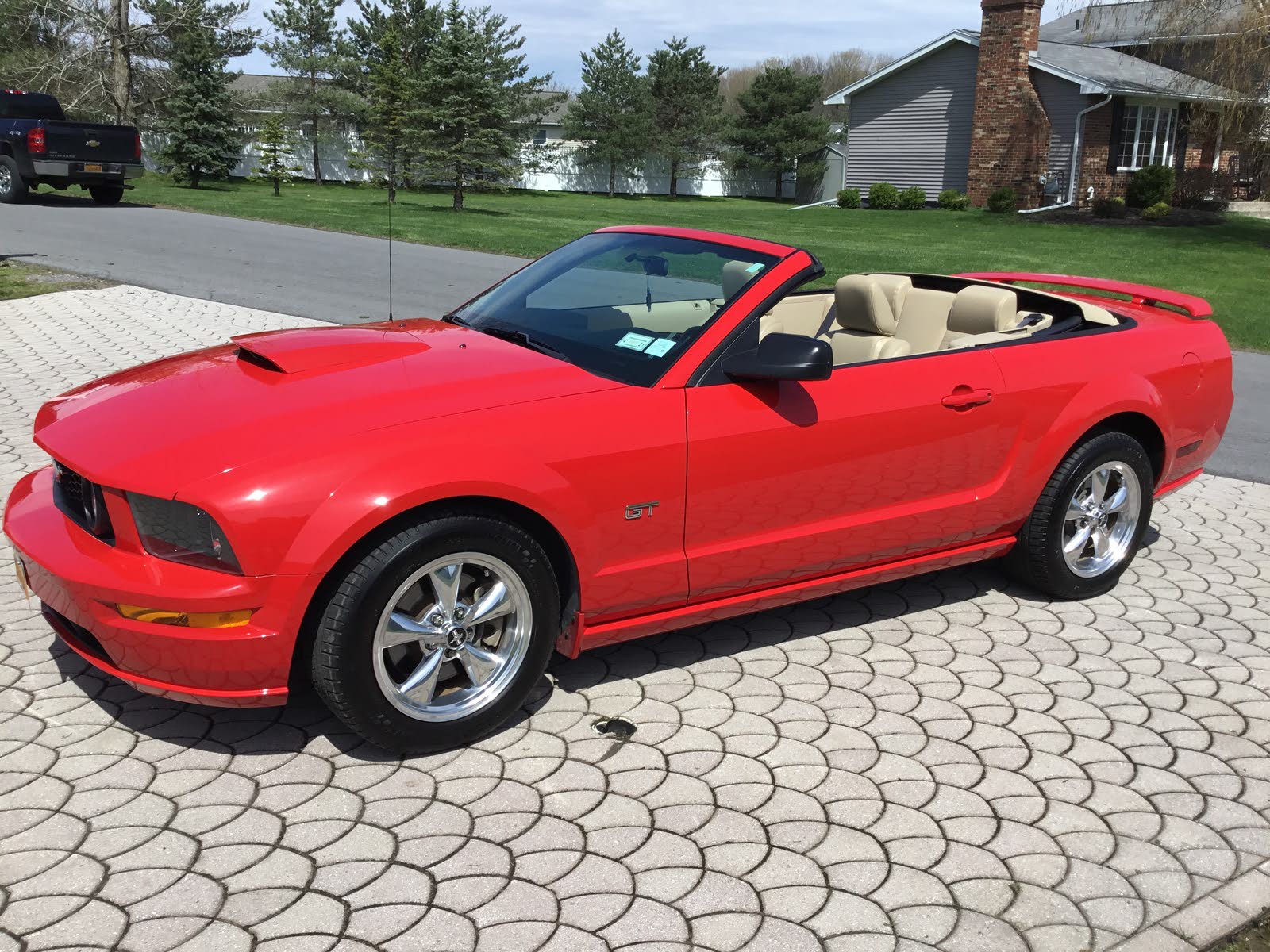 Since 1964, the Ford Mustang has been the go-to car for Americans who want to look good with a couple friends and maybe, if they've spent just a bit more, tear down the road with a grumbling V8 engine. It's a value play, too, and in that sense, the Mustang has just gotten old. So for 2005, Ford ditched the chassis that dated from the late 1970s and re-engineered nearly everything under an immediately recognizable shape. The Mustang is reborn, again. 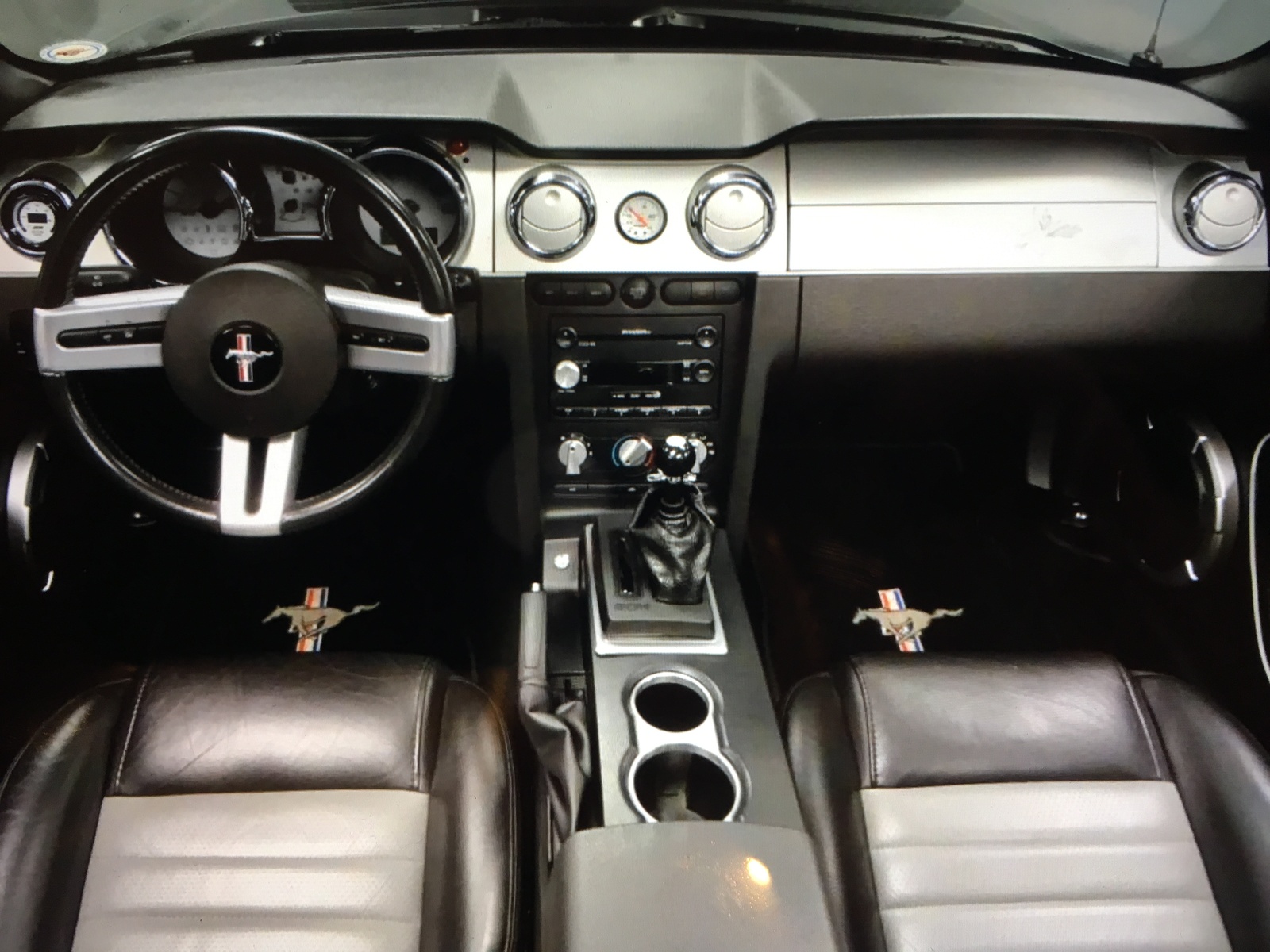 While Ford's other retromobile, the 2002 Thunderbird, didn't catch critical acclaim like the Volkswagen New Beetle, the 2005 Mustang is careful not to dip too deep into the high-school yearbook. Ford designers took inspiration from early Mustangs like the 1967 Fastback and the 1970 Mach 1. The round headlights, deeply inset grille, another set of big round lights in that grille, vertical three-bar taillights, and a roofline with that familiar rear-quarter glass all mark this a Mustang. Retro touches like the chrome-plated circular emblem out back (no Ford logo in sight) and multi-spoke wheels with chrome spinner caps look just as good today. Sure, it's a streamlined modern car without chrome bumpers. But no other car looks this unique.

The interior really goes hard on the old-style cues with super-thin typefaces for the red-needled gauges, again deeply inset like the grille (they can glow in dozens of colors the driver can select). A T-bar grip for the automatic transmission or a short, polished chrome ball for the manual are both straight out of a Jimi Hendrix concert. Four circular air vents, a wide strip of aluminum running across the cowled dash, and a gorgeous three-spoke steering wheel has silver accents and big gaps between the spokes. Is the material quality great? Not really—but then again, this is a car that starts just over 20 grand. What befits a modern Mustang are big speakers in the doors that can output up to 1,000 watts of power. Else, it's classic rock and roll, either as a coupe or convertible. 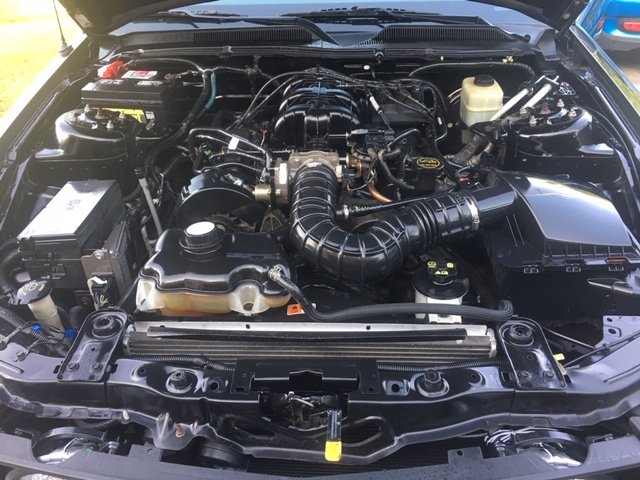 Two engines deliver more power than the 2004 Mustang's powerplants. The base 4.0-liter V6, shared with the Explorer, makes 210 horsepower and 240 pound-feet of torque. It's now passable as a sporty car, only the tires don't grip well. If you have the choice, choose to rent a V6 Mustang and buy the GT, which comes with a proper 4.6-liter V8 good for 300 hp and 320 lb-ft.

The 2005 Mustang may be wider and enjoy a longer wheelbase for more stability, but this is the only sports car sitting on a live rear axle meant for trucks. Even the Explorer, an actual truck, uses an independent rear suspension for better control and more secure handling. The Mustang's rear end is defiantly old school. Off the line, this can result in axle hop when really mashing the throttle and it also exacerbates the Mustang's stiff ride. Yet, handling is so improved with the new car, as are the larger brakes, that it feels nimbler and sharper than ever before. Only the previous-generation Mustang Cobra will out-handle the new GT. 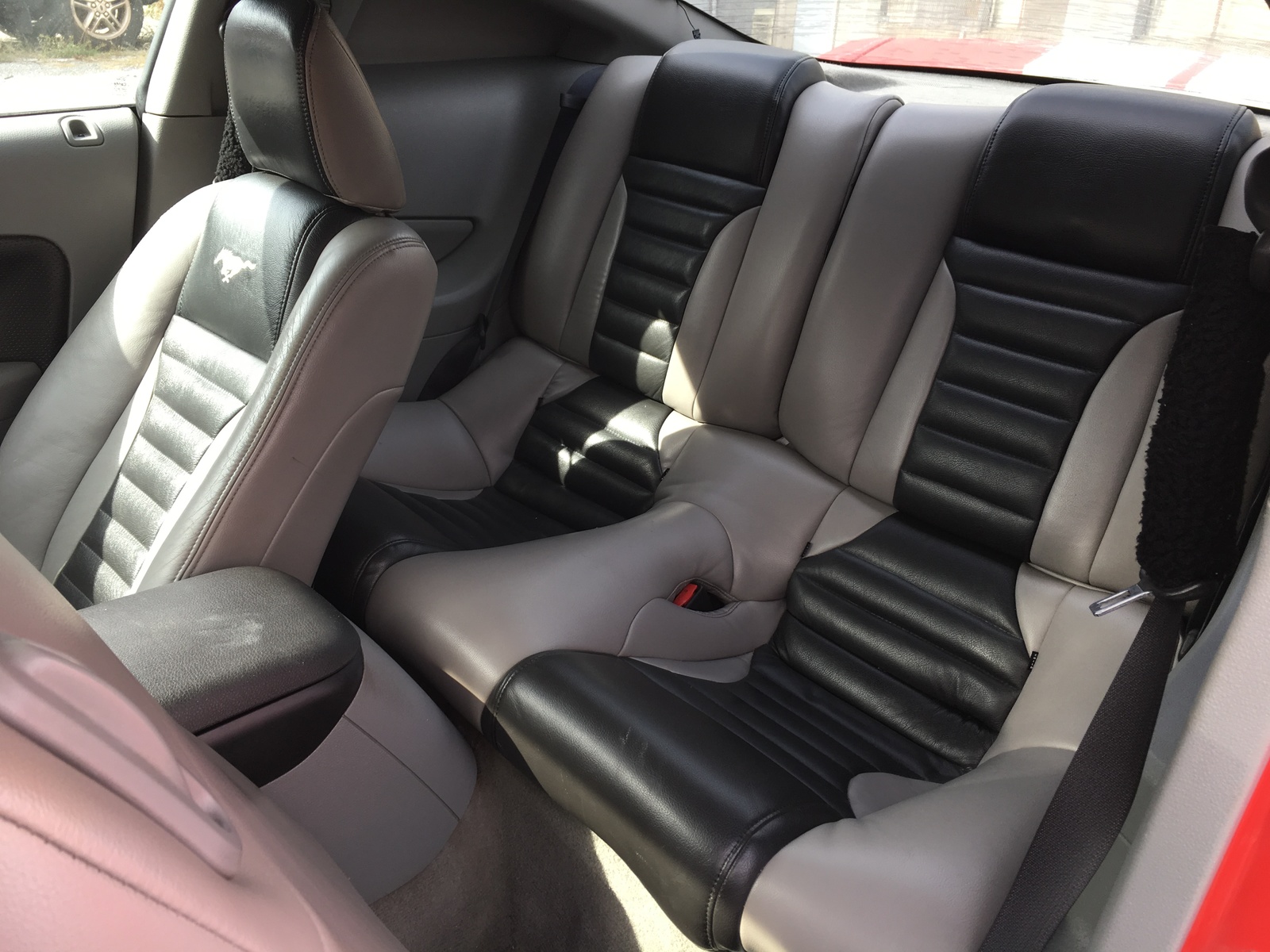 Trunk space is up two cubic feet to 13, and there's a small pass-through to the rear seats—which are somewhat more spacious than what you'll find in a Porsche 911. The convertible has a power top with manual latches and a heated glass window. Everything but the instrument cluster is easy to read—the retro type is just so skewed and borderline illegible. Else, you'll find ordinary controls in the Mustang in the ordinary places. This is a car built for driving, and that mission is entirely fulfilled. 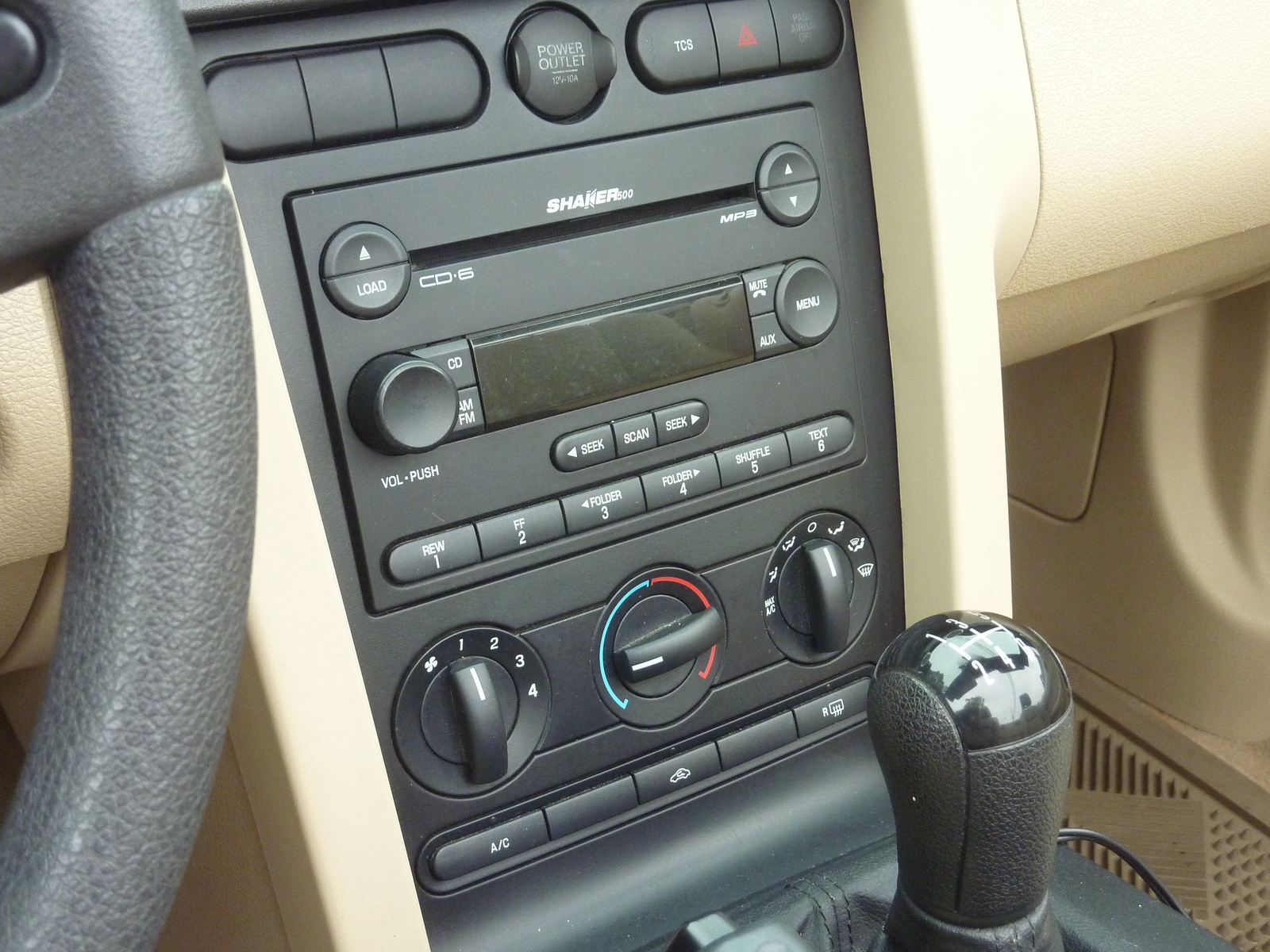 The base Mustang V6 Deluxe comes with power windows/locks/mirrors, keyless entry, cruise control, an AM/FM/CD stereo, a tilt steering wheel, and 16-inch alloy wheels. A Premium package brings a six-way power driver's seat, six-disc CD changer, 500-watt Shaker stereo, and the chrome spinners on the rims. Leather and the multi-color instrument panel are optional. The GT just brings fog lamps, traction control, rear spoiler, and the V8. You won't find navigation, Bluetooth, or much of anything electronic except a 1000-watt Shaker stereo with subwoofers in the trunk. Priorities. 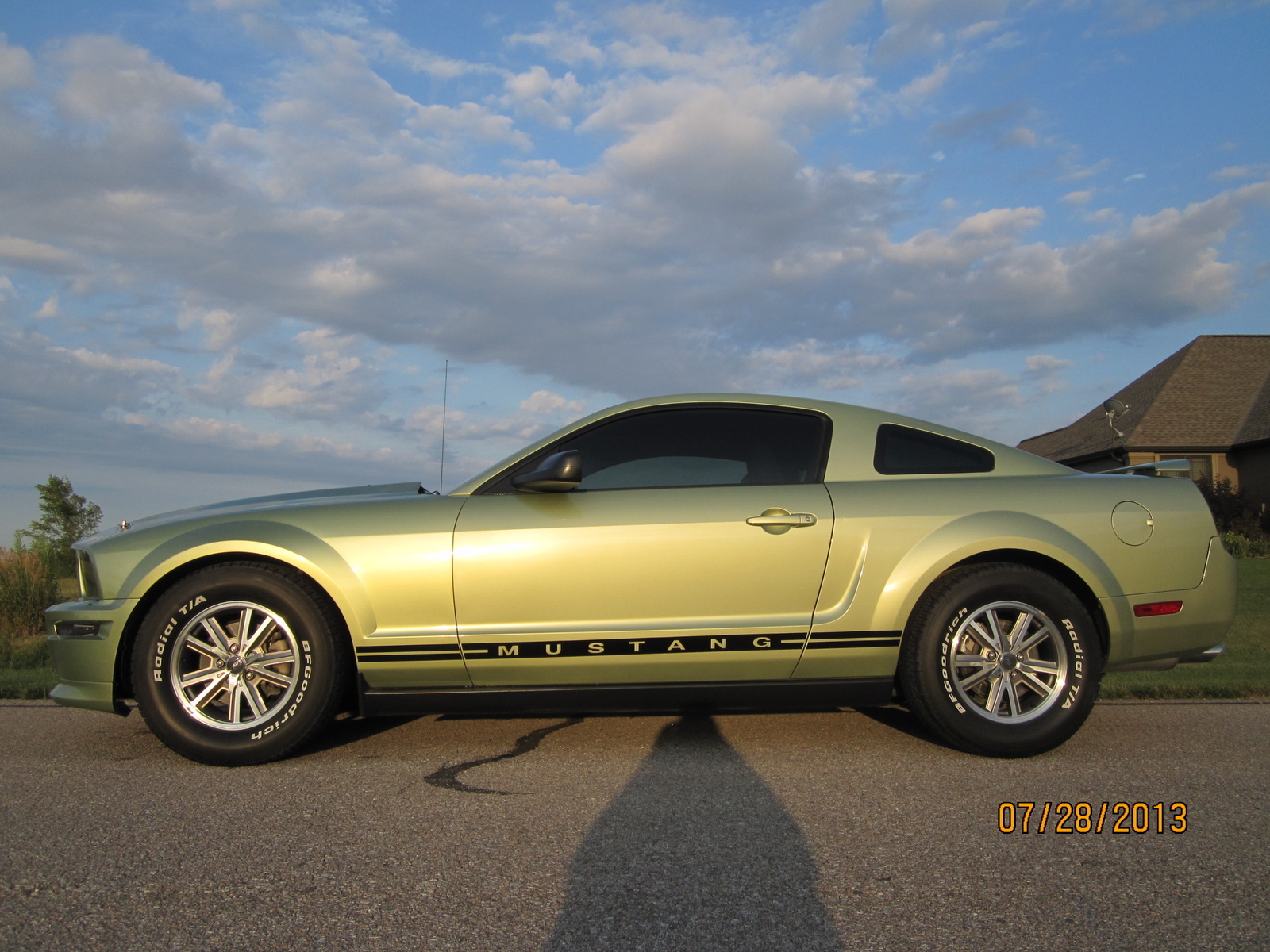 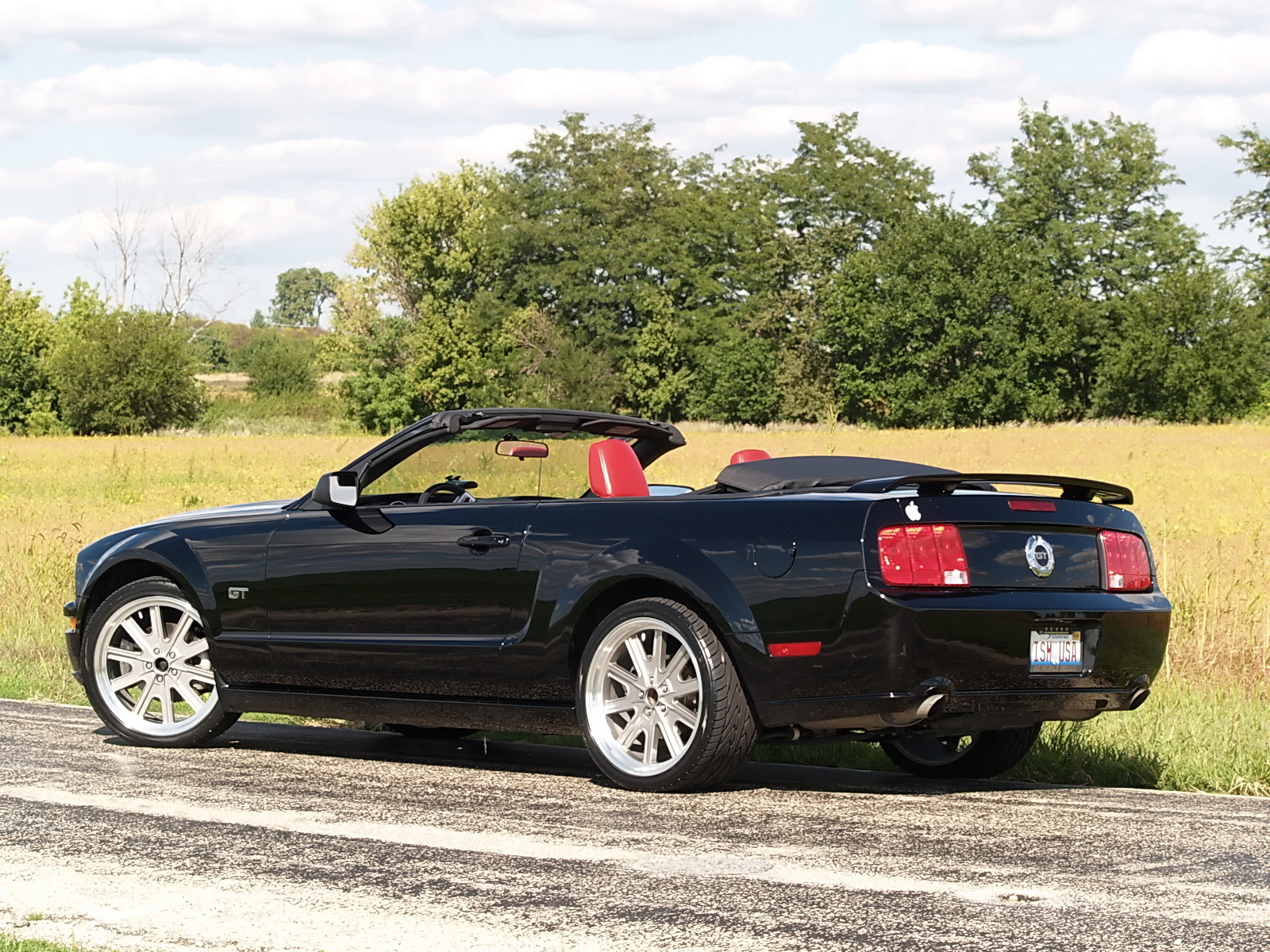 The 2005 Mustang starts at $19,890 for the Deluxe V6 coupe and runs up to $30,745 for the GT Premium convertible. Fuel economy adjusted to modern EPA tests is 15-17 mpg city, 22-26 mpg highway, and 18-20 mpg combined. While lacking in safety equipment and technology, the Mustang succeeds in being a modern take on an old-fashioned theme, and no other car in its segment can claim its lineage.

Users ranked 2005 Ford Mustang against other cars which they drove/owned. Each ranking was based on 9 categories. Here is the summary of top rankings.

Have you driven a 2005 Ford Mustang?
Rank This Car

my 2005 Mustang v6 won't start when the weather is hot until after opening the doors and cooling off the interior. The engine is not hot from running, but the car is hot from sitting in the sun. Why...

I Have A 2005 Ford Mustang GT That Needs A Part Replaced What Part Should I...

I have a 2005 Ford Mustang GT that needs a new harmonic balancer, But the one I bought from Autozone was to large, my mechanic told me. So I was wondering what's one that I should buy that would fit...

Can Someone Help Me?

Car starts fine and runs but after I drive to about 3 to 4 places it wont start up again and I have to wait for about 30 min then it will struggle to start then wait 10 more mins and it fires right...