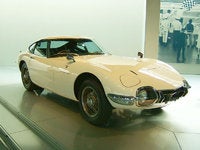 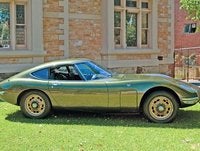 The Toyota 2000GT is considered to be the first Japanese "supercar." Toyota made them in very limited numbers beginning in 1967, and they were quite a departure from the typically practical, no-nonsense Japanese car on the market. The car was designed and developed by Yahamah, and had originally been in discussions with Nissan to produc e it.
The 2000GT is very distinctive looking. It is reminscient of a Jaguar, only with a curvy front end and smooth, flowing lines. It is almost bumper-free, with headlights directly on either side of the grille (pop-up headlights were also included to meet U.S. standards.)The interior included real wood paneling.
Only a little over 300 2000GTs were produced from 1967 to 1973, with only about 60 making it to the U.S. It sold for the then sky-high price of about $7,000. It is now highly collectible, and today a mint condition 2000GT can fetch over $100,000 at auction.
The Toyota 2000GT has also had a place in pop culture, most noticably in the James Bond flick You Only Live Twice. The film featured a specially retrofitted convertible 2000GT, which was never actually sold. In the Japanese cartoon Sailor Moon, one of the main characters also drives a 2000GT convertible.