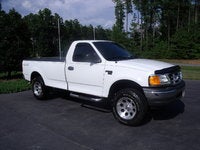 What Is The Difference Between The 2004 F150 Heritage Model Compared To Say...

have a 1995 heritage f150 single cab 96" bed 5.0 engine standard stans. but cant seem to find a drive shaft listed for this truck

is it worth replacing O2 sensor before plugs and plug wires when engine runs rich, little rough idle?

Engine compartment got wet and when I went to start the truck check engine light is on my overdrive light is flashing. Idles just fine but when I put it in Drive it has no power

The 2004 Ford F-150 Heritage is one of the great moments in marketing from the guys in Dearborn. You have to hand it to them: instead of calling this the 'Ford F-150 Leftover', they came up with the 'Heritage' moniker to make these pickups sound classy.

To be honest, the '04 F150 Heritage is actually a good deal for bargain-conscious buyers. What happened is that it was easier and more cost-effective for Ford to switch production gradually over to the redesigned 2004 Ford F-150. In order to differentiate the 'old-style' F150s that were still being produced in 2004, Ford created the one-off 'Heritage' brand.