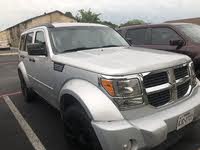 What Other Engines Interchange With The 3.7 Engine In This

My motor is blown in my Dodge Nitro and I would like to know which ones interchange with a 3.7 that's in it

Is There Any Steps That Need To Be Done After Replacing The TIPM?

I replaced the TIPM in our Dodge 2008 Dodge Nitro with a plug and play TIPM from Autozone because it started showing all the symptoms like flashing headlights, honking horn, failure to start, locks no...

I have changed heater core, Water pump and blend door actuator and still have no heat on drivers side

Could My Water Pump Pulley Be The Problem?

I have replaced the tension assembly, serpentine belt, and compressor and whenever I turn on the air the belt still squeals. The water pump pulley looks worn and very shiny. My question is could t...

13 views with 5 answers (last answer about a year ago)

Where Is The Inertia Switch In A 2008 Dodge Nitro?

297 views with 4 answers (last answer about a year ago)

The Dodge Nitro was launched in 2007 as a midsize SUV with a boxy-yet-sporty look. It's based on the Jeep Liberty, and has an old-school body design atop the sturdy truck-style platform. Compared to other midsize sport utility vehicles, the Nitro is on the smaller side, and reviewers praise it for its maneuverability.

A high roofline and rectilinear profile translate to plenty of headroom, legroom, and cargo capacity. They're also a nod to the Nitro's Jeep roots. The front grille, on the other hand, is all Dodge Ram; the fierce-looking front end seems a little misplaced on this cartoony bodystyle.

The Nitro's fuel economy isn't terrible for a two-ton vehicle, but compared to the Ford Escape or the Saturn Vue, it's a bit of a gas-guzzler. Still, it's got its charm, and the folks at Chrysler have high hopes for the new brand.