My 1997 Nissan Maxima GLE has recently got "service engine soon" light popped up.

I checked the codes from Autozone. They are:
P0500 - Vehicle Speed sensor.
P0600 - AT communication error
P0325 - Knock sensor related

I went to a local Nissan dealer couple of times for this. He told me only one code(speed sensor) Got ripped off with no proper diagnosis. Got speed sensor replaced. Still it is showing the same code. Now he is asking for changing the odometer for the same error code. That rang a bell in my mind: "Was the Speed sensor really faulty at first place?" And all he is telling the things one after another.

When I told the dealer that I got 3 codes instead of one from Autozone. He replied : "Sir, we are authorised and certified Nissan Service center and we have sophisticated equipments from Nissan"  Second time I went to same guy he showed me 2 codes. He told me it's a new code from the last time. And everytime diagnosis fees were charged. It's like trial and error method.

All I need is: Someone who can thoroughly diagnose the issues (all at once), and fix the things at reasonable price.

Can you folks guide me as what should I do? (Instead of getting rid of it :-))

I would take this to a different dealer or someone who specializes in imports, besides a dealer. The codes you are indicating could be related to a broken wire or faulty TCM. The VSS code may come from the transmission control module being unable to receive input from the speed sensor -- and along with that, the AT Communication error code would result. The knock sensor code may also come from the fact that the knock sensor cannot get info about vehicle speed, so it is unable to tell if the engine is knocking or not based on the vehicle's speed. For example, a broken wire on a transmission solenoid to my wife's 1999 Saturn caused a "crankshaft position sensor" code -- because the crank position sensor didn't know where it was supposed to be relative to what info it was receiving from the TCM. Your VSS may not have been defective at all, but it sounds like this dealer has not done the proper diagnosis to make any parts replacement at this point. I would not change the odometer at this point because it sounds to me as though the problem is TCM/wiring related and not related to the odometer. Short answer: take it to someone else. The car is old enough that they won't need "the most sophisticated equipment from Nissan" to diagnose this -- just a willingness to fix the problem and track down the real cause, instead of swapping parts and praying. :)

alot of 97-99 maximas had wire harness problems.not saying it is but sounds like they don't want to fix the whole problem

Sinkis, Do you have a resolution to the problem. I have the exact same problem with my 97 Maxima SE. It's been serviced twice so far. I've had the wiring harness checked and the speed sensor replaced and I'm still having the the same problem. The next recommendation was to either replace the TCM or the ECM which can be pretty costly.

I wish I could help on the other codes, but I wouldn't worry about the knock sensor code, as almost every Nissan I've diagnosed has that code stored along with others, like a ghost code. I've never been able to figure out why.

The speed sensor was replaced and I still have a periodic loss of of the Speedometer, Odometer, and Trip Meter. It seems to happen when the car is first started on a cool evening. I've had my service tech check continuity between the ECM and the TCM and everything seems fine. The service manual shows that the the speed sensor is wired through the FPC connector but I don't believe that would give me a speed sensor fault. The P0600 - AT communication error and P0325 - Knock sensor related that is present as soon as I reset the fault codes. My service tech is speculating that the TCM may be faulty but the car has no engine or transmission issues at all. The error seems like a wiring issue but I can't find it.

I have the same problem that u have but I dont that knonck sensor. I have the speed sensor P0500, 02 Sensor B1 P0130 and the A/T com line transmission sensor P0600....my problems is its keeps turning off on me while i drive slow or stop....Stressing out....Have u figure it out your car problems?

I have the same problem P0600, this link help me figure out the problem just follow the instruction. http://forums.maxima.org/4th-generation-maxima-1995-1999/76800-check-engine-light-diagnosis-if-trouble-lights-read-here-first.html

Ok guys lets see if I can help. I have a 97 maxima gxe that had similar issues. My very first price of advice would be to PROPERLY DIAGNOSIS the problem(s) and not simply throw parts at it hoping it will fix the issue. This also goes for people paying for diagnostics work, make sure you TRUST your mechanic and that he or she actually does do a proper diagnostics procedure. Checking all leads, and testing the part before replacing it. OK, so I too was getting the speed sensor code along with the O/D light blinking at random times and the cruise control would not work at random times. The very first thing I did was pull the ECU codes, sure enough there was the VSS code. Since the o/d light was blinking during the ACC light check, I knew my tranny was trying to tell me something. So I proceeded to pull the tranny computer codes. (There's a procedure, found in the FSM, to trip the transmission computer into a diagnostics mode. It's a simple procedure But it's rather lengthy, So I won't get into it here just do a search or look it up in the FSM. Anyway, The transmission computer Also held the VSS code. Knowing that a vehicle speed sensor rarely goes bad And because My speedometer is reading accurately, I figured it had to be in the wiring. So the first thing I did was check the leads for the vehicle speed sensor which are attached to the back of the gauge cluster with a few screws. I loosened then re-tightened the screws to ensure a good contact. I put everything back in clear the codes. Then after two key cycles I checked the codes again and nothing on both the transmission computer and ECU. If the code had showed back up then I would have used an ohmmeter to do further diagnostics. But it wasn't necessary. Its been almost 2 months now and the code has not come back. So all you guys with the maxima or similar platform and are getting the vehicle speed sensor code. Don't freak out and don't throw a bunch of parts at it. Diagnose a problem properly. At worst you would need a new gauge cluster assuming you tested the vehicle speed sensor and it teste good.

Service engine simply means "Get an oil change" It's set on a timer and comes on every so many miles. Clear your codes, half the time they're wrong anyway. 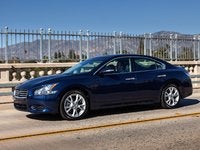