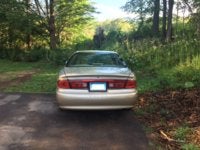 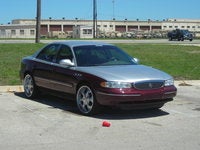 Are There Compatible Parts For A Century And Parkave?

93 Buick Century Goes Into Every Gear But First

While driving highway speeds I dropped to first gear in my automatic 93 Buick century 3.3 l and it felt like it was a neutral if I roll while I'm drive up to speed it will catch second and third an...

Compatible radiators for a Buick century 2003

Where Is The Thermostat In A 2000 Buick Century??

We just bought my daughter a 2000 Buick Century and the low coolant light comes on, and it overheats.....even when it has coolant. We want to replace the thermostat WHERE IS IT? Thanks!

No, they didn't name Buick Century after the average age of its drivers. The reference to 100 is a nod to the top speed the first Buicks supposedly achieved. But there's no denying that Buick vehicles have long been considered granny cars, with their conservative, unimaginative exterior styling housing a somewhat upscale, yet practical interior and less than thrilling performance. By the way, the average age of Buick owners is somewhere in the 60s.

Since the demise of the Skylark, the Century has become Buick's economy car. But this mid-size sedan first appeared back in the 1930s as a full-size car. Reintroduced in the late 70s, the rear-wheel drive Buick Century was offered as a sedan, coupe, or wagon with powerful V6 and V8 engines. In the 1980s it went to front-wheel drive and smaller I4 and V6 engines with little power or energy. It was a practical car, built to get you from point A to B. Its boxy lines screamed American car.
In 1997, the Buick Century was freshened up, with softer, rounder lines. It dropped the wagon and coupe, marketing itself as an affordable family car alternative to more upscale foreign sedans, though it didn't sacrifice Buick's reputation for comfort and luxury at an affordable price. For these reasons, it became the top-selling car in the Buick line once the entry-level Skylark disappeared.
The Century was a reliable, if unexciting sedan. Though it suffered from a small back seat and a cheap-looking plastic interior, it performed well, was fairly comfortable, and durable -- all things a first-time buyer or family on a budget are looking for in a starter car. As part of Buick's attempt to reinvent itself for a younger market, the Century was axed in 2005, to be replaced by the LaCrosse.