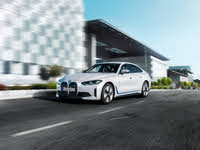 2022 (announced)
Read the CarGurus Preview
View i4 questions
BMW i8

I put my car in the BWM service center and they said there is 22% engine oil leakage, which they are suspecting there is a deformation of cylinder #1 in the engine (not from anything else). Have any...

There was a dealer who advised me that the price advertised on your site was not the cash price, the the cash price was over 2000 more. I advised the dealer that they were violating AMVIC and the C...

Malfunction Lights And No Power

my Bmw is stuck in nuetral and says parking brake malfunction and also says ignition malfunction and now the battery is completely dead i get no power no light no alarms no nothing unless it is jump...

Started in 1913 in Germany by Karl Rapp, BMW (Bavarian Motor Works) is one of the leading global car manufacturers. Its cars are synonymous with high-quality craftsmanship, superior performance, and excellent tactile response. Originally an aircraft engine manufacturer, BMW retains some of its connections to this root, including the white propeller against a blue sky embedded in its logo.

In 1919, BMW produced its first motorcycle engine, followed in 1923 by the production of the first full motorcycle. In 1927, BMW bought Dixi, a small car manufacturer, and it started producing its own cars in 1933.

BMW has stuck with its "Series" naming convention for decades, an impressive continuous standard. It has added letters to its numbered series to account for the Z roadsters and X SUVs.

The 1 Series was introduced in Europe only, and the associated cars are produced with standard rear-wheel drive. First offered in 2004, the 1 Series came to the U.S. market for the first time in 2008.

For a long time, the 3 Series was the smallest of the BMW Series. It's still known throughout the world as the entry-level car for BMW, and jokes abound about young executives purchasing their first 3 Series as a rite of passage. These small, powerful cars have been successful both in racing and on the road.

The 5 Series represents the midsize BMW and has been a frequent occurrence on the Car and Driver Ten Best list. The M5 can be found among the 5 Series, a very powerful machine.

The 7 Series carries BMW's full-size sedans and is the flagship for the automaker. BMW truly prides itself on its 7 Series models, and rightly so. Recent commercials in the United States show the newest of the line parking itself between stacks of crystal glasses - quite impressive.

The 8 Series seems to be one of BMW's few missteps. Originally produced in 1989, the 8 Series lasted only 10 years, with only 30,621 sold. These cars came with a six-figure pricetag, which many did not feel was worth paying for the heavy automobile.

The Z series was first introduced in the late '80s, but reached ultimate popularity after James Bond drove one in "Golden Eye." These two-seat roadsters remained popular for years after the film.

BMW's entry into the SUV market is represented by the X5 (introduced in 2000) and the X3 (introduced in 2004). These cars are meant to have the commanding view of an SUV while giving the agile ride of a BMW sedan.