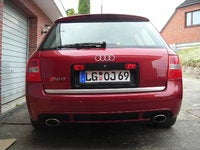 Searching for Audi RS6 using 500 miles as an outside distance from 01983, Cargurus shows a total of 4 cars. One of which is located in Ansonia, CT · 142 mi away. Using the same Make and model criter...

Hi everyone! I have a strange question.. So I have been searching for a video that I have seen about 5 years ago. The video was about the AUDI RS6 Avant (I think it was RS6). So in the beginning of ...

I want to purchase a 2003 RS6 Audi and install a 6sp manual transmission instead of the stock 5sp automatic.Can I use the 6sp transmission to The A 2.7T? Thanks, Rich

The Audi RS6 was the fastest car Audi delivered in 2003. Based on an A6 platform, its twin-turbo 4.2-liter V8 engine hit 450-hp and achieved 415-lb-ft of torque at extremely low RPMs. Acceleration was immediate, speed was excessive, the driving experience thrilling. Yet on the outside, it hid all this power under the guise of a luxury mid-sized family sedan.

Produced in collaboration with Quattro GmbH, an Audi racing subsidiary, the RS6 exhibited influences from the RS8 racer that won Le Mans three times. The wide-ranging torque action made it a more responsive car than the A6 and virtually eliminated turbo lag. The RS6 was the first car to feature the Dynamic Ride Control suspension, which was a hydraulic system designed to decrease body roll during tight cornering and turning. This sports-car engineering, combined with the already capable quattro meant the RS6 might look like a commuter car, but achieved optimal performance on the highways and back roads.

The RS6 came with all the standard options found in the luxurious A6 sedan, though the leather seats were more supportive. A lower ride height and stronger shocks produced firmer handling. Understated cosmetic touches, such as subtle badging, diamond-patterned grille, dual pipes, and a subdued rear spoiler distinguished it from its more staid sister. Its main attraction was the powertrain combo and terrific performance at high speeds. Drivers warn to watch in your rearview mirror for cops, because the ride is so smooth you won't realize how fast you're going. The biggest complaints about the RS6 were its price and fuel economy. Because of the quattro and standard features, the RS6 was quite heavy and only got about 15 mpg city.

A new RS6 for 2007 is in development and will most likely carry the same 5.2-liter V10 engine as the S6, but with twin turbos. Its estimated horsepower is somewhere around 520-hp. Hold onto your hats. Literally.