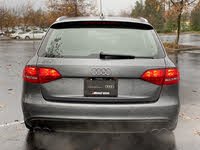 How Do I Find Code For A4 Blaupunct NAVIGATION PLUS As Code Is Missing . Th...

My Audi Will Start But It's Idling Weird.

What is this hose corner piece on my 03 Audi A4 Avant Quattro 1.8t awd wagon there's two hoses at the top of engine on left side the bottom hose had this plastic 90° corner connector break off and ...

Where Is My Oil Leak Coming From?

I am wondering what this line is called underneath my 2007 Audi A4 Quattro on the passenger side. I recently got my oil changed (less than 400 miles ago) and my minimum oil line came back on (was ...

The Audi A4 is a mid-size luxury sedan that occupies the lower rung of the A lineup (in addition to the A6 and A8). Essentially Audi's entry-level car, the A4 introduced its Avant wagon in 1998, as an alternative to the growing popularity of gas-guzzling SUVs. The Avant wagon featured quattro technology, but with more car-like handling, without skimping on cargo room.

The original engines were a turbocharged 2.0-liter, 4-cylinder at 150-hp and a 3.2-liter V6 at 172-hp. The engines have remained the same over the years, while horsepower rose to 200 and 255 respectively with the second generation refresh in 2002. This new generation Avant also featured a lighter-weight aluminum suspension, for even better handling, fuel economy, and sporty feel. Interior space was also increased somewhat, but the A4 is the smallest of the A-class segment, and therefore rear legroom continues to be limited.

Aside from quattro performance, Audi is also known for its comfortable and upscale cabins, and the A4 Avant is a good combination of luxury and utilitarian convenience. Power features, leather seats, a sunroof, MP3 compatibility, wood accents, and dual-zone climate control are some of the long list of standard features. Plenty of option packages add on performanc-oriented equipment, safety features such as rear parking sensors, and added comfort in the form of heated seats. Safety is always a primary focus of Audi, and the A4 Avant is fully equipped with airbags, ABS brakes, and traction and stability control.

Though its functionality resembles the station wagons of yore, the A4 Avant is more a blend of car and SUV. The surefooted quattro makes it ideal in rough climates, while the smooth and quiet ride are equally at home in city commutes. Though smaller than some other wagons in terms of rear passenger room, most drivers generally love its style, comfort, and reliability.