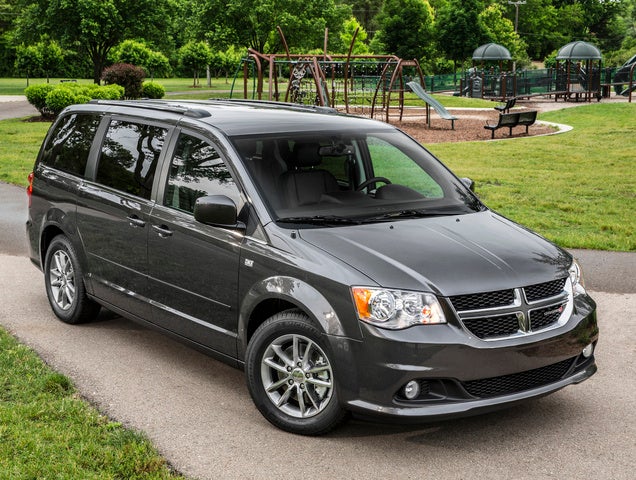 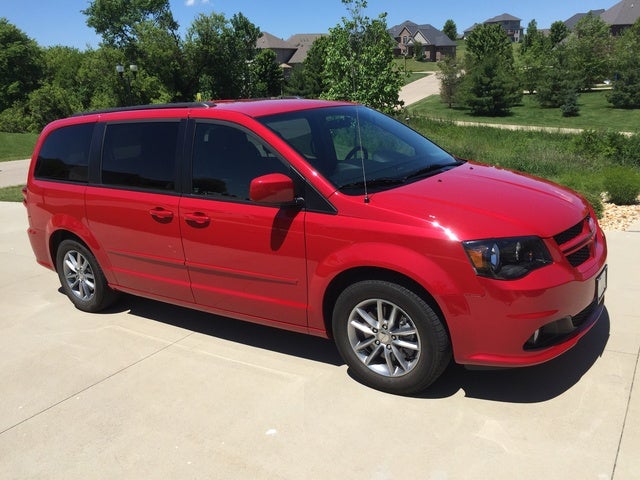 The “Chosen One” continues for 2014 without its second-in-command in preparation for a 2015 redesign. Dodge's Grand Caravan will be Chrysler's only minivan once its Chrysler Town & Country stablemate gets redesigned into a crossover for 2015, especially since Volkswagen's Routan spinoff isn't expected to return, given that maker's expansion into its own 7- and 8-seaters. As a result, Dodge dropped the Grand Caravan's second-from-top Crew trim, moved those features to the top-shelf R/T and otherwise left it exactly the same between 2013 and '14, excepting one paint color.

Now offered in American Value Package (AVP), SE, SXT and R/T trims only, the Grand Caravan stands out primarily for sharing Stow 'n Go seating and an able powertrain with its T&C brother. The lone 283-hp and 260-lb-ft/torque 3.6-liter V6 engine mates to a 6-speed automatic transmission that sends all that power to the front wheels while getting 17 mpg city/25 highway, which isn't terribly efficient but is about average.

The exact same “it's okay” can be said of its driving dynamics, comfort, interior materials and just about every other detail, most especially if you buy in at the AVP base. Having 33 cubic feet available behind the third row is pretty impressive, but again the Grand Caravan's 143.8 cubic feet of cargo space is merely competitive. The T&C saves the day here by going upscale with a leather interior and the works for features. The Grand Caravan, however, is more the little brother if you think of it in terms of price and feature content, so the upholstery is cloth, the seats are not as cushy, and you'll have to opt all the way up to the R/T for the same tri-zone automatic climate control included standard in every T&C, just as one example.

However, at least the busy ride and engine noise the GC got from its genetics are right at home in this budget people-hauler. Drivers also mention the transmission in previous models may have been poorly programmed for handling highway speeds, and there's no mention otherwise whether this has been addressed. At least some drivers report better-than-advertised fuel economy.

All that said, nobody has any clue what the next Grand Caravan will look like or use for power. So far it's been speculated that the new Town & Country will share a platform with the redesigned Grand Caravan, but what platform that may be is a total mystery. All we know is that Chrysler is moving upscale, while Dodge is moving toward heavy-duty applications. Given that we can only imagine more of the same so-so budget features and peppy go-go engines.

For now standard features for the Grand Caravan AVP base include heated mirrors, power front windows, dual-zone air conditioning, a conversation mirror and a minimalist 4-speaker stereo system with a CD player and an auxiliary jack. Stow 'n Go seating starts at the SE trim for just the second row, and powered sliding doors and a liftgate are not standard until the SXT. Most features available to higher trims are available as options, but there are several options exclusive to specific trims.

What's your take on the 2014 Dodge Grand Caravan?

swissmac Actually I like my 2014 Dodge Grand Caravan R/T very much, but the sound system (according to the ad with 500W and subwoofer) is very very very weak. Is there anyone with same experience? Anything that can be improved?

emtff251 I love my 2014 Caravan. The only problem I had was the transmission disintegrated. Dodge however stood behind their warranty and I'm back on the road. We have no idea what caused the transmission problem but it did happen unexpectedly, without any warning noises or shifting problems. Otherwise, I absolutely love my Dodge.

Users ranked 2014 Dodge Grand Caravan against other cars which they drove/owned. Each ranking was based on 9 categories. Here is the summary of top rankings.

Have you driven a 2014 Dodge Grand Caravan?
Rank This Car

Red Warning Light On Right Side

red warning on the right side of the instrument panel is on?

The Power Windows Will Not Functioning Properly After Repair

I just replaced the passenger side window regulator in my 2014 dodge grand caravan. Everything went smoothly until I tested it. The window rolls up than automatically rolls itself down. Or it will ...

Car keeps tripping cylinder misfire after having tune up, plugs, wires & coil replace. Mechanic did compression test which came back fine as well as switched out fuel injector to make sure that wa...

How Do I Fix The Spring In The Rear Drawer Storage?

The spring fell off the rear storage drawer and now it won't stay closed. Any idea on how to fix it?