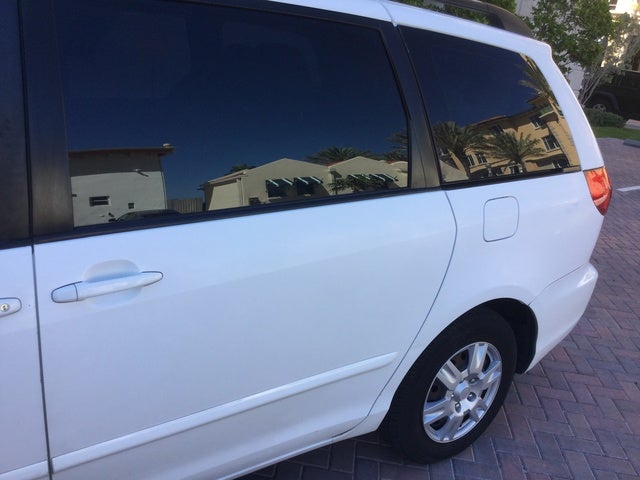 Aside from from its reliability, quality, and high resale value, the 2009 Toyota Sienna offers a spacious and flexible cabin, expansive storage capability, a high-end and comfortable interior, and the only all-wheel-drive system available on any minivan.

Poor fuel economy remains the hallmark of most minivans, including the '09 Sienna, and in head-on comparisons with the Odyssey, Toyota's minivan disappoints with less refined handling dynamics.

Hey, it's a minivan, so the 2009 Sienna won't necessarily win any styling points, but it does give families a safe, secure, and solid people mover with plenty of configurable space for passengers and cargo. A good set of standard features and upscale interior provide all-around comfort. Although driving dynamics in the large van can be somewhat unwieldy, a strong powerplant and available all-wheel drive lend the Sienna a confident stance on the road.

Blending Toyota's quality reputation, a family-size spacious interior, and the most powerful engine in a minivan, the popular Toyota Sienna returns relatively unchanged for 2009 as it prepares for a major overhaul for the 2010 model year. For now, the midrange LE trim gets a new option package that bundles Bluetooth and a rear DVD player, while the XLE joins the Limited by offering front and rear parking assist as part of its standard equipment.

The third best selling minivan in the U.S., the 2009 Sienna comes in CE, LE, XLE, and Limited trims. All are available in either front-wheel or all-wheel drive configurations, except for the CE, which comes only in front-wheel drive. The AWD system lacks low-range gearing and off-road capability, but does provide extra traction in slippery conditions. It comes packaged with larger 17-inch wheels with run-flat tires, compared to the 16-inch wheels on front-wheel-drive trims. The Sienna remains the only minivan to offer AWD.

The 2009 Sienna earns high marks for a safe and comfortable ride and utilitarian seating flexibility, both important requirements when seeking a family van. It also boasts a long list of standard features often found only in pricier vehicles, although a rigid way of bundling options can force owners into buying a higher-end and costlier trim just to get certain features. With Toyota's reputation for reliability and quality engineering, the Sienna represents a solid choice for families needing versatility, comfort, and security. 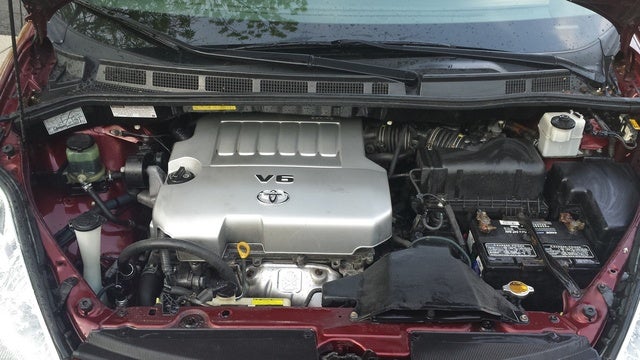 One engine powers all three Sienna trims – a muscular 24-valve, 3.5-liter DOHC V6, paired with a five-speed automatic transmission. Together they deliver 266 hp and 245 lb-ft of torque at 4,700 RPM, making the '09 Sienna one of the most powerful minivans on the road. AWD models have been clocked doing 0-60 in 8 seconds. Variable valve timing improves fuel efficiency, which averages 19/25 mpg with front-wheel drive and 18/23 with all-wheel drive. When properly equipped, the Sienna can tow up to 3,500 pounds.

Test drives find the V6 engine plenty powerful to move this 5,700-pound minivan around town, with confident and responsive acceleration on the highway. The automatic transmission behaves quickly and smoothly, and the entire powerplant emits little noise and whine, even at higher speeds. Fuel economy gets mixed reviews, although most critics and owners find it more than acceptable for a large minivan.

Handling remains competent in the '09 Sienna, though most critics agree that it falls behind the more refined dynamics of the Honda Odyssey. Despite its size, the minivan exhibits a small turning circle of 36.8 feet, although its 200 inches of length do hamper maneuverability in close quarters, and its large size does cause significant body lean when cornering.

The Sienna rides on an independent Macpherson strut front and torsion beam rear suspension, which manages to absorb most bumps in the road without degrading ride quality. The result is a smooth and even ride that feels more like a family sedan than a large van. The standard 16-inch wheels transmit little noise. Critics find their road grip decent, but not outstanding. The larger 17-inch run-flat tires are comparable. Speed-sensitive power steering adjusts the feel of the wheel according to driving speed, but most reviewers call it vague and numb, lacking any direct driver feedback.

As the only minivan on the market to offer an AWD option, the Sienna performs well on snow, ice, and slippery surfaces. The automatic system lacks low-range gearing, however, and should not be used for off-road driving. AWD-equipped trims use run-flat tires, eliminating the need for a spare, but some owners report that these tires don't seem to last long.

Nothing if not family-friendly, the 2009 Sienna comes with ten cupholders and plenty of storage compartments. Three rows of seats include reclining first- and second-row captain's chairs and a third-row bench, for up to seven passengers in the XLE and Limited trims, while the base CE and midrange LE feature a second-row bench that expands capacity to eight. The captain's chairs in the higher trims can be replaced with the bench as an option. Both first and second rows enjoy plenty of legroom, with 43 inches up front and nearly 40 in the second row. Third-row passengers aren't so lucky, and kids will be more comfortable than adults back here. Headroom throughout measures 40 inches and above, easily accommodating 6-footers.

Both second and third rows fold, with the 60/40 third row folding into the floor. Disappointing to some owners, the 40/20/40 second-row bench does not fold into the floor, but the captain's chairs can be removed, although some reviewers report the process is cumbersome. A power-folding option for the back seat is available, but only for the XLE and Limited. The second row also moves fore and aft for a wide and easy entry to the back row. In the bench setup, the middle section slides 13 inches forward for quick access to a child seat.

Test drivers report comfortable and plush seats in all rows. Drivers get both tilt and telescopic settings for the steering wheel that adjust to all shapes and sizes. LE, XLE, and Limited trims also feature wheel-mounted cruise and audio controls. Gauges and buttons are clear and easy to read, but some critics find a few just out of comfortable reach, and the climate control knobs in the higher-end trims become illegible in direct sunlight.

Cargo capacity starts at 43.6 cubic feet and expands to a cavernous 149. All trims feature dual sliding doors for easy entry, with power doors and a power liftgate standard on the XLE and Limited. All trims but the CE come with a standard roof rack and a fold-flat front passenger seat to accommodate longer objects, such as long pieces of plywood. The cabin itself features plenty of storage compartments, door pockets, and bag hooks.

For its price, the '09 Sienna gives families plenty of features to occupy their time. Standard equipment on the base CE includes power locks and mirrors, a 6-speaker CD/MP3 player with MP3 input jack, remote entry, and 6- and 4-way power front seats. The LE adds power windows and heated mirrors, wheel-mounted cruise and audio controls, a 6-CD changer, and privacy glass. The XLE boosts the power driver's seat to 8 settings and includes a trip computer, power-sliding doors and tailgate, wood accents, and leather trim for the steering wheel and shifter. Going all out, and sometimes called the “Lexus of minivans,” the high-end Limited adds a sunroof, memory settings, Bluetooth, a 10-speaker JBL sound system, leather upholstery, and heated seats. Most of these features sit on the options list for the other trims, but are packaged in different bundles according to region. Other options include a navigation system and a rear DVD player.

Rear parking sensors are optional for the CE and LE, but both the XLE and Limited get front and rear park assist as part of the standard equipment. Noticeably absent on the CE and LE are automatic headlights, which can be purchased as an extra along with xenon HID lamps. A rearview camera comes bundled with the navigation system and helps mitigate the impact of thick C pillars and headrests. Another useful option, adaptive cruise control, maintains a consistent distance between the Sienna and the car in front of it on the road.

Taking its family functionality seriously, the 2009 Sienna earns top marks from owners for its spacious cabin and cargo capacity, huge amount of interior storage, and Lexus-like luxury comfort. Drivers say that it rides more like a car than a van, with a smooth and quiet engine and plenty of visibility. The V6's power proves just right for confident highway and city driving, with many owners reporting surprisingly good fuel economy into the mid-20s. The AWD option proves competent in snowy and icy climates, and most owners cite Toyota's reputation for build quality and durability as another determining factor in their purchase.

Many drivers report various mechanical and electrical problems with their '09 Sienna, particularly with the power-sliding doors. No one seems to be a fan of the run-flat tires, which one owner says exhibit early wear and tear. Interior rattles and squeaks seem to be commonplace. Some reviews express disappointment that the pricey bundled options are not offered as stand-alones, along with the fact that certain options are not available for all trims.

No comments yet from CarGurus owners, but reviews of virtually identical Sienna models in the past reveal an appreciation for the minivan's expansive and configurable interior, quiet ride, tight turning radius, and smooth handling. Owners also like that the third row folds flat into the floor, but are disappointed this feature doesn't exist for the second row. The sound system earns very high marks. Most drivers complain about the large van's fuel efficiency and the run-flat tires. While handling earns positive reviews, several drivers claim it's not as good as the Odyssey.

Users ranked 2009 Toyota Sienna against other cars which they drove/owned. Each ranking was based on 9 categories. Here is the summary of top rankings.

Have you driven a 2009 Toyota Sienna?
Rank This Car

Brake Pedal Goes To The Floor And Van Does Not Stop After Replacing Master ...

pedal was soft and would go to the floor unless it was pumped. After replacing master cylinder and bleeding the brake lines, pedal goes to the floor and brakes are not applied.

What Is The Cost Of New A/C?

my 2009 sienna LE needs A/C conversion to current standards. what does that cost?

We Get A Lot Of Snow - Is AWD That Much Safer Than FWD+TCS Now?

With two kids (soon) we were thinking of a minivan, but we get a lot of snow and the only AWD minivan out there is the Sienna - it's relatively expensive (no corporate discount for me) and things like...

Tires Wearing Off Too Frequently.

I have a certified Toyota Sienna and the tires seem to start showing sign of wearing off in 6 months, as if it has allignment issues or something. The car does not pull to one side or anything. The ...

What’s Wrong With My Car

My heat went out in the back of my 2009 Toyota Sianna . It works fine in the front but not in the back at all