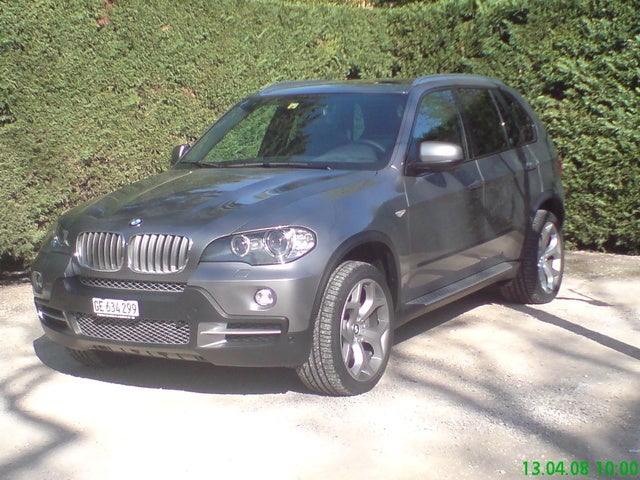 BMW's X5 "Sport Activity Vehicle" entered the market in the 2000 model year. The second generation arrived in 2007. Based on customer feedback and engineering analysis, the second-gen m... Read More
BMW's X5 "Sport Activity Vehicle" entered the market in the 2000 model year. The second generation arrived in 2007. Based on customer feedback and engineering analysis, the second-gen model grew 7.4 inches in length (with 4.5 inches added to the wheelbase) and 2.4 inches in width. The 2008 model has only minor changes.
The X5 4.8i is equipped with a 4.8-liter V8 that produces 350 hp. The engine features BMW's variable cam (double VANOS) and variable valve timing (VALVETRONIC) and is backed by BMW's excellent six-speed automatic Steptronic transmission. Reviewers like it so much they criticized BMW for not offering paddle shifters! According to BMW, the V8 does the 0-60 jump in 6.4 seconds, while top speed is governed to 130 mph. Passing the gas pump, however, is not so easy. Consumer Guide Automotive averaged 13.9-14.8 mpg in mixed city/highway driving.
With the second generation, the X5's front suspension was redesigned. While the ride is smoother, reviewers find it a bit firm for most American tastes. Reviewers rave about the handling, though, comparing the X5 to a sports sedan in grip, steering feel, and aggressiveness. Some even suggest ordering the optional sports suspension to get the full "BMW experience."
The full-time xDrive all-wheel-drive system has been improved since the first generation. It provides a 60% rear-wheel torque bias under normal operating conditions, but can vary power distribution between axles and even send all power to a single wheel, if necessary. The system is also integrated with the yaw sensors in the standard Dynamic Stability Control system and can thereby counteract over- and understeer in corners.
The interior receives high praise from reviewers as "a perfect mix between luxury and sport." Leather is standard, and the front seats are very supportive. Even the second row has good leg- and headroom. Interior materials are a good mix of durability and luxury and exhibit BMW's traditional attention to fit and finish. As expected, no one had a favorable comment on BMW's iDrive system, which controls climate and entertainment functions.
One of the main reasons for the increase in the size of the second-gen X5 was the addition of an optional third-row seat. This raises seating capacity from five to seven. However, every reviewer was dissatisfied with the head- and legroom provided for the third row. With the third-row seat up, there is 7.1 cubic feet of cargo space, or enough room for "a row of grocery bags." With that seat folded flat, the X5 has 18.5 cubic feet, or room for "a week's worth of luggage for a family of four." And with both rear rows folded flat, it's got 61.8 cubic feet, or "enough to take a kid, and all of their stuff, to college."
The X5 receives the highest safety ratings and comes standard with Dynamic Stability Control, which incorporates rollover sensors, four-wheel disc antilock brakes, electronic brake assist, all-wheel drive, hill descent control, a tire-pressure monitor, and front-seat active head restraints. In the cabin there are dual front airbags, front side airbags, and front- and second-row curtain side airbags with rollover deployment.
Collapse