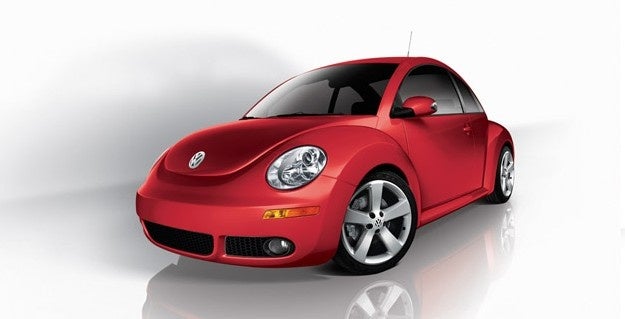 As the New Beetle from Volkswagen celebrates its 10th anniversary (since its reintroduction in 1998, that is), the automaker apparently plans a rather quiet celebration, since not much is new for the 2007 model year. The Beetle still retains its contemporary/retro styling, which has been tweaked over the past decade but never radically altered. And power is still provided by a 2.5-liter, 150-hp gas engine, introduced in 2006, which is linked to either a five-speed manual transmission or an optional six-speed automatic with the Tiptronic shift control feature.

A few years ago, VW introduced MP3 playback capabilities into the Beetle's AM/FM/CD audio system, and for 2007 offers another innovation. For a limited time through December 2006, the automaker is giving away a First Act guitar with the sale of any Beetle (or other VW model). The guitar plugs right into the Beetle and plays through the car's stereo system.

What's your take on the 2007 Volkswagen Beetle?

Have you driven a 2007 Volkswagen Beetle?
Rank This Car

Can You Tell Me My Problem

I have a 2007 VW Beetle Cabriolet and my passenger door will not unlock with the key fob or buttons inside the car. It eventually opens if i turn the engine off, take the key out and repeatedly press ...

GuruGG2JN asked a 2007 Volkswagen Beetle 2.5L Maintenance & Repair question about a year ago

How To Fix A Oil Leak

I changed my 2007 BW beetle oil and oil filter a week ago and now I have a oil leak. What should I do?

Guru8FD1R asked a 2007 Volkswagen Beetle 2.5L Convertible Car Selling & Trading In question about a year ago

HOW DOES THE PAYMENT WORK THRU CARGURUS

How Much For A Spark Plug Change

did call you you didnt back to me