Fans of “The Dukes of Hazzard” and “Bullitt” have fond memories of the Dodge Chargers of the late 1960s. But those long, low, and lean coupes had two doors, not the four found on the 2007 Dodge Charger. 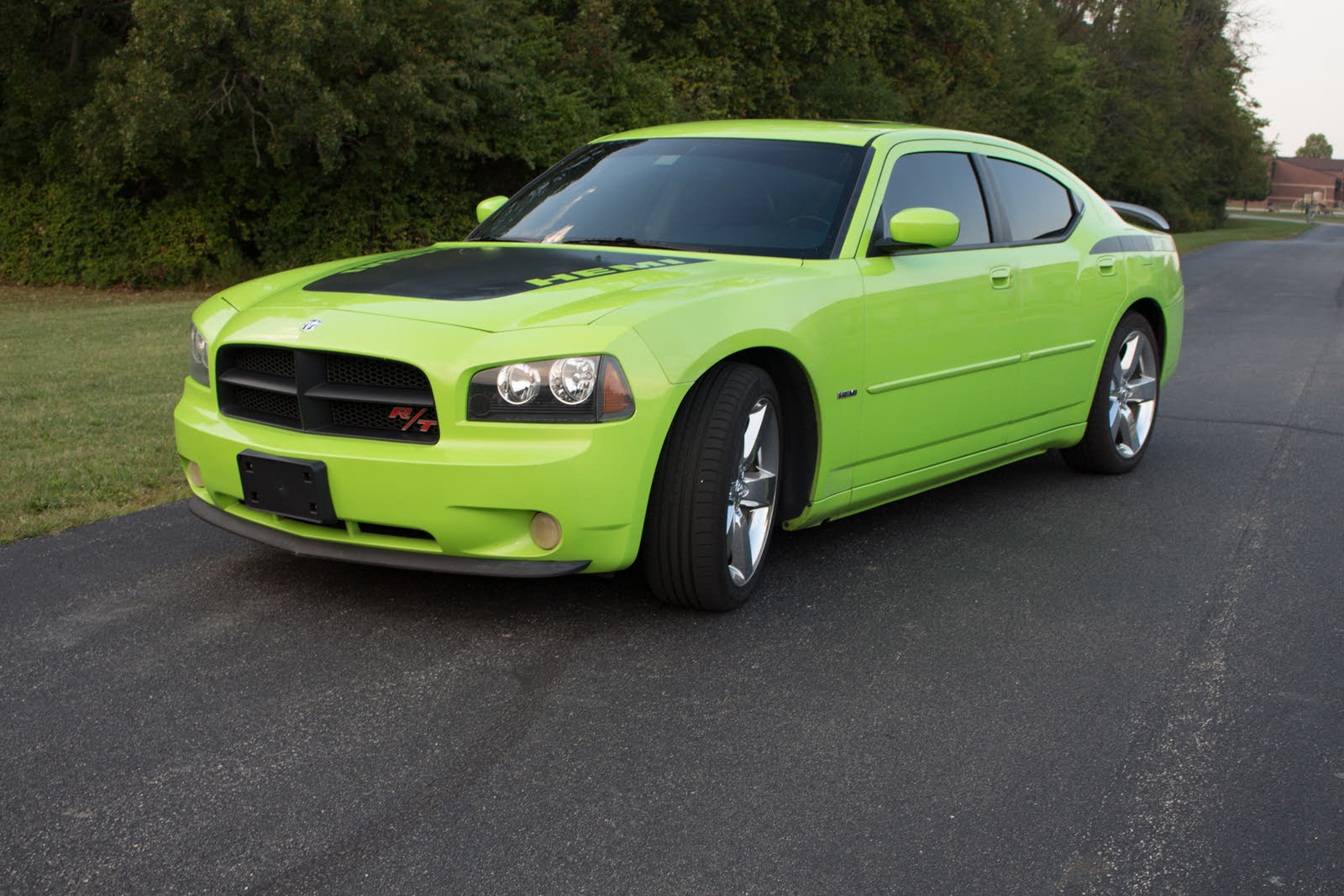 One year after Dodge reintroduced the legendary Charger nameplate on a family-sized 4-door sedan, the instantly popular car continues to line Chrysler’s coffers. Four trim levels are available: SE, SXT R/T, and SRT8. And if you need more cargo space than the 16.2 cubic-foot trunk can provide, be sure to check out the Dodge Magnum, which is the same car with a wagon body style and different front styling.

For 2007, a lower-priced version of the Charger SE equipped with a smaller 2.7-liter V6 engine joins the lineup. All-wheel drive (AWD) is a new option for all but the high-performance, rear-wheel-drive (RWD) SRT8 version, and a new rear-seat entertainment system with a DVD player debuts. 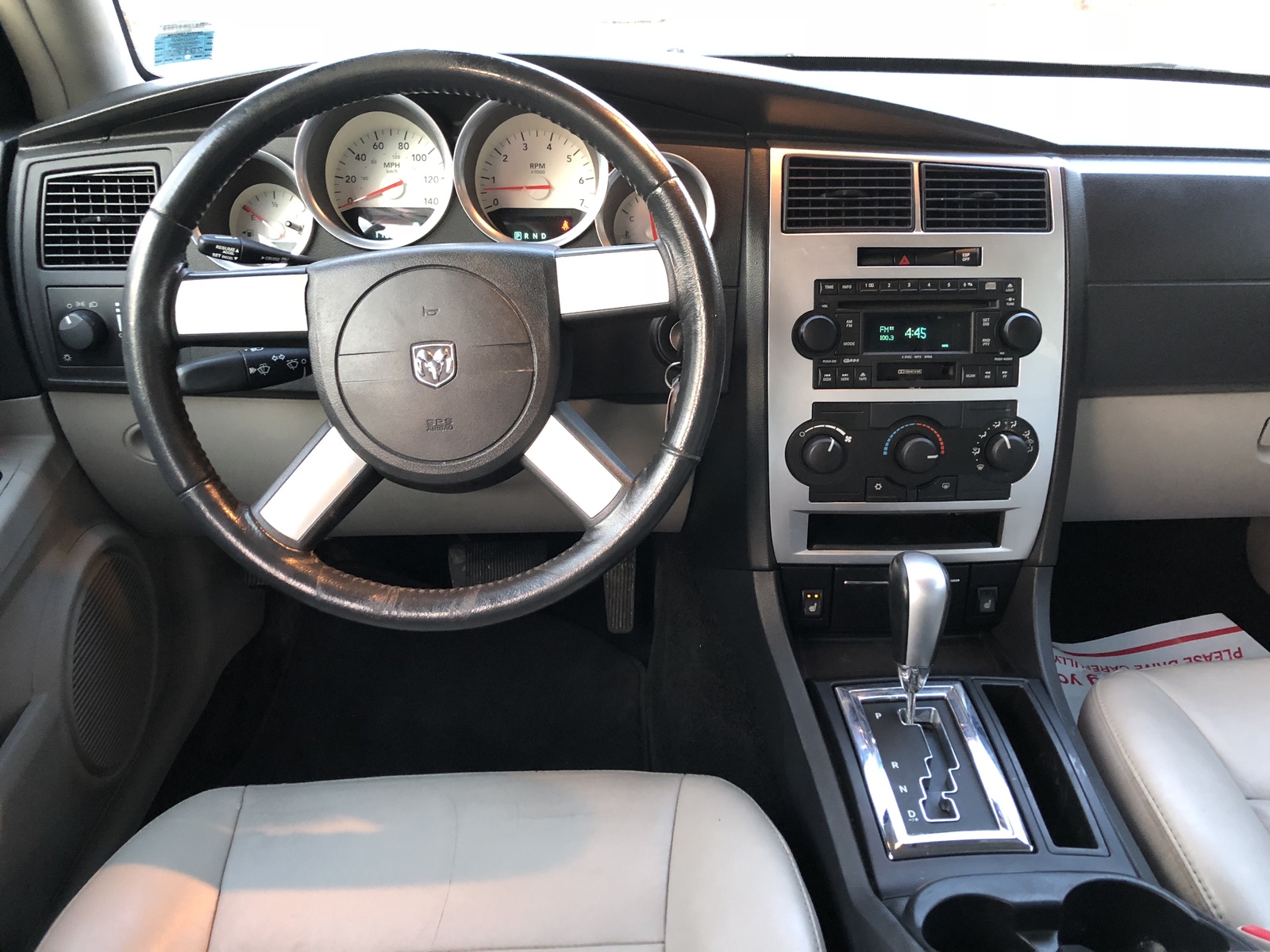 Angry, beady headlights flank a bold crosshair grille to give the blunt-faced 2007 Charger an appropriately menacing look. Choose the Charger SRT8, and the car gets a hood scoop and chunky 5-spoke wheels. Sharply kinked rear windows and a fast roofline do their best to make this sedan look more like the coupe from which its name is derived. Around back... well, Dodge’s imagination clearly had run its course.

An oversized 4-spoke steering wheel and an imposing dashboard greet the driver and front passenger. Aside from four recessed gauges, the Charger’s cabin is plainly outfitted. There’s plenty of hard plastic, too, which helps to make the car more affordable but also gives it an inexpensive look and feel. 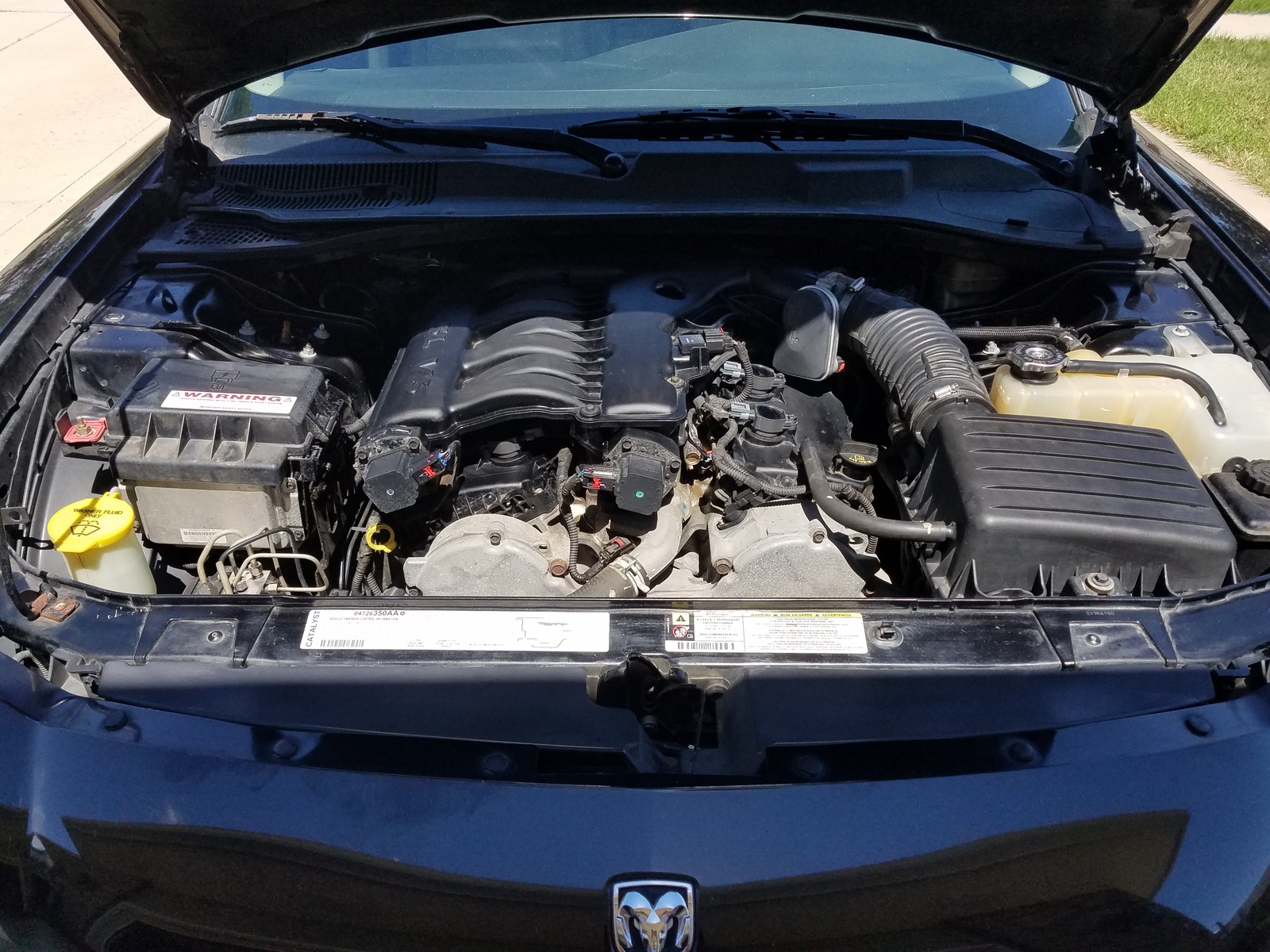 For 2007, a new 190-horsepower 2.7-liter V6 engine debuts, but you should avoid this power plant. The 250-hp 3.5-liter V6 is far more satisfying, delivering a good blend of acceleration and efficiency. Of course, nothing beats the rumble of a Hemi V8, and the Charger’s 340-hp 5.7-liter is exceptionally good. For maximum acceleration and volume, though, get the SRT8 for its 6.1-liter V8 making 425 hp.

All but the base 2.7-liter V6 has a 5-speed automatic transmission. The cheaper engine also gets a cheaper 4-speed automatic. RWD is standard, with AWD an option on every Charger except for the SRT8.

Based on a platform derived from the previous-generation Mercedes-Benz E-Class (W210), the Charger is remarkably sophisticated in terms of its ride and handling. It feels like a solid, responsive, classic German sedan, and with either of the V8 engines, it sounds like a classic American muscle car. Comfortable for all-day blasts down the Interstate, nimble enough to handle heavy traffic in urban areas, and the epitome of cool in the school drop-off lane, the 2007 Dodge Charger is one of the most compelling cars in its class. 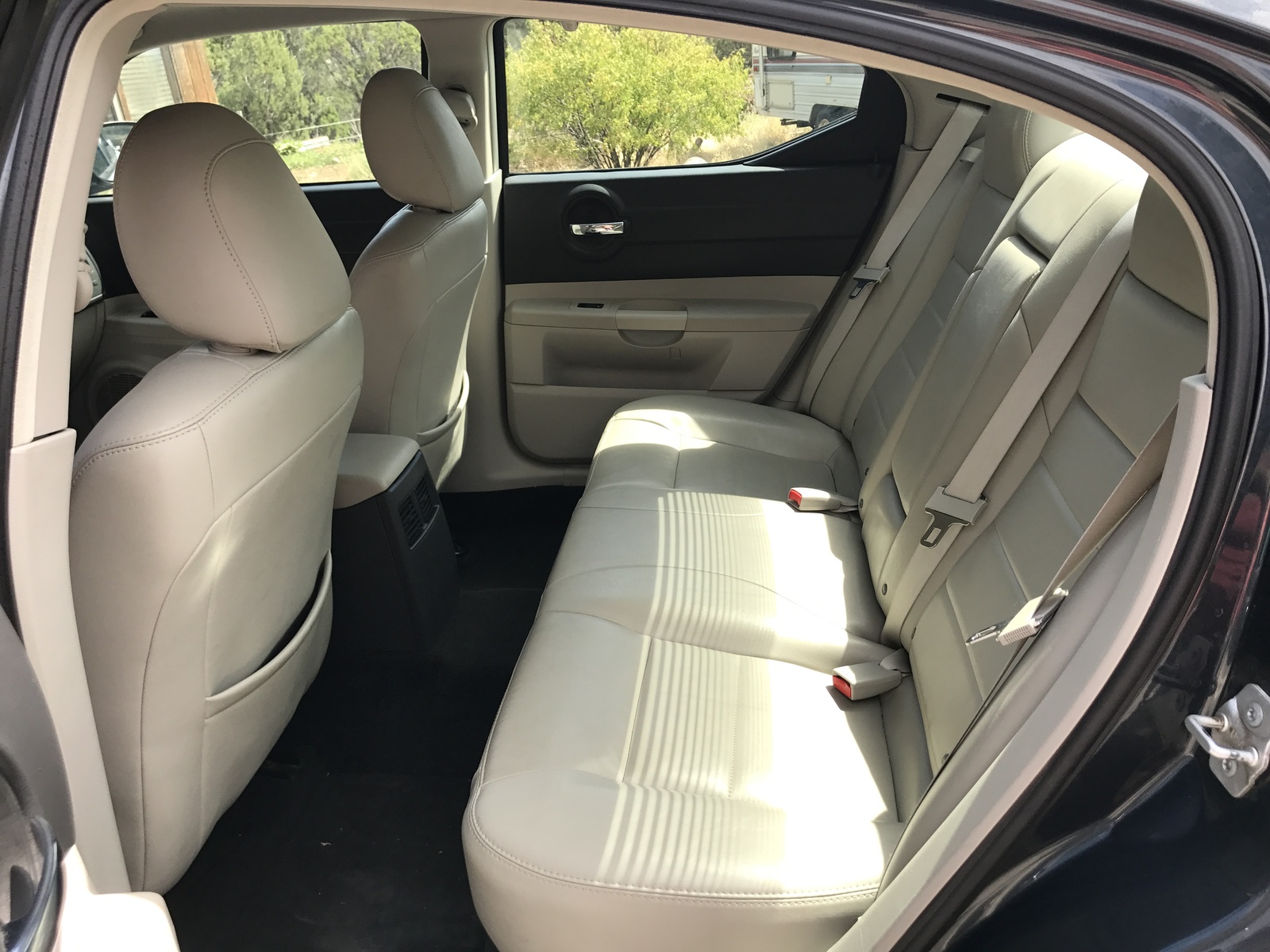 A full-size sedan, the Dodge Charger carries four adults in comfort, or five when necessary. The front seats are especially roomy, and you sit up tall in the saddle looking over the long hood.

To make the car accessible to the broadest possible audience, the Charger SE is pretty basic, though you can option one up if you have the extra money in the budget.

The Charger R/T adds leather seats, power-adjustable pedals, and the all-important Hemi V8 engine as standard equipment. Similar equipment upgrades are offered for the R/T, along with sport-tuned steering, suspension, and exhaust; a set of 20-inch wheels; and a cool Daytona Package with special trim, colors, and exterior decals.

Performance is the point of the Charger SRT8. In addition to its 6.1-liter V8, it’s got 20-inch forged aluminum wheels, a performance suspension, upgraded brakes, and more. Inside, suede-trimmed performance seats are standard. A Super Bee Package equips the Charger SRT8 with a retro yellow-and-black color scheme. 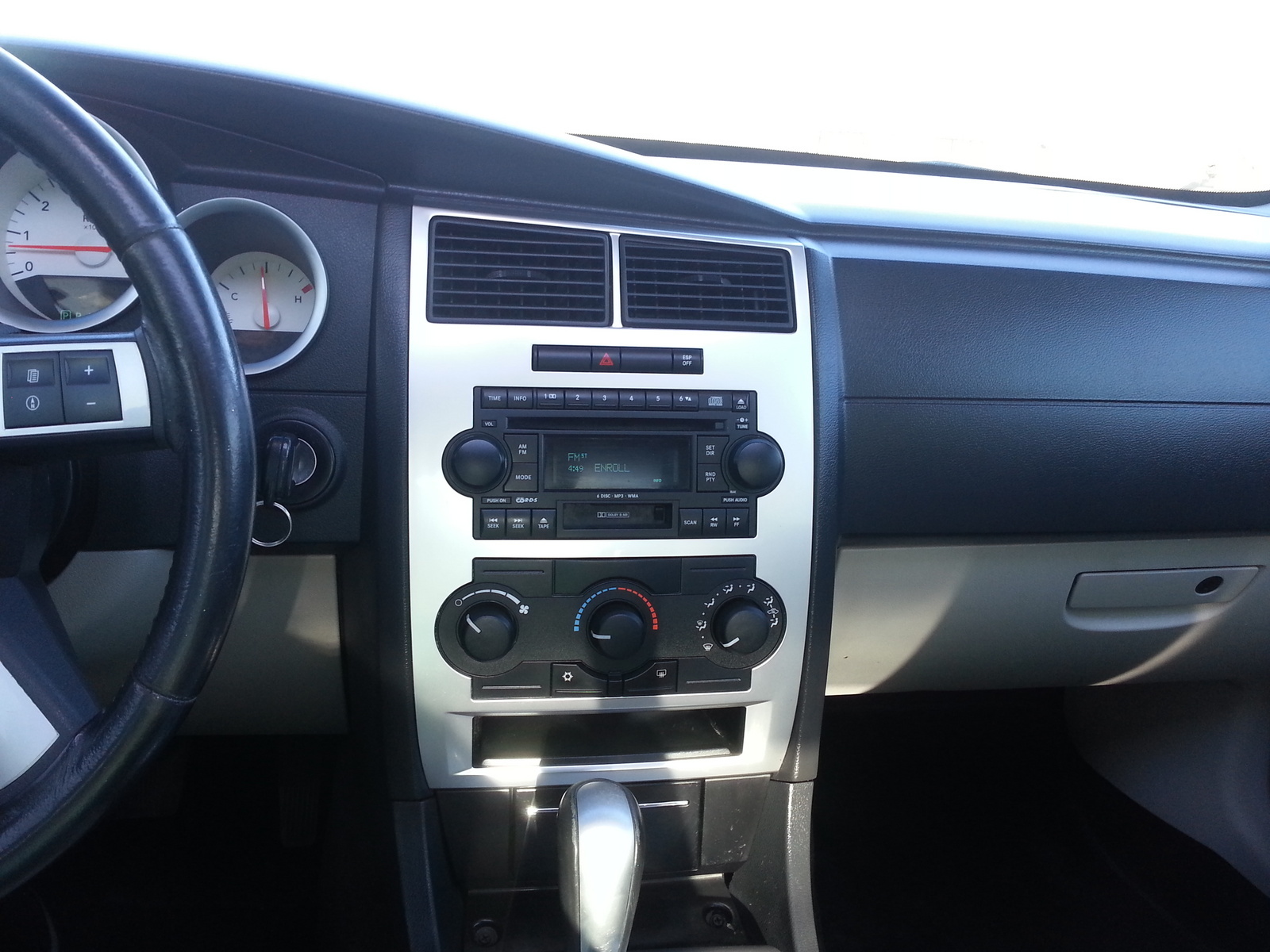 The Charger’s standard stereo has a CD/MP3 player and includes large knobs and buttons and is quite easy to use. Satellite radio is standard with R/T trim, and versions of the car with navigation get a display screen and smaller knobs and buttons that can be hard to see and use. The available premium sound system is by Boston Acoustics.

This year, Dodge offers a DVD-based rear-seat entertainment system for the Charger. Evidently, lots of parents find the roomy car and its big trunk to be perfect for family duty, prompting Dodge to add the new option. 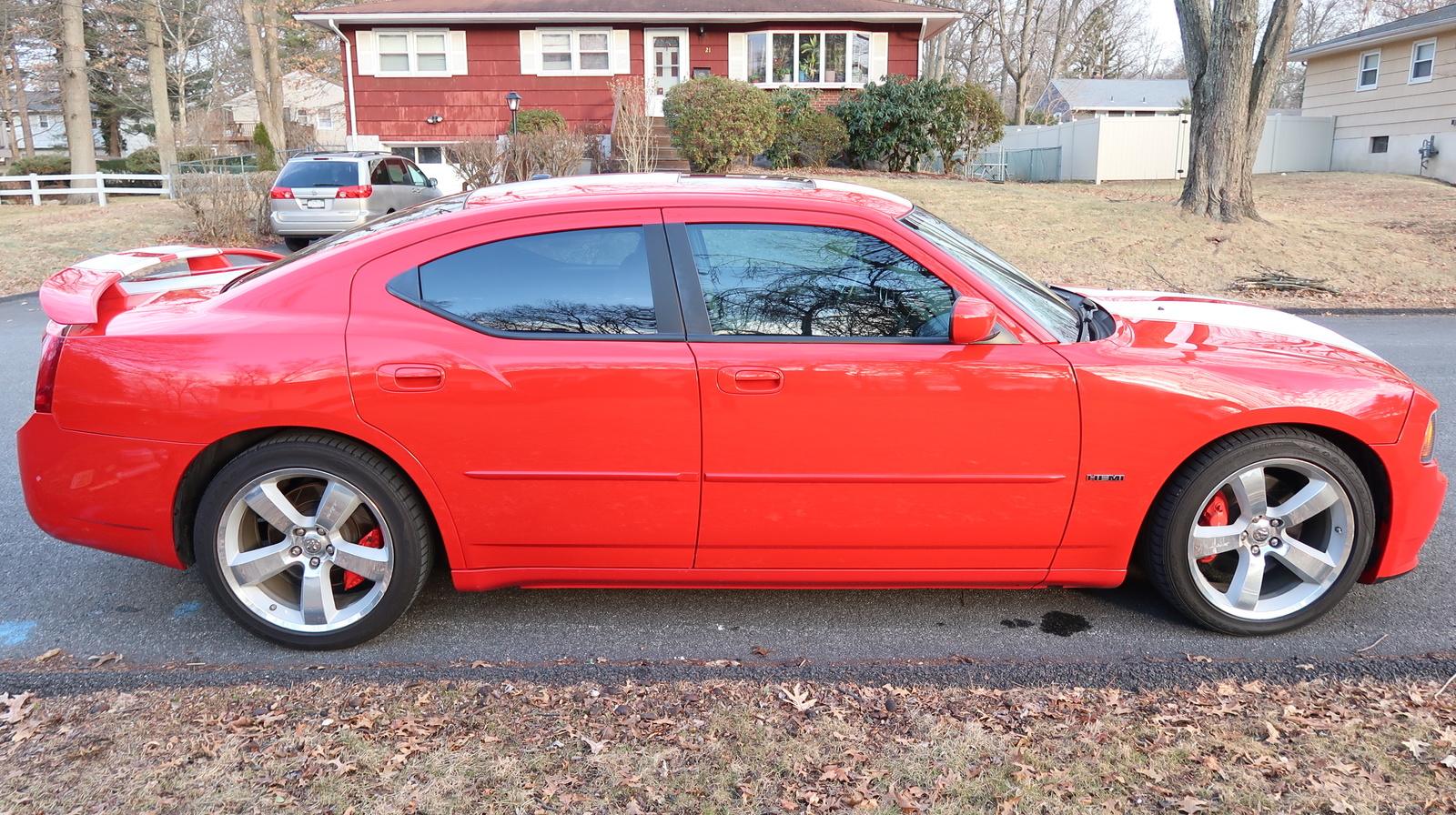 While the Charger is appealing as a family hauler, it falls short when it comes to safety. Sure, antilock brakes and stability control are aboard to help keep the car under control, but otherwise you’re on your own unless you opt for the side-impact airbags—and this is a car that tempts you to drive it like you stole it.

Should a crash occur, the Charger doesn’t do a good job of protecting its occupants. The Insurance Institute for Highway Safety (IIHS) says it gets a Good rating for moderate-overlap frontal-impact protection, but side protection without the airbags is Poor. Even with the side airbags, the rating rises only to Marginal, matching the rating for the seats and head restraints.

The National Highway Traffic Safety Administration (NHTSA) is more forgiving. In NHTSA testing, the Charger does a good job, earning 4-star and 5-star ratings in all assessments. 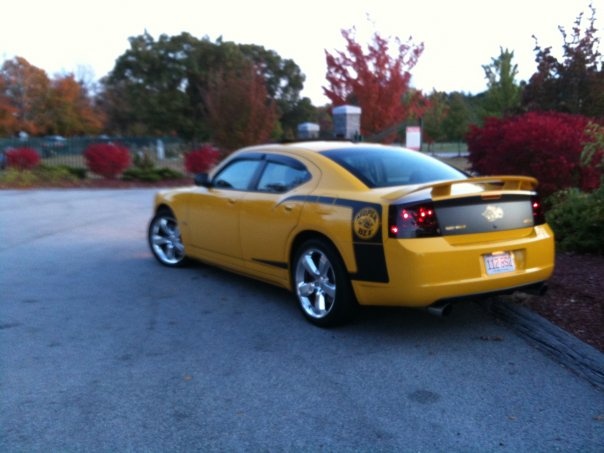 Given its size and the sophistication of its Mercedes-derived underpinnings, the Charger isn’t cheap. To get the SXT you’ll spend around $28,000, and a V8 engine runs more than 30 grand. Outfit the Charger SRT8 with all of the extras, and you’re looking at a $40,000 car.

At the same time, nothing else in the family sedan segment offers this kind of attitude, bravado, and outright performance.

Tj Never go to this place.

Guru9LRSQS hard to work on and no power

Users ranked 2007 Dodge Charger against other cars which they drove/owned. Each ranking was based on 9 categories. Here is the summary of top rankings.

Have you driven a 2007 Dodge Charger?
Rank This Car

07 Dodge Charger won't crank nothing just clicks and I notice the engine light won't turn on when I flip the switch change battery and everything seems fine only that the gas pump stays on for a lon...

Why Show Cars Not Wanted?

0 views with no answers yet
20

I’m interested in swapping out my 3.5 for a 5.7 hemi. Now, before we get started, I want to address all the people who start off these forums with, “Just trade it in durrrr.” I, like a lot of folk...

2007 Charger Will Not Start

2007 dodge charger will not start. All light are on. Radio works. Lights on dash comes on. It will not turn over. What can it be?