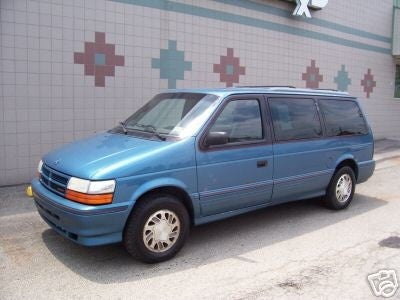 Have you driven a 1994 Dodge Grand Caravan?
Rank This Car

Theres no spair tire in the new caravans. its there way of meeting the EPA I guess. Plus they cut the cost we tire ,rim,and winch . metal is very thin. Seat sits too low for a short person to see ove... Read More

It had too high of mileage for my needs. Beautiful vehicle. Read More

We are very pleased with our Dodge Caravan. Felt it was a very good value. Read More

Itwas a great for a car that have low mileage. Read More

Its a great car overall. No issues the model runs great. It has all the convenience the family needs in a mini van. I have a 2019 dodge caravan GT and it has everything my family and I need. If you ha... Read More

I think Dodge Grand Caravan is one of the best vehicles on the road. We have owned about 10 of them over the years. Just sorry they quit making them!!! Read More

My new van is so smooth! I love the sleek leather and beautiful interior. The exterior is also very smooth and sleek. Read More

I have owned Dodge Grand Caravans for over twenty years and, although they are not the most durable minivans in the market, they are highly reliable and can consistently provide ten to twelve years of... Read More

Best vehicle I have ever had. Great dealership, nice people, courteous, forthright, gave detailed reports and even drove it to my destination. Easy to drive and lots of luxury features. Read More

Have you driven a 1994 Dodge Grand Caravan?
Rank Your Car →