Are you ready to start shopping for an economical new SUV? If it’s been a while since you last browsed new cars at your local dealerships, you might be surprised at some of the available new fuel-efficient SUV options. In the past few years, carmakers have made great strides in terms of designing new and efficient SUVs and crossovers, so you can have the benefits of increased passenger and cargo space without paying more at the pump. Our expert-curated list of the best MPG SUVs will show you the most efficient hybrid and gas-powered SUVs currently on the market, from a variety of classes and brands. This list includes plug-in hybrids, hybrids, and gas-powered SUVs, which use a couple of different types of ratings, so we consulted the Environmental Protection Agency (EPA) for estimated annual fuel costs. That way, you can compare different types of SUVs based on what you can expect to pay at the pump. 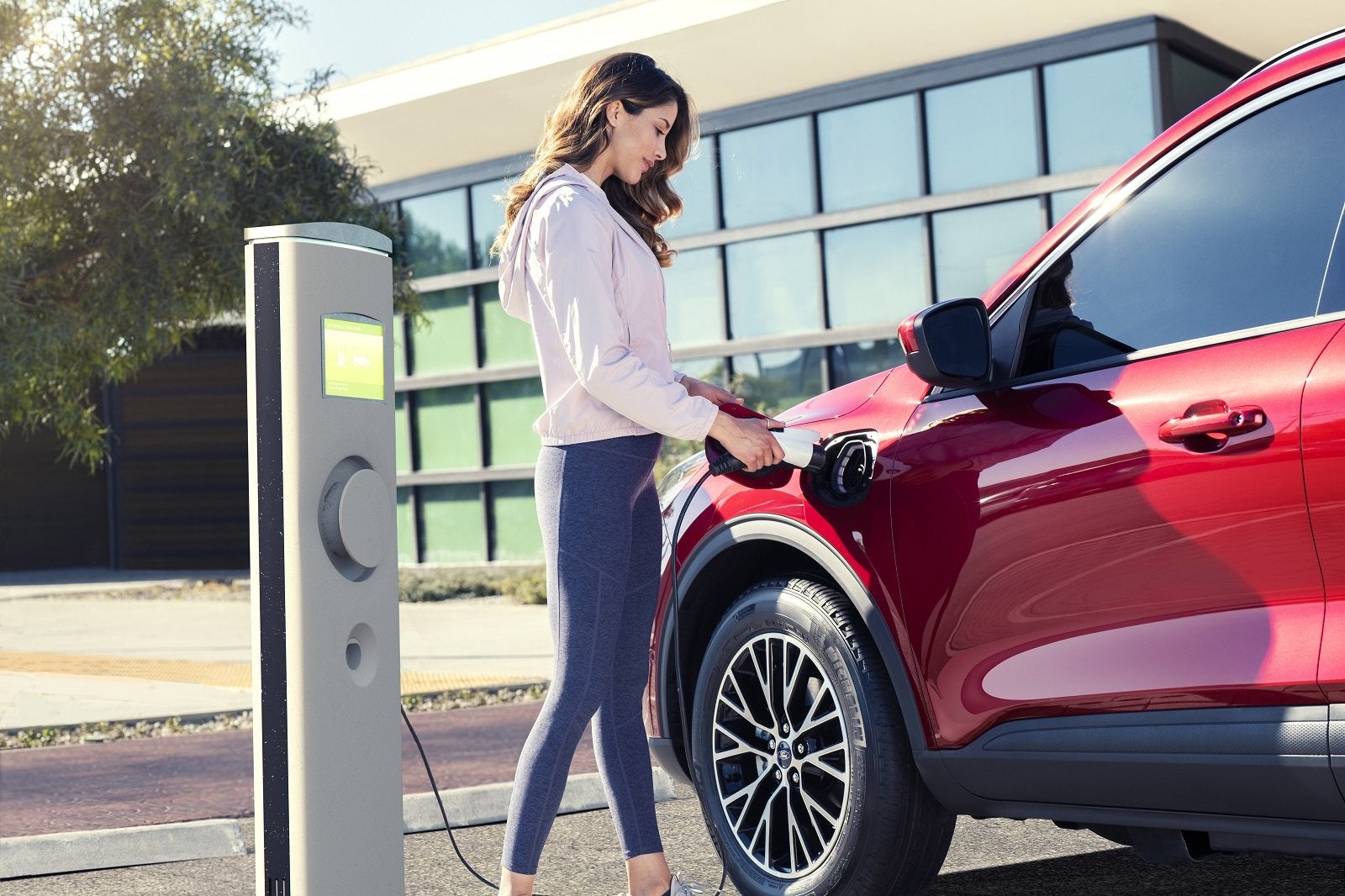 Best for: Efficiency combined with performance
Built between: 2020-Present
Priced from: $32,650

The Ford Escape is a stylish and practical compact SUV, and as part of Ford’s push into electrification, it now gets the hybrid and plug-in hybrid treatment. We’ll look at both of these Escape models, but EPA ratings show the plug-in hybrid comes first in terms of fuel efficiency. It’s powered by a combination of a 2.5-liter four-cylinder gas engine, an electric motor, and a lithium-ion battery pack, good for a combined output of 209 horsepower. It’s a great way to get an SUV that looks and feels mainstream but is a lot more efficient than what you’re probably used to.

According to the EPA, the Escape Plug-in Hybrid is available only with front-wheel drive (FWD). It’s rated at 102 MPGe combined in electric mode and 41 mpg combined in hybrid mode, with an estimated $700 per year fuel cost. 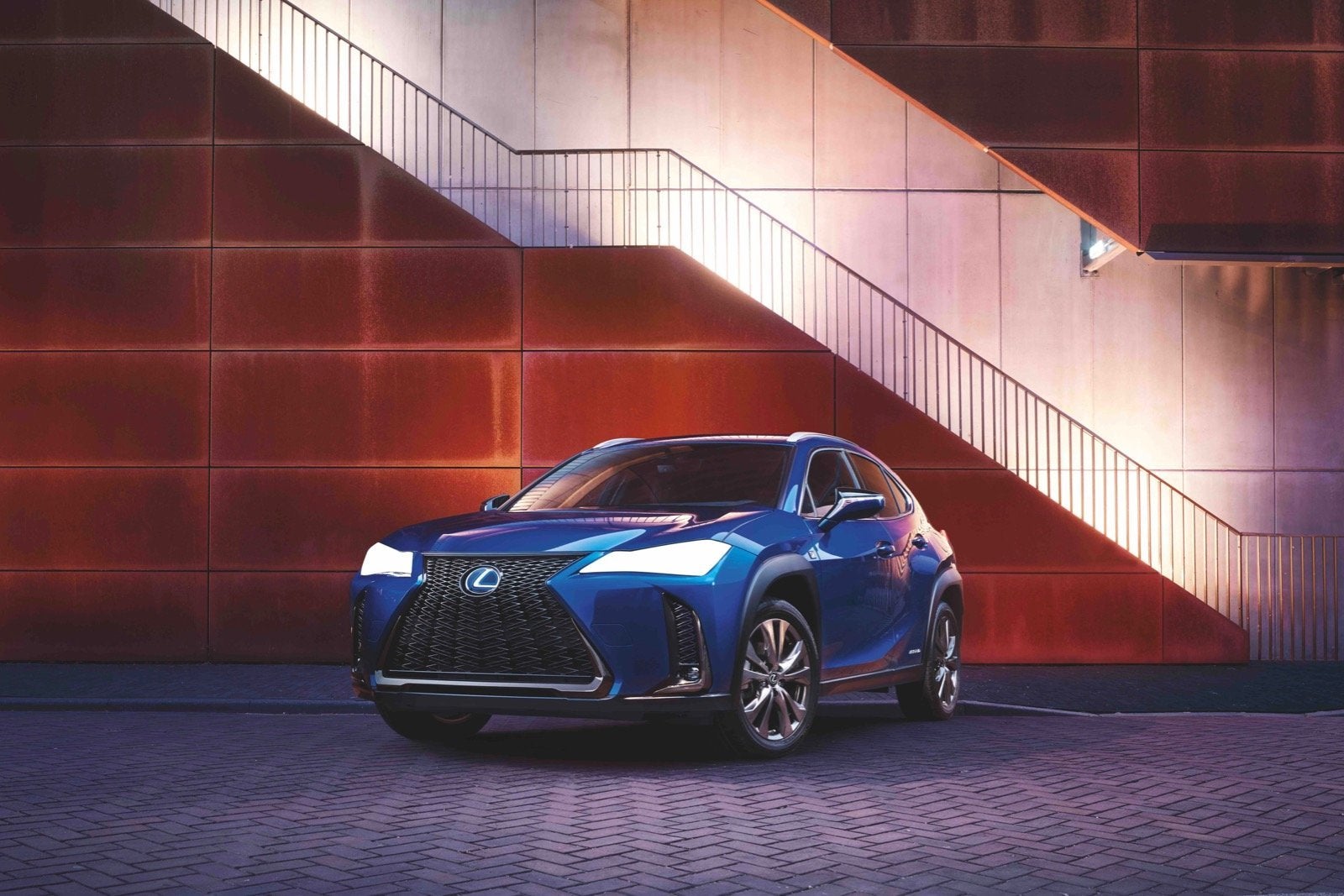 Best for: Comfortable and upscale efficiency
Built between: 2019-Present
Priced from: $35,100

The Lexus UX Hybrid is a peppy subcompact crossover with sporty looks and engaging, if not exactly exciting, driving dynamics. It’s on the expensive side for what it is, but it’s hard to argue with those fuel economy estimates. The UX Hybrid comes in one trim, the 250h, and is powered by a 2.0-liter four-cylinder engine, two electric motors, and a battery pack, plus all-wheel drive (AWD), and the combination is rated for 181 horsepower. It’s quick off the line thanks to the electric motors, but is otherwise comfortable rather than actually sporty. The EPA says the UX Hybrid is good for 41 mpg city, 38 mpg highway, and 39 mpg combined, with an estimated $800 per year fuel cost.

The UX Hybrid is stylish, but it’s basically an upfitted Toyota C-HR, which makes the price tag a little harder to swallow. It’s a little tight inside and not quite as nice as veteran Lexus owners might expect. 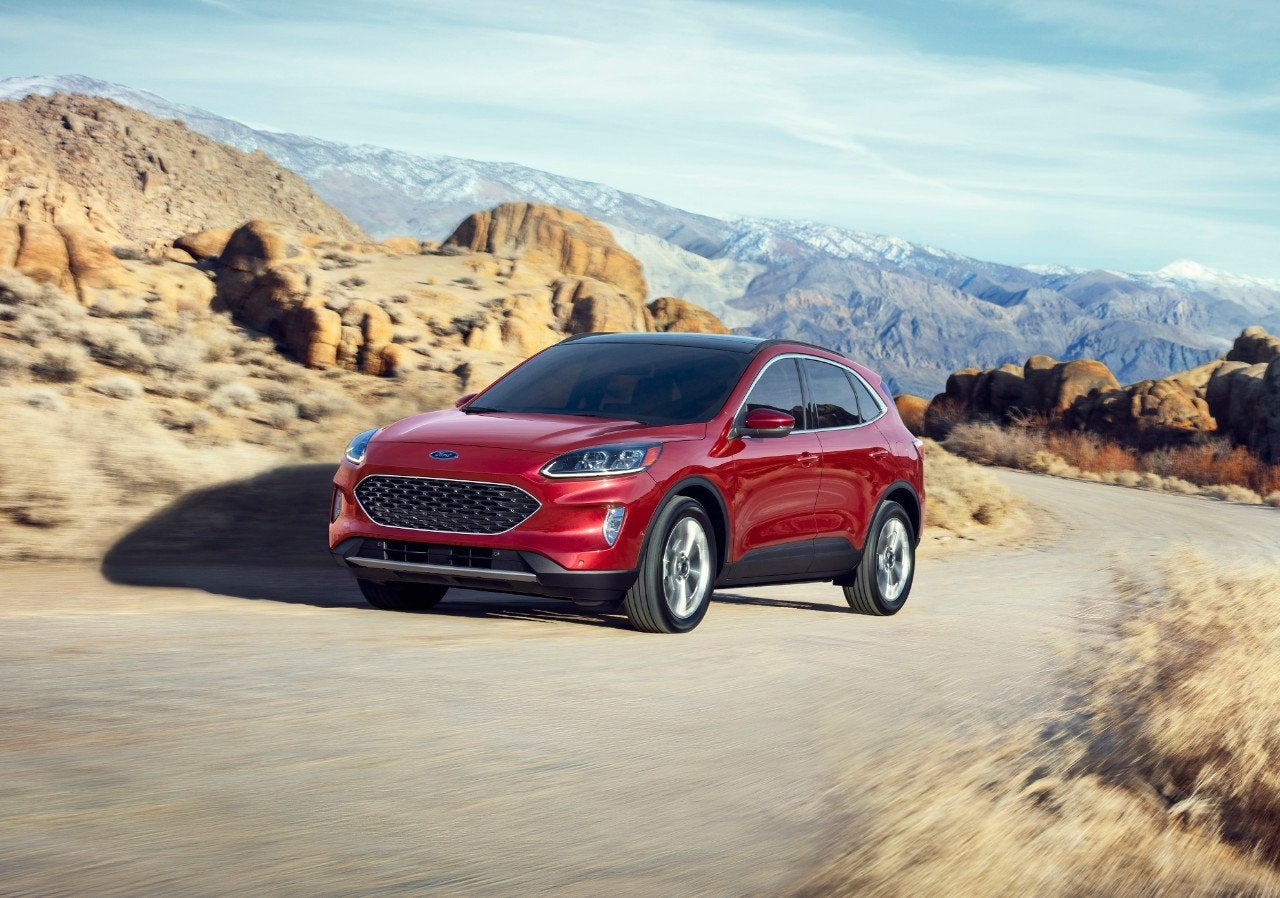 Best for: If you like the Ford Escape Plug-in Hybrid but not the premium price
Built between: 2020-Present
Priced from: $27,605

"Wait a minute," you might be thinking. "Aren’t there older Ford Escape Hybrids out there?" Yes, there are, but the early '00s version that was discontinued after the 2012 model year is a totally different beast. The modern Escape Hybrid, making its debut for 2020, benefits from more advanced hybrid technology and is well worth a look.

The Escape Hybrid gets a 2.5-liter inline four-cylinder engine, an electric motor, and a 1.1-kilowatt-hour battery, with a combined total output of 198 horsepower. It comes standard with FWD, with ratings of 44 mpg city, 37 mpg highway, and 41 mpg combined. With the optional AWD system, ratings drop just slightly, to 43 mpg city, 37 mpg highway, and 40 mpg combined. In either case, the EPA’s estimated annual fuel costs come in at $800. It’s a great way to get a practical SUV at an affordable price. 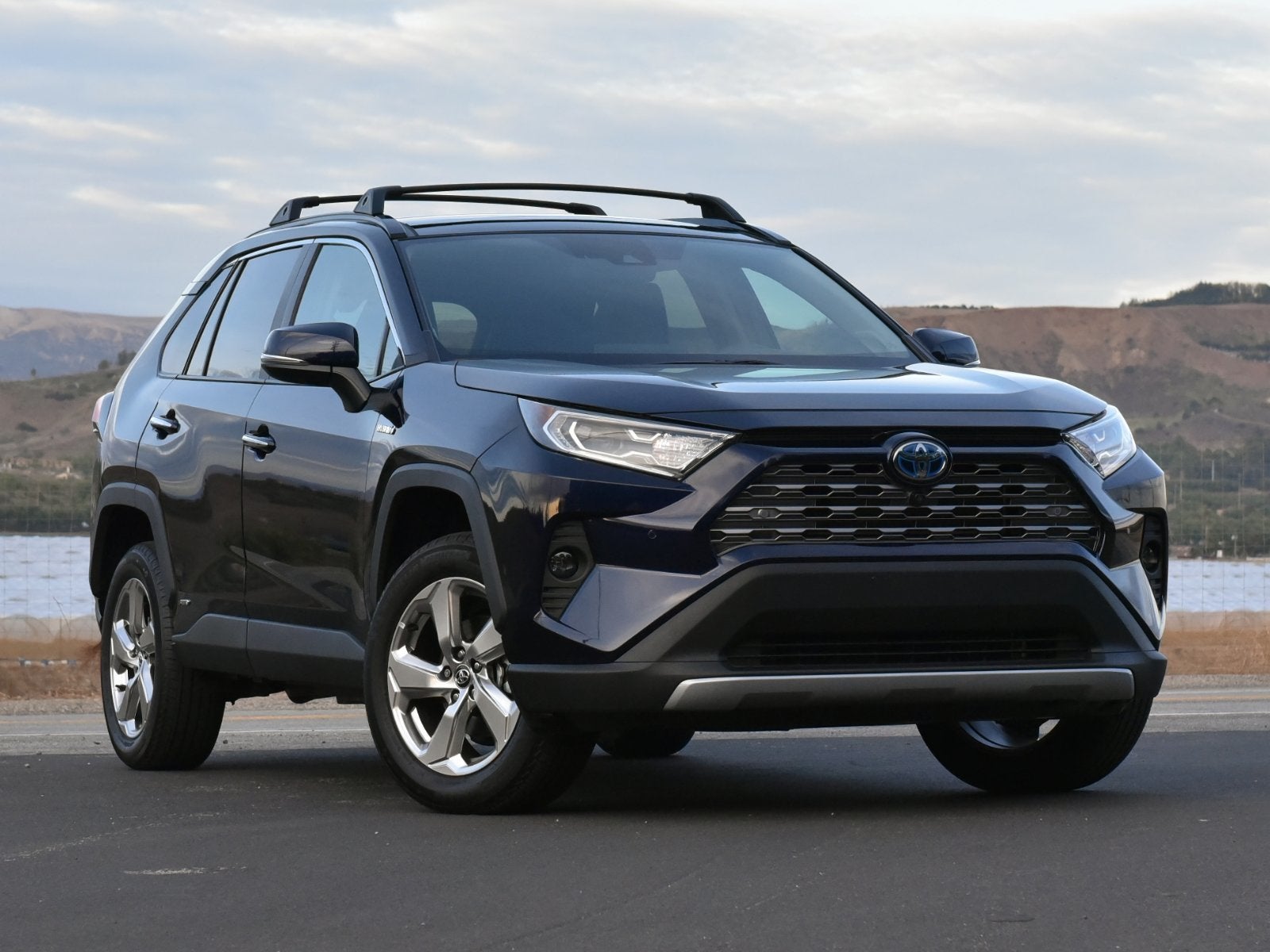 Best for: Practicality and efficiency
Built between: 2016-Present
Priced from: $28,650

The Toyota RAV4 Hybrid is a more efficient—and more powerful—version of the brand’s popular and long-running compact SUV model. It’s comfortable to drive and offers good space for passengers and cargo. The RAV4 Hybrid gets a 2.5-liter, 176-horsepower four-cylinder engine combined with two electric motors—one on each axle—and a third electric motor that functions as a starter and generator. It’s rated at 219 horsepower, which is a 13-hp boost over the regular RAV4. That, too, makes the RAV4 Hybrid worth a look if the base RAV4 has been on your radar.

The RAV4 Hybrid is rated for an impressive 41 mpg city, 38 mpg highway, 40 mpg combined, and thrifty $800 per year fuel estimates, despite coming standard with AWD. If you’re looking for even more efficiency out of a RAV4, check out the 2021 RAV4 Prime, which adds plug-in hybrid technology to the mix. 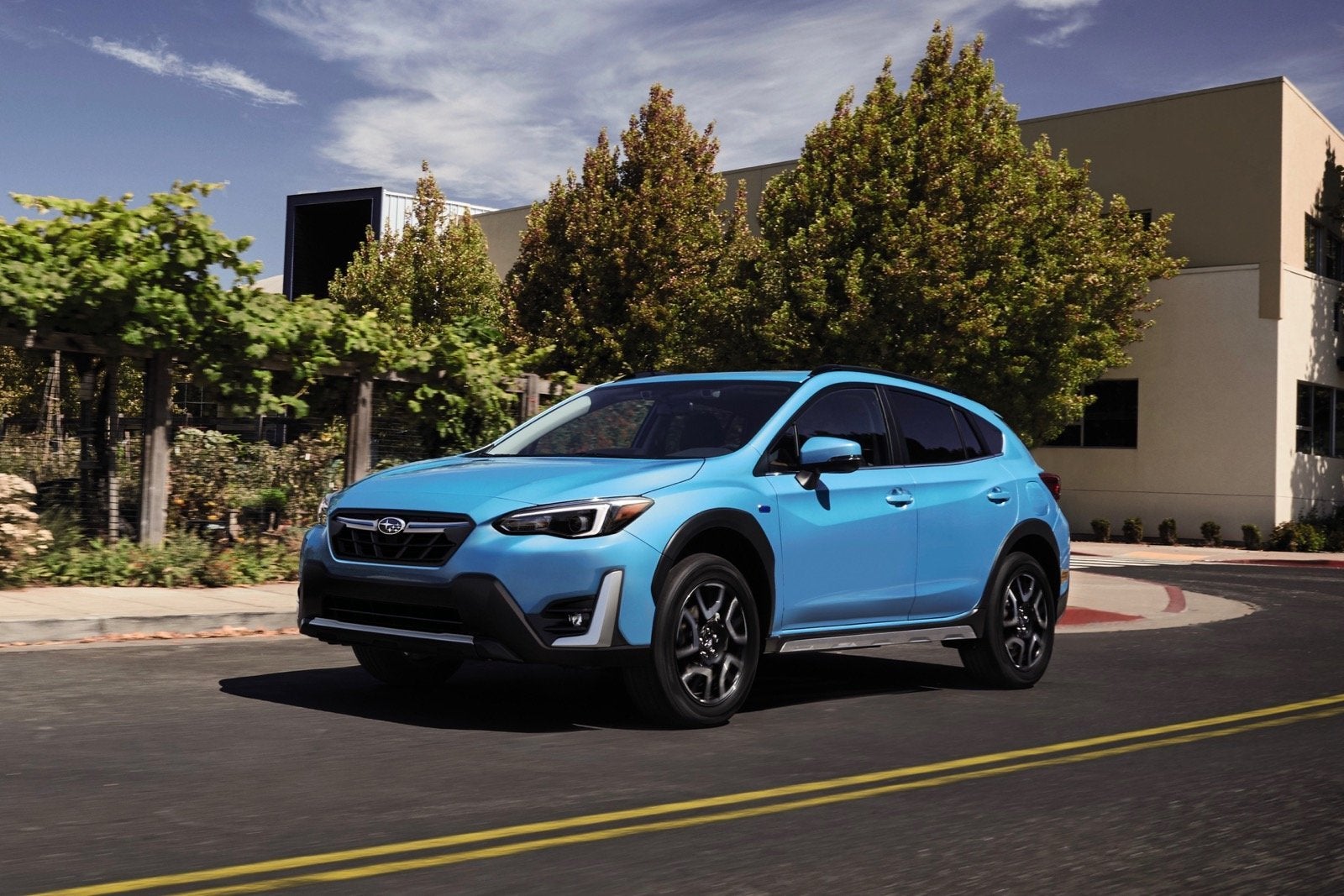 The Subaru Crosstrek Hybrid is another model that was discontinued after early efforts stalled out. However, it reappeared in 2019, and this time around, it featured plug-in technology. On the upside, that makes the Crosstrek Hybrid pretty efficient. On the downside, the Crosstrek is basically a lifted Impreza hatchback masquerading as a subcompact crossover, and this particular version of it is quite pricey. Plug-in hybrids typically have a price premium, but in this case, it’s a lot. It’s efficient and well-equipped with lots of safety features, but this is luxury money for a not-luxury SUV.

So, what do you get for your 35 large? Every Crosstrek Hybrid comes powered by a 2.0-liter boxer four-cylinder engine combined with two electric motors and a large lithium-ion battery, rated for a combined 148 horsepower. All-wheel drive comes standard, too. In all-electric mode, the Crosstrek Hybrid gets 90 MPGe combined, and 35 mpg combined once the electric range is depleted, for an estimated $850 per year fuel cost. 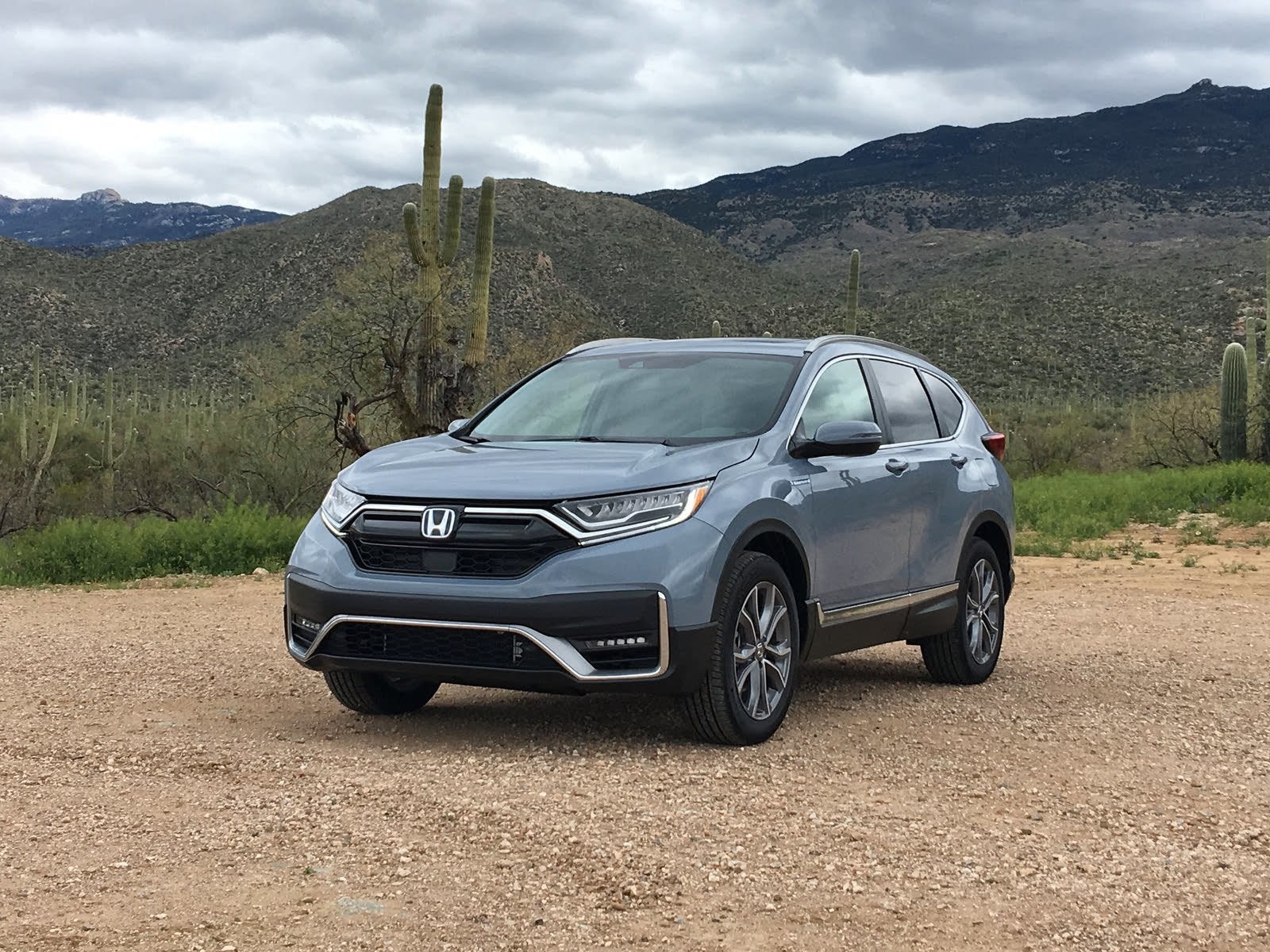 Best for: Honda practicality with improved efficiency
Built between: 2020-Present
Priced from: $30,560

The Honda CR-V has been around for ages, and is regarded as one of the best values in the compact SUV segment. It’s kind of a surprise that it’s taken Honda so long to put forth a hybrid version of the CR-V, especially since other Honda vehicles have received the hybrid treatment in the past.

The CR-V Hybrid is yet another example of a hybrid crossover that makes more power than the regular gas-powered version upon which it is based. The CR-V Hybrid’s powertrain consists of a 2.0-liter four-cylinder gasoline engine, an electric generator/starter motor, and a propulsion motor. The system is rated for 212 horsepower and 232 pound-feet of torque—a considerable improvement over the traditional CR-V’s ratings of 190 horsepower and 179 pound-feet of torque. Not only is it more efficient, it’s more interesting to drive. All-wheel drive comes standard. According to the EPA, a CR-V Hybrid is good for 40 mpg city, 35 mpg highway, 38 mpg combined, with a budget of $850 per year for fuel. 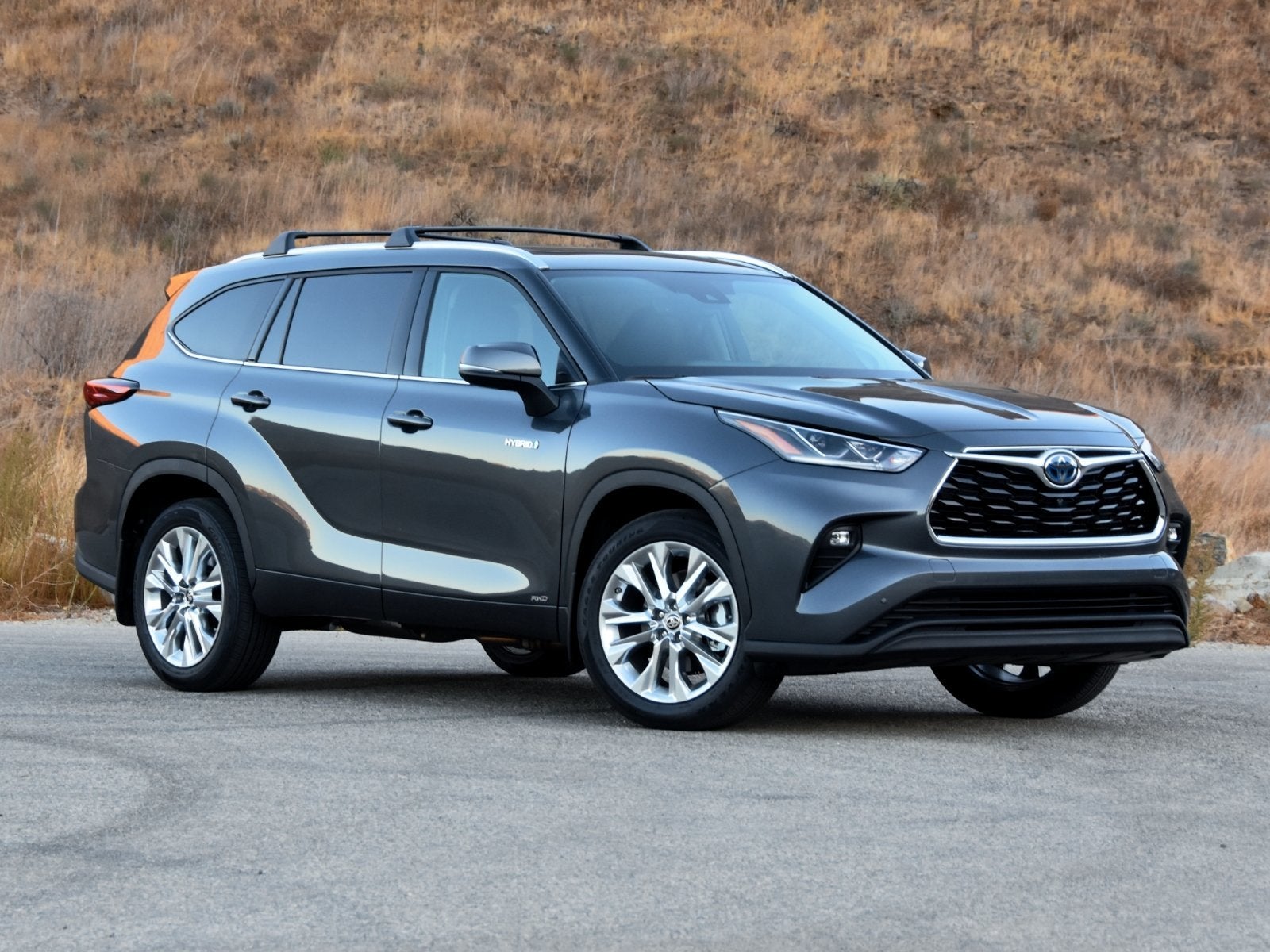 Best for: Families who need three rows of seating
Built between: 2006-Present
Priced from: $38,510

The Toyota Highlander is consistently a great choice in the midsize SUV class, but if you have more money to spend, the Highlander Hybrid is an even better choice. The Highlander Hybrid looks good and will help keep every member of your family safe and comfortable, and it’s one of the most efficient vehicles on the market that offers seating across three rows.

The Highlander Hybrid was fully redesigned for 2020, now powered by a 2.5-liter four-cylinder engine rated at 186 horsepower and 175 pound-feet of torque. There are also two electric motors—one to juice the wheels and one to charge the hybrid battery. These motors boost total system output to 243 hp. With standard FWD, the Highlander Hybrid checks in at 36 mpg city, 35 mpg highway, and 36 mpg combined, with an estimated $900 per year fuel cost. Upgrading to AWD sacrifices just one mpg in the city and combined ratings, with the same annual fuel cost estimate. 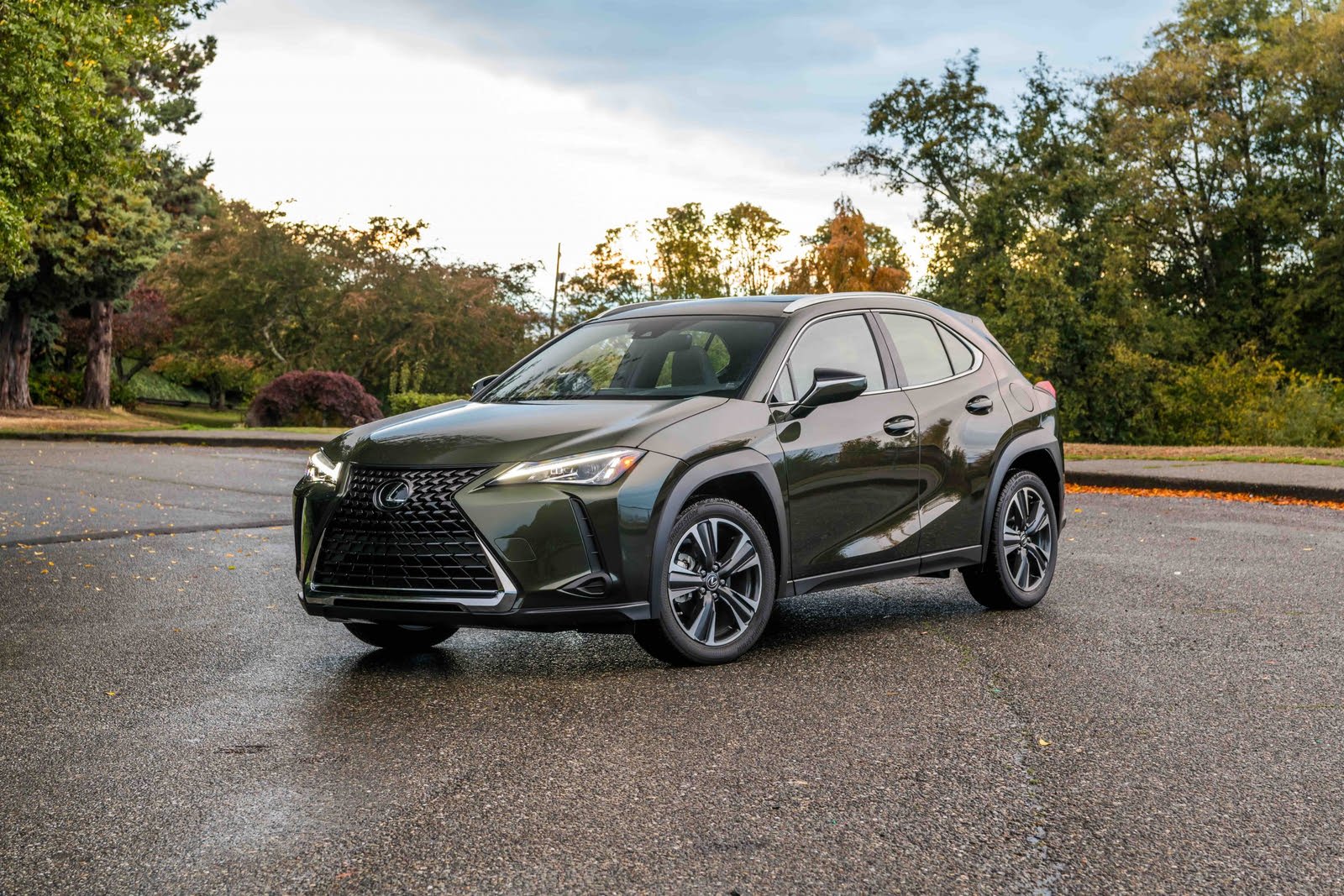 Best for: Small SUV efficiency with added luxury
Built between: 2019-Present
Priced from: $32,900

We’ve already seen the hybrid version of the Lexus UX, but if for whatever reason that doesn’t work for you, you can still achieve competitive fuel economy ratings with the base version. The UX was introduced for 2019, so it’s still new and fresh, and it’s the smallest SUV in the Lexus lineup, which also makes it one of the most affordable models the brand currently offers.

The UX comes standard with a 2.0-liter four-cylinder engine rated at 169 horsepower and 151 pound-feet of torque. It’s available in FWD only. These are modest specs, especially for a luxury vehicle, but some buyers might consider the EPA ratings of 33 mpg city, 29 mpg highway, and 37 mpg combined—and $950 per year for fuel—worth the sacrifice in performance. It’s worth noting that the UX Hybrid discussed above comes with AWD, but it also costs a lot more. For buyers on a budget, the regular UX is worth a look. 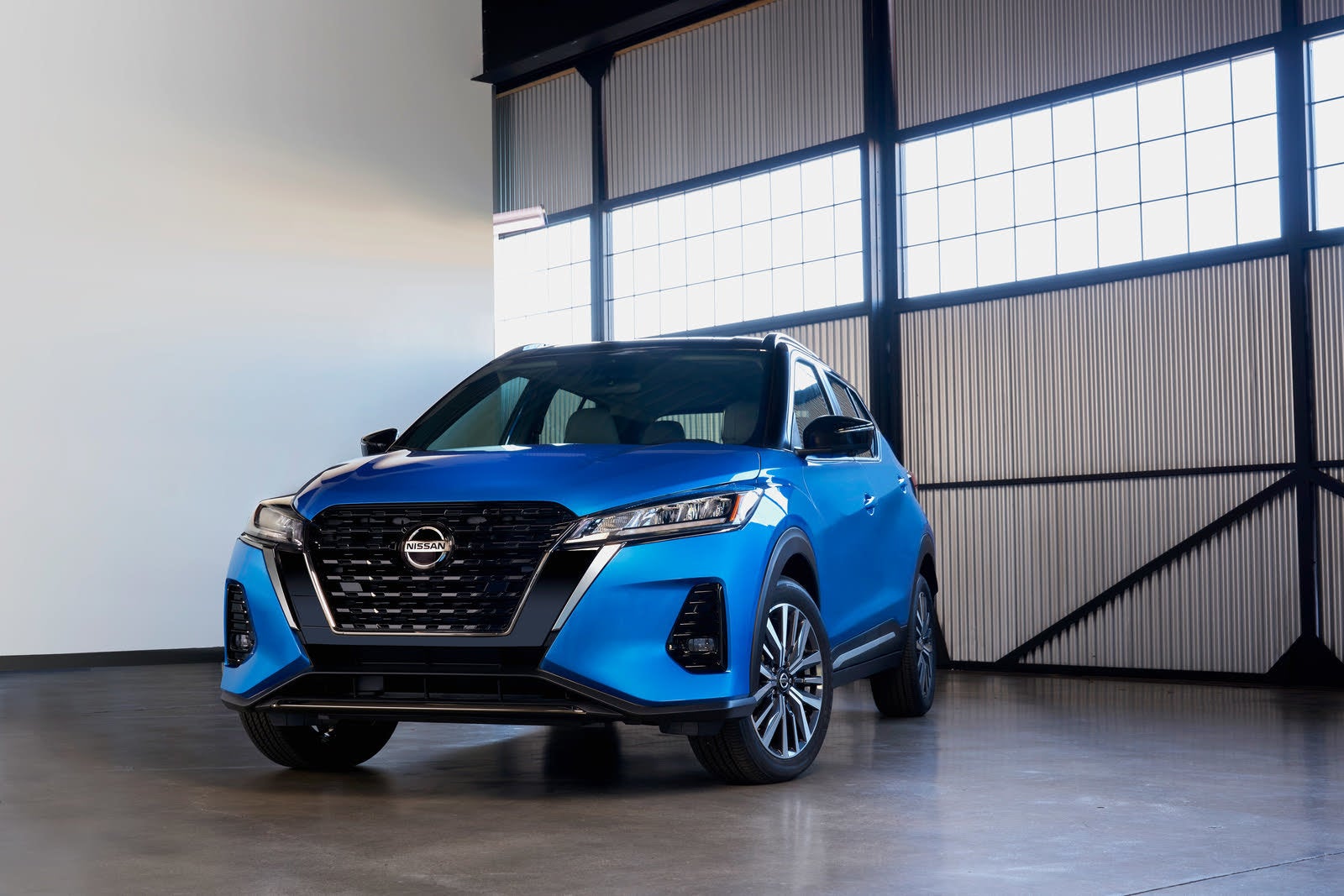 The Nissan Kicks is another SUV with a regular gas engine that’s efficient enough to hang with its hybrid rivals. This subcompact SUV is a relatively recent addition to Nissan’s lineup, and features the same family-friendly design and value-oriented pricing structure as the other members of the brand.

Despite a 2021 refresh, every Kicks still gets the same engine—a modest 1.6-liter inline four-cylinder with 122 horsepower and 114 pound-feet of torque. Though AWD is a common option in crossovers, you won’t find it here, as the Kicks is one of a number of new entrants to the class that come in FWD only. On the downside, that sacrifices some potential utility, but on the upside, the Kicks lands great EPA fuel economy ratings without employing hybrid technology that would inevitably increase its starting price. According to the EPA, the Kicks is good for returns of 31 mpg city, 36 mpg highway, and 33 mpg combined, or about $950 per year in gas. 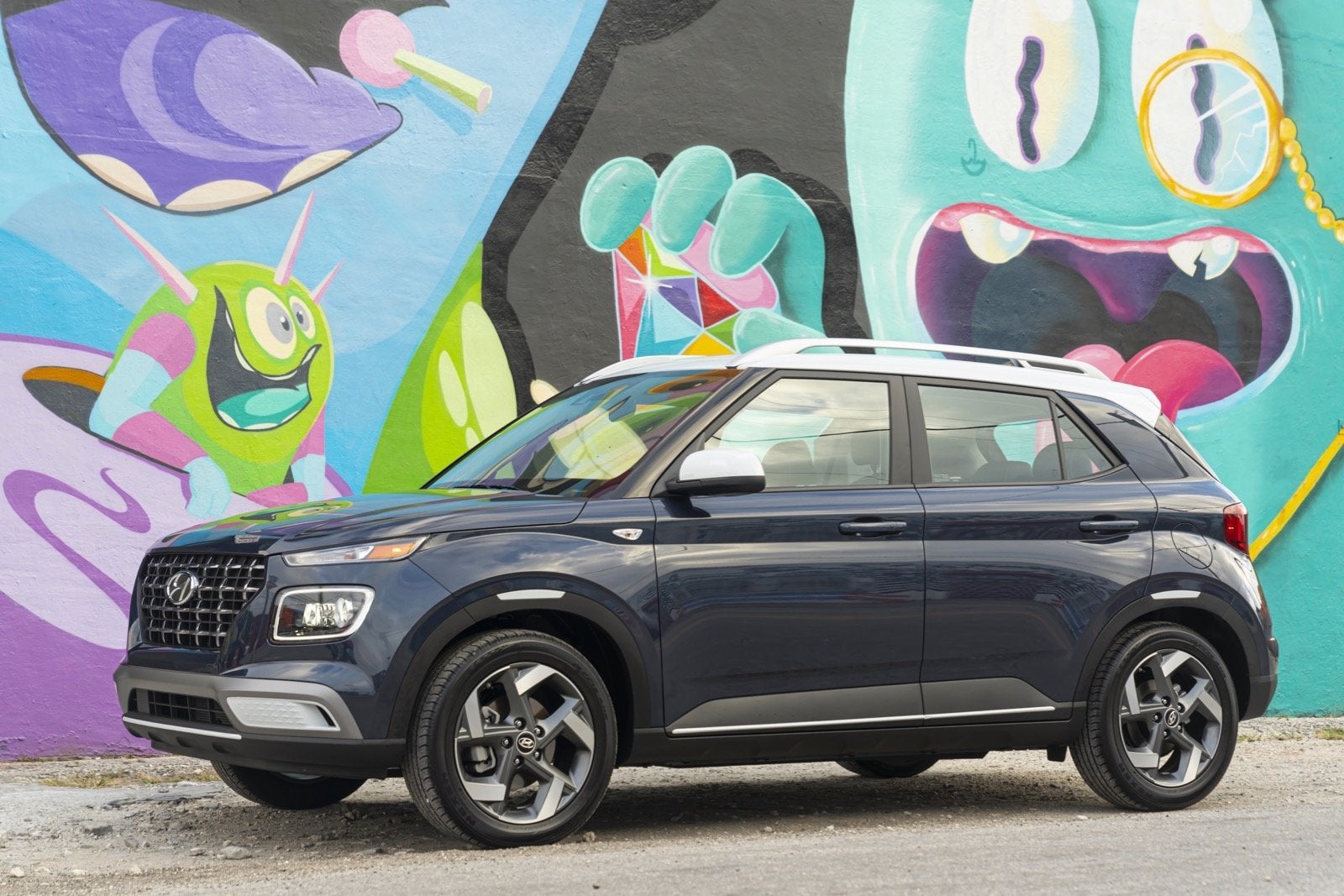 Best for: Those in search of an affordable crossover SUV
Built between: 2020-Present
Priced from: $18,750

The Hyundai Venue was introduced for the 2020 model year. Though Hyundai had just entered the subcompact crossover space with the Kona, the Venue manages to carve out a niche as a sub-subcompact model by undercutting the Kona in price and performance. To wit, the Venue’s only available with a 1.6-liter four-cylinder engine rated at 121 horsepower and 113 pound-feet of torque, paired with FWD, but comes close to some hybrid SUVs with fuel economy ratings of 30 mpg city, 34 mpg highway, and 32 mpg combined, for an estimated $1,000 per year in fuel costs.

That leaves the Venue’s driving dynamics on the dull side, but for an affordable city-friendly vehicle, it’s a great choice, even if you disagree with the EPA’s classification of the Venue as an SUV and think of it more as an efficient compact hatchback. As you’ve seen from the vehicles we’ve already looked at, there’s no real reason to avoid a hybrid or plug-in hybrid SUV, but the affordable Venue manages to return great fuel economy with a traditional gas engine.