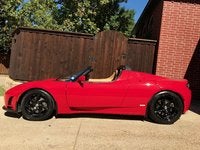 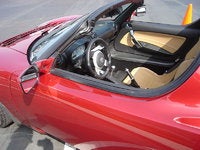 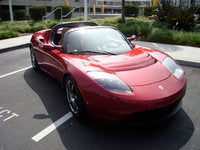 Is The Top A Removeable Hard Top Of Cloth ?

What Do You Think Of The 2009 Tesla Roadster?

Built by Lotus, inspired by Porsche and McLaren, and named after the most underrated scientist in modern history, the Tesla Roadster has been an anomaly from its very beginnings. It looks strangely similar to a Lotus Elise, but it’s wider, heavier, and shares only 6% of its parts with the svelte speedster. Its body panels, made of 100% carbon fiber, are produced by Sotira, a French company. And yet it’s considered an American product with a proper VIN and everything.

It seems the gents at Tesla wanted to make sure the foray into electric propulsion was a truly global endeavor. Once the Tesla Roadster’s Lotus-designed chassis is built in Hethel, UK, final assembly takes place back in its birthplace of Silicon Valley, in Menlo Park, California, with a BorgWarner transmission and brakes and airbags from German manufacturer Siemens. The powertrain, at least, is all Tesla.

Having just passed the 1,000-unit mark back in January, no one is going to argue the Roadster is ready to oust any petroleum performers – unless it’s on the track. Its three-phase, four-pole electric motor offers immediate torque, and I do mean immediate. Not at 1,500 rpm, not even 500 rpm - from 0 rpm. And it offers its peak torque at that number, all the way up to 6,000 rpm. That’s 200 lb-ft in the Base trim and 295 in the Sport, good for a sprint to 60 of 3.9 and 3.7 seconds, respectively. It’s a wholly different experience than a vehicle motivated by internal combustion, with no waiting to enter the power band. It’s shocking and visceral and brutal in a way that will incite childish giggles.

Tesla could have rested on these characteristics and the impressive performance and been satisfied with a simple demonstration of the Roadster’s capabilities, especially considering it does all this while still offering a nearly 250-mile range on batteries that can be fully recharged in just a few hours. Instead, they’re delivering the Roadster with such luxury amenities as a fully adjustable suspension and powertrain, carbon fiber and leather interior accents, push-button gear selection, and a video touch-screen display for navigation, Bluetooth, and accessory controls. Of course this all comes with a luxury pricetag of $109,000 for the Base and $128,500 for the Sport trim – but the Roadster wasn’t always the polished performer being delivered today.

Matt Damon was one of the first 100 people to order a Roadster, and as such had to suffer all the early hiccups and road bumps the model endured. These early issues included transmission problems and a recall for the first 345 units that necessitated tightening of the rear, inner hub flange bolts – an oversight that could result in a loss of control and crash. Not specific to the model, Lotus reported it was an issue at their assembly line that affected some of their own vehicles as well. Still, it invoked a unique response from Tesla, namely sending out an army of company-trained technicians as part of their “mobile service units,” addressing repairs directly at the customer’s house or office. This is part of Tesla’s desire to parallel the model of companies like Apple and other non-automotive retailers, selling and dealing directly with the customer, rather than operating through the intermediary of franchise dealerships.

Is it enough? Can Tesla’s new approach to automotive sales, service, ownership, and propulsion actually remap the mindset of the American consumer and abort a century-long love affair with internal combustion? If nothing else, it's certainly trying, and we’re running out of reasons to say no. That said, with showrooms now open in London, Munich, and Monaco, perhaps American adoption won’t matter, and Tesla’s global approach will end up making a lot more sense than anyone initially thought.