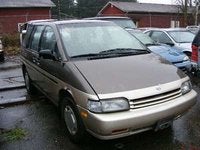 I Banged On The Horn Too Hard When Someone Turned In Front Of Me And It Wou...

Are there any cross-overs for this in the tank fuel pumps in other models?

Do 1990 Nisson's have any inherent problems with headlights?

Where Is The Transmission Fluid Reservoir?

Where is the transmission fluid reservoir??

The Axxess, introduced as a 1990 model, was Nissan's first foray into the U.S. minivan market. It was a super-mini van, somewhere in between a station wagon and a minivan.

The Axxess offered many innovative features, like dual sliding doors. Despite its small size, it offered plenty of passenger and cargo space.

Though the Axxess has a handful of loyal owners, it may have been a car before its time. Somehow, a station wagon/minivan crossover appealed to very few people at the time, and the Axxess was only offered for one year in the U.S. before being discontinued due to slow sales. Nissan's next minivan, the Quest, would not show up for three more years.