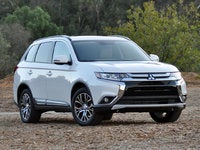 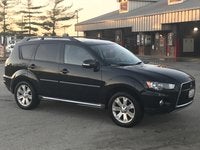 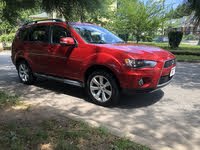 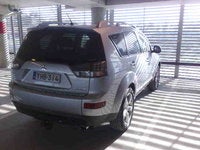 Today after 15 minutes of driving ASC light, ABS light, and radio would turn on and off. Next engine light on and off, next radio completely shut off, rpms stayed at 2 and speed stayed at 0 while d...

How Does The Under Engine Sheild Fit

My under engine shield has come off and I need to see how it is secured. It looks as though I have to undo some nuts on the front plastic panel. Is this correct

2020 Mitsubishi Outlander Will Not Start

My 2020 Mitsubishi Outlander stop start button will not start why

Where Is The Restart Button On The Fuel Pump

Where is the fuel pump reset button located

The Mitsubishi Outlander was introduced in the U.S. market for the 2003 model year. The Outlander was based on the 2001 ASX (Active Sports Crossover)concept vehicle, and it embodied the Japanese auto maker's intentions to blend the driving ease of a sedan with SUV capabilities and convenience. The Outlander gets a rugged and athletic-looking exterior treatment, which was modified slightly during the first year of production. A second generation model arrived in 2005.

Mitsubishi designers felt that it was necessary to give the Outlander a considerably bold look, in an attempt to set it apart from a long list of competitors. Mitsubishi has dealt with the challenges of being a fringe player in both the sedan and SUV markets, and the company has been unable to make a significant dent in Honda or Toyota sales. The Outlander did not initially offered the same interior spaciousness of the Toyota Highlander, but a third row of seating was added for the second generation.

Through the years, Mitsubishi has experimented with a couple of engine options for the Outlander. The compact crossover SUV was originally offered with a 2.4 liter inline four, which generated 140 horsepower. This engine was paired with a four-speed automatic transmission, routing the the power to either the front wheels or all four. A boosted version of this engine arrived in 2004, bumping horsepower to 160. The second generation Outlander received a 3.0 liter V-6, which generated 220 horsepower ans 204 pound-feet of torque. This engine was paired with a new six-speed automatic with manual shift feature.

The Outlander trims have changed little since the SUV's introduction in 2003. A upscale Limited model was added to the LS and XLS trims in 2005, and a new entry-level ES model arrived for the second generation. All styles were equipped with full power accessories, air conditioning, cruise control, a CD player, a full size spare and intermittent wipers.

Most reviewers have given the Outlander the nod as a viable competitor in the crossover SUV segment. Pros include full economy, value, nimble handling, and distinctive styling. Unfortunately, the Outlander does not offer the same interior space or the cushioned ride of some competitors.