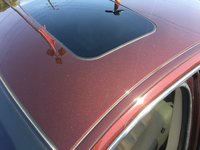 I have a 2000 Mercury Sable with a 3.0L DOHC V6 Duratec engine. Sometimes at cold start up it run really rough and will cause the check engine light to come on. I have taken it to a parts store and ...

The engine turns easy and tries to start but doesn't,sprayed fuel into intake and same thing , and sounds like it's getting spark ,so what else would you check and how,crank sensor ,can sensor how d...

JUST stopped working going down the road. Will not move in any gear

why are dome light and door locks and door alarm are going nuts while driving? 2003 sable

When Mercury launched the mid-size Sable four-door sedan in 1986, it set off a design trend that would last through the 1990s and into the early 21st century. That design trend was a move to more aerodynamic, rounded styling. It was a trend that would soon draw in other Mercury/Ford vehicles, such as the Taurus, as well as influence the designs of a number of vehicles from other domestic and foreign automakers.

The early Sables were distinguished by their grill-less front ends with a light bar between aerodynamic headlights, and their almost pillarless side profiles, providing excellent visibility for the driver.

The base engine for the original Sable was a 90-horsepower, 2.5-liter four cylinder, and the car was available in a number of trim packages with either a five-speed manual or a three-speed automatic transmission. A V6 version was also available.

The look of the Sable was updated in 1992, with a slimmer front light-bar and headlights and a more contemporary design. The car was stretched in length by almost four inches, and engine power was bumped up as well, with all new Sables receiving a 140-horsepower V6. This helped distinguish the Sable from the Taurus, and establish the former as a more upscale vehicle.

The third generation of the Sable arrived in 1996, with a drastic makeover that included oval headlights, an oval grille opening, and oval taillights. It was a look that tended to be rather polarizing -- drivers either loved or hated it. But enough loved it to make the Sable a very profitable vehicle for Ford.

By 2005, the Sable had become dated and even a bit musty, so Ford replaced it in the lineup with the Montego. But by 2008, with Ford in dire need of a few hits, the automaker decided to bring back many of its more popular vehicles over the past couple decades, even if in name only. So just as the Ford Five Hundred was redubbed the Taurus, the Mercury Montego was redubbed the Sable.

For 2008, the Sable's exterior styling has been updated again, with a new grille and front bumper, dual chrome exhaust tips, projector-beam headlamps, redesigned LED taillamps, integrated turn signal markers at either end of the front bumper, 17-inch seven-spoke bright aluminum wheels, and a satin finish on the sideview mirrors and door handles. It's a look that should serve the Sable well as it rides into the coming years.