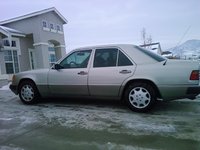 Why Would I Have Low Voltage On Power Side Of Fuse 2 Whether Key Is On Or O...

fuse 2 controls power windows, comfort module, a relay, wipers, sliding roof switch from fuse 9 (always on) according to the manual. When the key is on or off, i get low power to power side of fuse 2...

Help I have a 1992 400E Model and someone put bleach in my gas tank thankfully I was told before I started it up and I got it cleaned out. However I still had a fuel pump go out on me and I did get...

What type of fluid does 400E tranny use?

My 1992 Mercedes Is Not Charging,wires Exposed Going To The Battery

The other feature was the introduction of the 400SEL with its long-wheel base. The length of the standard 400-Class model was 187.2 inches, while the SEL stretched that out to 205.2, primarily to compete with long-wheel-base models from other luxury carmakers, including BMW.