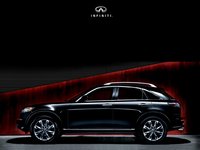 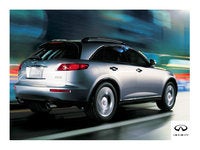 I'm New Here Does Is Anybody Here No The First Sign Of Engine Light Coming ...

What Do Sat Mean On The Dash

What has been changed??? tweety68

Replacing the outgoing QX4 SUV and built on the same platform as the Nissan 350Z, the Infiniti FX45 luxury crossover is more sports car than family wagon. Even its profile strays from that of your typical SUV, with a fastback-inspired roofline and rear spoiler. Debuting in 2003, along with the smaller FX30, as an all-wheel-drive crossover with a 4.5-liter, 315-hp V8, the Infiniti FX45 trades interior functionality for high-spirited fun.

Loaded with luxury features, such as heated leather seats, power front seats with memory settings, and a 6-CD/MP3 changer, the Infiniti FX45 also rates five stars in front and side impact crash tests, proving that it's just as suitable for families as for driving enthusiasts. The FX45's all-wheel drive and low ground clearance are not suited for off-roading, but do provide an extra sense of security. In 2005 it was the first vehicle to offer a lane-detection system, which uses a combination of cameras and sensors to warn drivers when they start to drift. This feature became standard in the 2006 update, which also added more horsepower and more standard features like a rearview camera, a sunroof, and Bluetooth, along with aggressive styling tweaks to the front end.

With only two rows and a cargo area that maxes out at 65 cubic feet, the FX45 holds less than most of its competitors, but its light weight and sports-car platform mean it's also a lot faster (0-60 in 6.5 seconds) and hugs corners tighter. The engine power, acceleration, and overall exhilarating ride keep owners happy, steadily increasing the popularity of the FX45. Although the sloping roofline causes rear visibility problems and the sport suspension can feel rougher than most SUVs, those looking for a combination of smooth luxury, high safety standards, and sporty fun should check out the FX45. Rumor has it a major redesign for 2009 will put a 5.0-liter, 390-hp V8 under the hood.