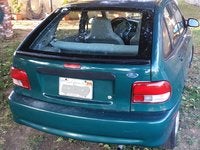 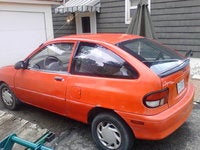 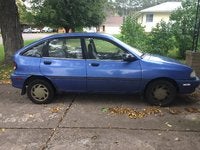 Hello! Tell me please if you know. Where can i find a VIN number in Ford Aspire? Regards!

What Is The Average Mile Life?

My baby is at 1500000 its good minus no radio no ac. Check engine light won't go away and airbag light but heater is awesome and I just want.to know how much life she has to go.

Driving down the road the flashers come on by themselves and they also shut off. When the car sits after the flashers issue the battery is drained. Could it be a fuse, wire or relay switch?

Does anybody have a 90' Ford aspire for sale cheap

97 aspire runs very smoothly until you stop, in drive, viberates when stopped. almost like it wants to die but still runs smooth. just had timingkit and water pump replaced.thank you

The Ford Aspire was an interesting, if perhaps misguided, attempt by the folks at Ford to capitalize on the subcompact craze that gripped the rest of the world, especially Europe and Asia, in the 1990s. The Aspire never made much of an inroad in North America, though, so the life of the model line was short-lived.

Designed by Mazda, the Aspire replaced the Festiva as Ford's entry-level minicompact offering. The Ford Festiva had not managed to capture much market share in a climate dominated by big SUVs and ever-expanding sedans; the Aspire brought some solid engineering and a shapely, if basic, look to the table.

Still, in a market where bigger was better and power was all, this little car and its 4-cylinder, 63-horsepower engine just didn't catch drivers' imaginations. It's kind of a shame, too: where the Aspire really shone was in fuel efficiency, with an EPA estimated mileage per gallon of 29 city, 34 highway. Perhaps the Aspire was just ahead of its time?