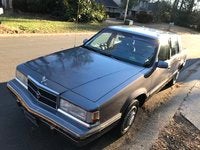 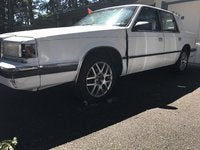 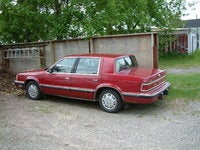 My 92 dodge dynasty has been stuck in limpnmode for a bit. I have changed the speed input and output sensors and just recently changed the valve control solenoid, but it's still not shifting while ...

So, my 92 dodge dynasty (3.3 v6) is in limp mode it down shifted very harshly 2 weeks ago and has not been able to shift while in drive since. I have replaced the input and output sensors and while...

What Could Be Wrong If The Turn Signals Aren't Working?

Neither side of the turn signals are working. Tried manually moving the switch up and down still nothing. Tried the emergency flashers didn't work as well. Does anyone know what could be wrong?

My 1989 Dodge Dynasty Will Not Stay On It Turns Over .

need to know what or how to fix my dodge it turns over when we start it but will not stay on. the fuel pump is working . would anyone have an answer to fix this

230 views with 2 answers (last answer about a year ago)

100 views with 5 answers (last answer about a year ago)

On the surface, the Dodge Dynasty is a practical family car -- square, plain, and roomy enough inside to seat four very comfortably. But this four-door mid-size sedan, a less expensive version of the New Yorker, without all the bells and whistles, had a lot of horsepower under its hood.

Like the New Yorker, it was built on the Chrysler C platform, but was only available in two trims, base and LE, it changed little over its six-year lifespan. It came standard with a four-cylinder engine, but most owners opted for one of the two V6 engines, which hit over 140-hp. Despite its large size and powerful engine, it exhibited easy handling and amazingly quick acceleration.

Though interior options were few, the legroom and cushiony seats were big hits with drivers, who could take this car out on the highway and really let it loose on long road trips, while still enjoying a smooth, quiet ride.