Ok, like i am driving on highway and feel the transmission downshift and wrench light
came on. Stopped, killed engine and restarted. Rough jerk when put in drive. Seems like
its stuck in 3rd or 5th gear and speedometer does not work.
I wonder if its a electric problem or transmission problem.

Well, I did not drive it Sunday and got in it to take it to shop to check out and it has ran fine. I did not go to shop as there seems to be no problem now. Perhaps it healed itself or was just mad at me Saturday. We will see if it happens again.

Well truck sarted acting up again so am taking it to shop to day and grabbing my wallet.

I took mine to shop and it was an electric valve in transmission. Cost about 600. Labor, oil, filter. I want to say valve was in neighborhood of 200. Good luck

Loriann01...I'm having same issue with my truck...goes from 1st to 5th..did you find out anything?

Hi I am just now having the same issue with my 2011 f150. It shifts from 1st to 5th and wrench comes on and speedometer reads zero. Or now it will just get stuck in first. And its intermittent. Anyone know what's going on?

Thanks. This thread describes the exact problem I'm having. The OP said it was an electric valve in the transmission. Did anybody have any other result?

Having same problem!! And mine is also 2011 was stopped at a stop sign, pulled out and it got stuck in neutral!! That's the first time it has got stuck in neutral, it's usually 5th gear and I can fix it by turning the truck off sometimes!! taking it in the morning to find out what's going on!!

@Tiffaney, after talking to a few local mechanics, I took mine into the dealer to have the software updated. After the update, there was a code for the transmission lead frame. Turned out there was a recall on that part, for mine, and it was covered under that recall (no cost). I can't say for sure it fixed my problem, but it hasn't happened since, so I'm hopeful.

When I took mine it was also the transmission lead frame, and yes mine was covered under the extended warrenty for that part alone. I haven't had any issues and it's now been a few months. I was receiving code error p720 and p722 I believe, I will have to double check but those were also signs of that issue

My 2012 f 150 is undriveable and Ford can't even supply the parts for their junk defective tranny that they wont stand behind. Making payments and can't even drive it now for 5 weeks. I hate it this is awful.

GuruW1XPB answered about a year ago

GuruW684V answered about a year ago

Leslie213756 answered about a year ago

I'm having the same issues with my 13' F-150, (transmission lead frame) hopefully they will cover it!

Ride365dontbuyford answered about a year ago

GuruT5DYN answered about a year ago

Ok trans has slipping plroblems from second to third gear ?

shane answered about a year ago

I have a 2012 ecoboost f150 that has had the sudden downshift once and ongoing shifts to 5thgear when at a stop or slow rolling. Time to go to the dealer but mine isn’t in warranty and my VIN number isn’t part of the recall. :(

GuruX2XX8 answered about a year ago

Well I have a 2011 F1 50 with 140,000 miles on it the transmission starting to make a big clunk sound any other day the wrench light came on I got stuck in one year I turned it off and restart it now it’s shifting funny I know it’s got a lot of miles but it’s been doing it since it’s at 20,000 miles on it now

SATXFX4 answered about a year ago

Hey GuruX2XX8- I have the same yr mk model and mileage and same exact issue. I'm looking to head to the dealership in hopes of them repairing it as it looks like the recall has been extended as long as your w/in 10 yrs from manufacturer warranty and not exceeding 150k miles Have you fixed the issue?

GuruBWSKB answered about a year ago

This just happened for my 2018 with only 90,000 Km on it. I will take it to the dealer on Monday to see what the issue is. Doesn't want to shift. I have to drive it with the manual shift and even then it gives me a hard time.RPM almost in the red. Thought the truck was going to die on me last night.

kbb307 answered about a year ago

Same issues here! Shifting hard wrench came on limped it to work. About a month ago i had the oil changed and filter in the tranny cost me $950 and back in the shop. Its a 2012 Eco f150 with 138, 000. Better bring your wallet or trade it in.

FORD - fix or repair daily FORD - find on road dead My F150 having the same problem. it seems to be common.

My 2011 F150 was due for the 19S07 recall 19V-075 or the intermittent failure of the output speed sensor (OSS). This recall has to do with the automatic transmission and "an unintended downshift into first gear can cause an abrupt wheel speed reduction, which could cause the rear tires to slide until the vehicle speed slows down." I have driven and owned the truck since brand new and it had 16 miles on it. I've never had a transmission repair or problem out of it since I've had it. However, not wanting to risk having an issue, I took it in to the local dealer for this recall, they then updated the Powertrain Control Module with software to prevent this. The next morning after I received it back, started it as normal, pulled the column shifter into Reverse, and the orange light for the shifter dial on the dash disappeared. Nothing happened at first and then it suddenly slammed into reverse. The shifter light never lit up until I put it back in to Park and the orange shifter light reappeared. I then pulled the shifter lever down in to Drive and again, the orange shifter light on the dash disappeared and the transmission did not go into gear for a moment and then suddenly slammed into Drive. Again, with no signal on the dash that it was even in a gear, Drive, Park, etc. Took it back to the local Ford dealer explaining the situation and a day later they called to tell me that the transmission has a faulty transmission lead frame connector, would not be covered under warranty, and would cost me close to $1,000 to have it repaired. Again, the truck had no issues before I took it in to Bill Utter Ford for the transmission recall and software update. 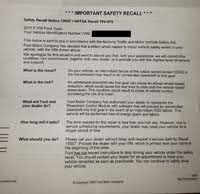 Here's the workorder comments by Bill Utter Ford for the 19S07 NHTSA 19V-075 recall for the sudden downshift of transmission software update that causes problems to a perfectly shifting truck prior to the update.

My 2012 F-150 has done the same thing. I was driving home on the highway and my gears switched from 6th all the way down to 1st at 75 mph..... my back tires locked up and I skid across the interstate. Luckily I did not wreck it. However this caused my engine to start knocking because the sudden slow down threw my truck forward with a big force.... I seriously have no clue how I didn't wreck. This happened to me in August of 2018 and its now almost the end of April. I am still paying payments on it and I had to pay to put a new motor in my truck because of this. Now today my mechanic that is working on the truck told me about the transmission recall (16S19). Everything that I am reading now said that this recall came out in April of 2016. I bought this from the dealership in September of 2016... Shouldn't the dealer have fixed this???? I am out $5,500.00 so far, I know I am going to have to owe more. very frustrated and pissed that I am out money, paying payments on a truck that I have not been able to drive since August.

I have a 2011 f 150, mine was getting stuck in 3rd gear, after doing the recalls, the problem was still there, they told me it was the valve body needed replaced, so I'm $1400 in now, hoping to get the truck back tomorrow