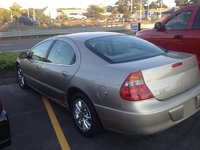 What Is The Average Temp The Car Should Be Running

My dash gauge reads just below the middle. I have a diagnostic (thing that fits under the dash - Smart Trek) from AAA and it keeps telling me the car is running at 221 degrees and should be closer to ...

How To Disassemble Fuel Pump Housing

How To Duel Pump Disassemble Housing How To

Hi I've got a 2003 chrysler 300m and a month a go I replaced the rear struts, front lower control arms, and front stablizer and their bushings.Then I took the car for an allignment and 2 days after ...

my car begins to overheat after 5 mins of driveing&the heater quit?is it the thermostat?

The Chrysler 300 name has certainly stood the test of time. The badge has its origin in Chrysler's limited production "letter series" of performance luxury cars built from 1955 to 1965. After the 1965 300L, the series was discontinued. Thus, the 300M name attempts to connect the car to its roots.
Chrysler was challenged to find the ideal combination of performance and luxury, and in 2002 the series was split into 2 distinct models. The 300M's counterpart was the performance-focused Special, which added a sport suspension, larger brakes, a more powerful engine, and slightly different interior and exterior details. Both cars were powered by a 3.5 liter V-6, mated to a four-speed automatic transmission with Chrysler's AutoStick manual shifter. Despite a marginal horsepower difference, both cars traveled from 0 to 60 in around 7.5 seconds.
The 300M series was the final use use of Chrysler's LH cab-forward design, which maximized interior space. The 300M's successor would be built atop the former Mercedes E-Class platform, creating an entirely new 300. Both 300M received much acclaim for comfort and performance, but Chrysler reputation for reliability was hampered by small but frequent nags like mechanical failures, electrical problems, and interior degradation.