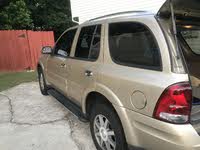 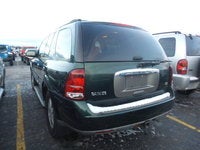 When turning on headlights, the low beams won't turn on... Fuses were checked & seemed in tact..

Why Am I Still Receiving A P300 Code

How To Reprogram Computer

Head Lights Shut Off On Their Own

driving at night headlights will shut off. Ican manually hold the dimmer on brights an they work . Seems like they have a mind of their own ! Any ideas would be greatly appreciated

Only Right Side Low Beam Will Not Turn On

I have a 04 Buick Rainier. Has 273k, the right side low beam will not turn on. I’ve replaced the bulb and done the relay check and nothing has changed. Wondering what else it could be?

GM made a little bit of history with its introduction of the mid-size SUV Buick Rainier. Built on the same truck platform as the Envoy and Trailblazer, the Rainier is Buick's first official truck since the 1920s. And though it comes standard with a 4.2 V6, it also offers a 5.3 V8, raising its towing capacity to a very satisfying 6700 tons.

The Rainier is only a 5-passenger SUV, however. Unlike the Envoy and Trailblazer, it does not come in an extended 3-row length. This makes it unique, in that it offers the V8 power in a regular wheelbase model, whereas its competitors only offer it in the extended forms. A 60/40 split-fold rear seat does allow for more storage space and versatility.

Though it's named after a pretty tall and rugged mountain, and it comes with both all-wheel and rear-wheel drive configurations, the Rainier is not so much an off-roading adventure SUV. It tries to offer all the utility and power, but in a nicer, more comfortable package than its competitors. You'll find leather seats, OnStar, dual climate control, and wood and chrome trimmings to all be standard. A navigation system and DVD player are options. The Buick Rainier is also the first Buick to use the new Quiet Tuning system, which uses thicker padding, seals, and insulation to block out road noise.
The Rainier never really found its niche in the SUV market, despite being the first truck-based Buick in almost a century. It lasted for only four years, and will be replaced in 2008 by a new crossover vehicle, the Buick Enclave.