The Sienna proves that spacious and versatile minivans will outlast the current reign of image-forward crossovers. 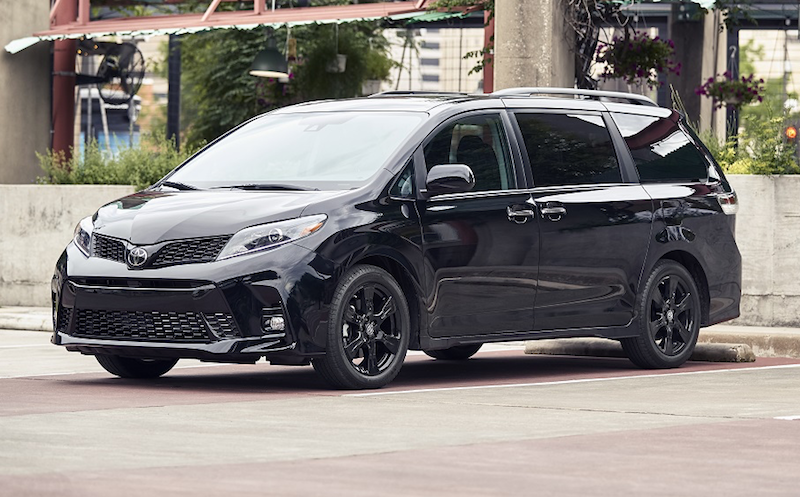 Since the second half of the 20th century, each decade has had a hot-topic family car, and, as we’ve noted in a number of reviews this year, the crossover is our current darling vehicle. Before the crossover, there were big, truck-based SUVs. Before that, there were station wagons.

And for the past 35 years, there's always been the minivan.

The Dodge Caravan has been widely considered the Patient Zero of the minivan segment. From there, seemingly everyone joined the party, including Toyota, Nissan, Ford, Chevy, GMC, Volkswagen, Oldsmobile, Ford, and more. Heck, even Mercury had a “Nautica Edition” version of the Villager.

The minivan was king once, the crossover is king now, and some other type of vehicle will likely dominate in the near future. But in all this, the 7- and 8-passenger minivans will always represent the ultimate in versatility. The crossover is an image-forward fad with a dash of usability, but the minivan continues to prove itself as the pinnacle of practicality.

The 2020 Toyota Sienna is neither the newest nor flashiest minivan out there, but when you absolutely need space for people and gear, there’s nothing better. Additionally, the Sienna is the only minivan to offer all-wheel drive (AWD), which is something specifically desired by many car buyers. 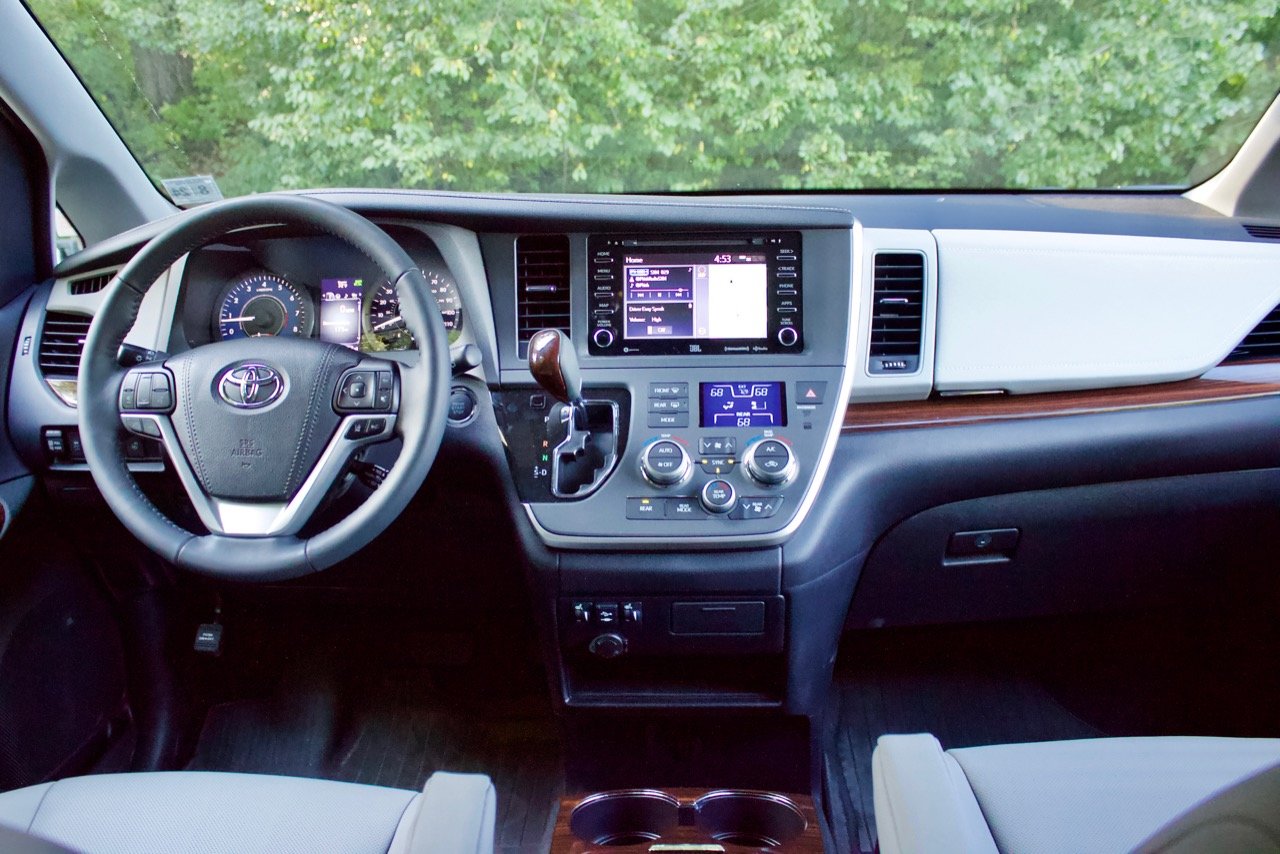 This is the third generation of the Sienna. It’s been around for a bit, having been introduced for the 2011 model year. Toyota updated the Sienna in 2018 to incorporate newer infotainment tech and other small changes, but the 2020 version still feels dated. Occasionally upscale, but always dated. If you slam either of the front doors, they let out a resoundingly hollow “thud.” While this isn’t a pure indicator of fit and finish, nearly all automakers pay attention to things like this and try to eliminate them. Another area where the Sienna shows its age is the instrument panel. It looks like it came out of Toyota's 2010 parts bin, although this simplicity also makes the controls quite easy to use.

The LE trim adds dual power sliding doors, black roof rails, a rear bumper protector, and easy-clean upholstery throughout, making it the ideal choice for families with young children. The LE also gets manual second- and third-row sunshades and an overhead driver console with toggles to control the power sliding second-row doors.

CarGurus recommends the mid-range SE trim. It comes with 19-inch alloy wheels, a mesh grille, fog lights, and a couple of other unique visual touches. Inside, the SE gets sport instrumentation, heated front seats, and leather upholstery. But most importantly, the SE comes with a power rear liftgate. Frankly, all the other features we mentioned about the SE are rather superfluous compared with how critical a liftgate can be for a family. Had the LE come equipped with the power liftgate, that would have been the CarGurus recommended trim.

The SE Premium features chrome-accented door handles with a touch-sensor auto-locking feature, a power moonroof, 19-inch gunmetal alloy wheels, a DVD entertainment system for the second and third rows, and the EasySpeak intercom system for the driver.

The XLE adds upgraded side rocker panels, 17-inch alloy wheels, leather-trimmed seating, heated front seats, and an upgraded instrument panel with a color center display between the speedometer and the tachometer. The XLE also adds woodgrain accents and one-touch power up/down for all windows.

We drove the Limited trim, which adds leather front seats, leatherette second- and third-row seats, and a heated and leather-trimmed steering wheel. It also provides a center console with a sliding top tray and cargo area storage compartment, as well as a JBL premium audio system and navigation system. Like the SE Premium, the Limited Premium adds the DVD entertainment system. It also adds HID headlights and rain-sensing windshield wipers.

If you want a minivan but still feel that “looking cool” is a priority, Toyota offers the Sienna in the Nightshade Edition. It adds a host of dark accents, and it has dark 19-inch wheels (18-inchers with AWD). The Nightshade Edition is available on the SE and SE Premium trims. 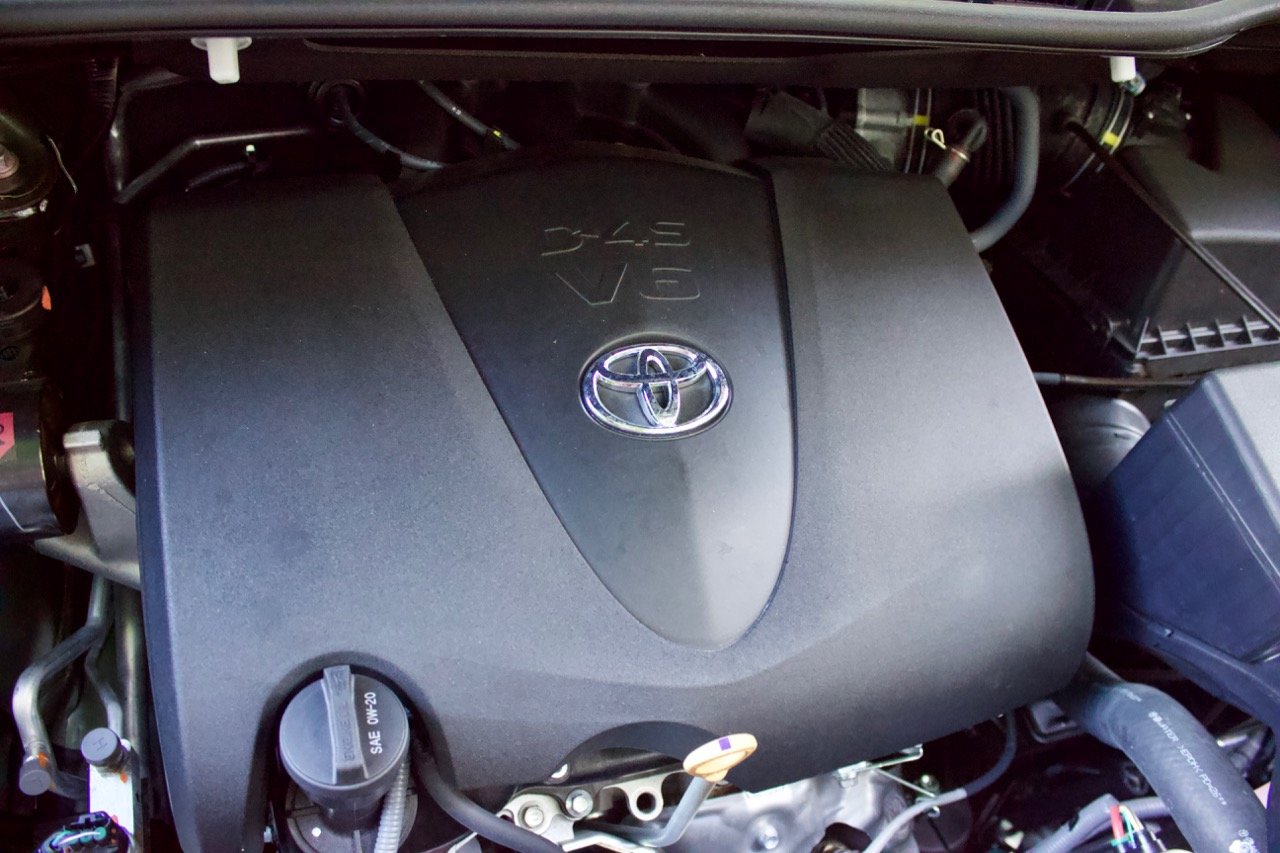 All Sienna trims come equipped with a 3.5-liter V6 engine. It makes 296 horsepower and 263 pound-feet of torque, sent through an 8-speed automatic transmission. The dash-mounted shifter has a Sport mode that livens up the throttle and shift response. In normal Drive mode, the Sienna provides stout acceleration, and clicking over to Sport will help when overtaking another vehicle on the highway. It also has a manual mode, which I seldom used, that may help when working with the Sienna’s 3,500-pound towing capacity.

The Sienna routes power to the front wheels, but for all trims other than the base L, shoppers also have the option of AWD. These AWD versions are available with only the 7-passenger configuration, so shoppers that choose it will have to give up the option of 8-passenger seating. But we think many buyers will happily take that tradeoff, and if you’re Toyota, being the only automaker in the class to offer AWD makes for a great selling point.

Buyers love AWD, as evidenced by the growth of the crossover market, but AWD does not offer bulletproof protection from inclement road conditions. All-wheel drive helps tremendously when accelerating on the ice and snow. It also helps in low-speed turns. But it won't help the car come to a stop. Under hard braking, different traction control systems might help, but ice and snow are the great equalizers.

The Sienna has a low center of gravity and a broad base, and considering the physics alone, that makes for surprisingly decent handling dynamics. It’s not going to handle like a sports car, but it corners rather well. Its size and suspension mean it plows through bumps in the road, and it provides a smooth ride without detracting from cornering abilities. It’s funny to talk about “cornering” with a minivan, but that attribute gives the average driver confidence in getting around town, driving on the highway, or tackling a road trip. Frankly, the Sienna handles better than the Mitsubishi Outlander, which is an SUV we’ve come short of recommending.

There is one concerning aspect of the Sienna’s handling. Its twitchy steering response results in the Sienna feeling frenetic at higher speeds. It requires constant attention to keep the van moving straight on the highway. For busy parents, that means turning around to deal with the kids fighting or reaching for a dropped toy could lead to the car drifting out of its traffic lane. Thankfully, as we’ll get into a bit later, the Sienna comes standard with safety tech that will help keep you safe in those unforeseen scenarios. 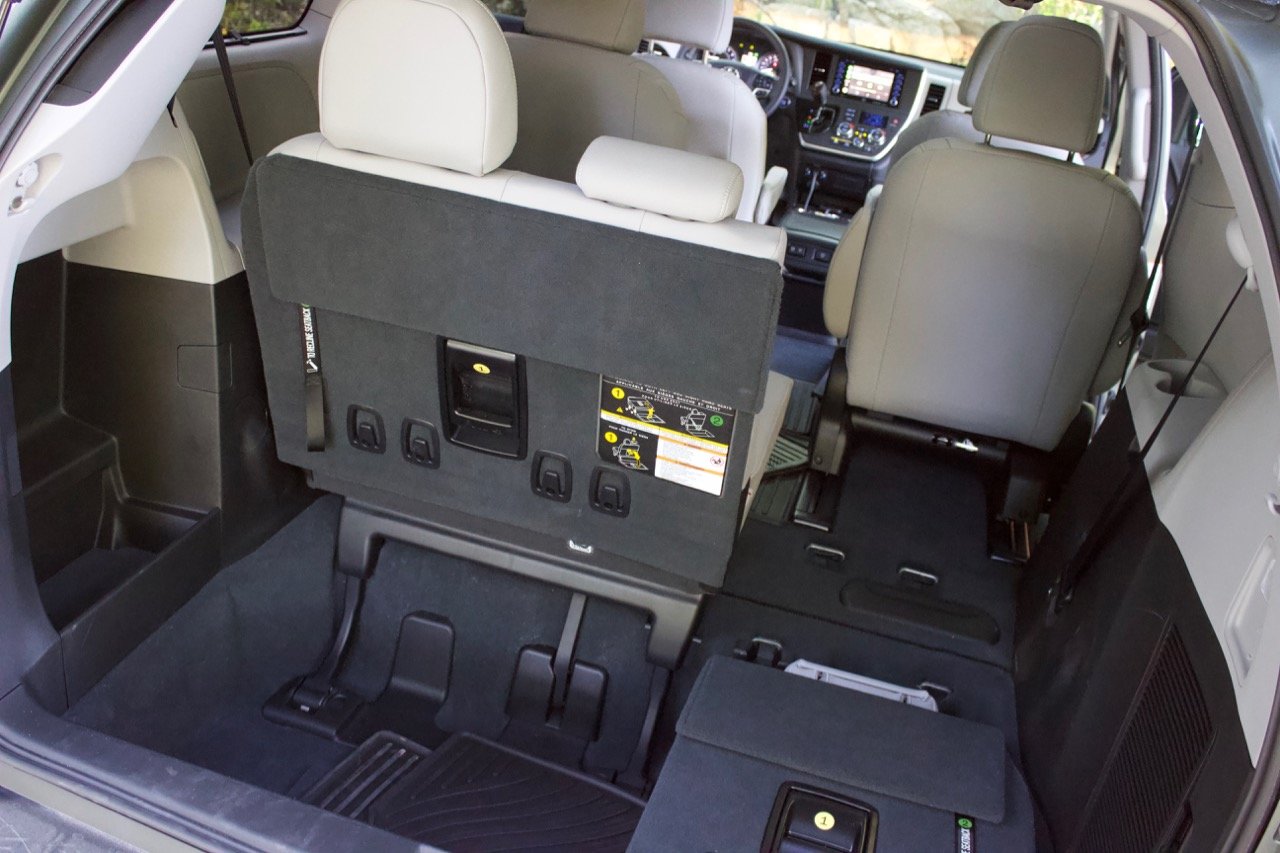 This is perhaps the most critical area in which a minivan needs to perform well, and Toyota doesn’t disappoint. The Sienna provides 150 cubic feet of cargo space. For reference, the Chrysler Pacifica offers 140.5 cubic feet, and the Honda Odyssey has 144.9 cubic feet. Elsewhere in the market, the Dodge Caravan supplies 143.8 cubic feet, and the Kia Sedona provides 142.

Luckily, the Sienna’s third row also folds seamlessly into the floor. Getting into the backseat, however, can be challenging. The second-row seats slide forward, but the seat cushion that folds up when sliding the second-row seat forward is a bit awkward to get back down. You’re better off just shimmying your way past the two captain’s chairs to get in the back.

Toyota is also one of the few automakers to offer mobility access features from the dealership. Toyota's Auto Access Seat is a built-in rotating lift seat. Finding the right mobility conversion van at the right price can be hard. Toyota makes this capability affordable and as easy as selecting an upgraded trim of the Sienna. 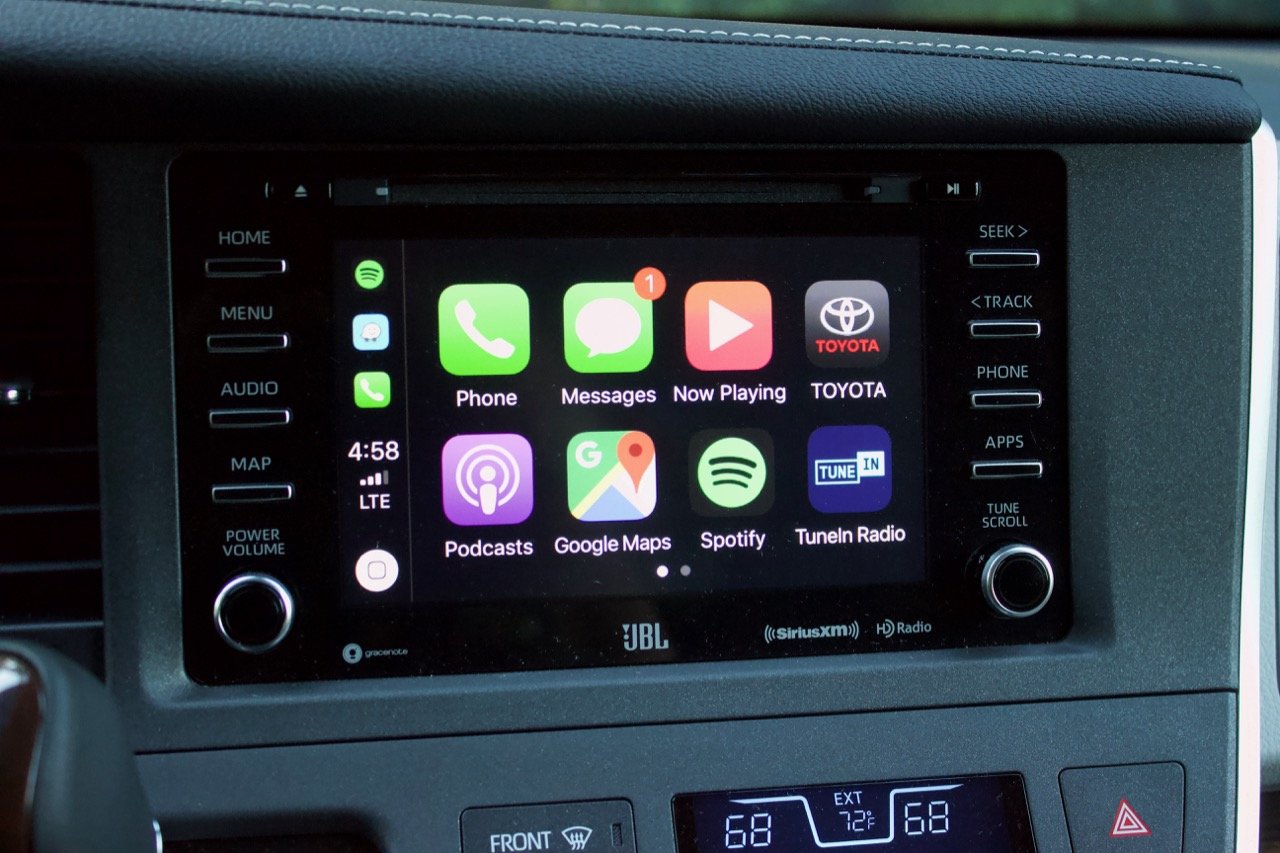 The base L trim of the Sienna comes standard with a 7-inch touchscreen infotainment system. In addition to Toyota’s proprietary infotainment software, it supports Amazon Alexa and Apple CarPlay. That last one has been a long time coming for Toyota. It’s been available in nearly every competitor for several years now, and though it’s overdue, we’re glad to see Toyota has finally come around.

Other standard tech features include Bluetooth connectivity, five USB ports (one for connectivity, the rest for charging), and even a WiFi hotspot. The hotspot comes with a 6-month trial and will require a subscription after that. Unlike some automakers, which offer larger screens on upgraded trims, the Sienna has only the 7-inch touchscreen, no matter the trim. The features, on the other hand, change depending on which trim you purchase. Our Limited test model, for instance, came with navigation and a JBL 10-speaker premium audio system.

Our Limited test van also came with Driver Easy Speak, which is a kind of intercom system, though it’s actually more of a one-way system. It uses the driver’s voice-control microphone and broadcasts their voice to the rear speakers. This way you can yell at the kids in the back without straining your voice. Here’s to innovations in parenting! 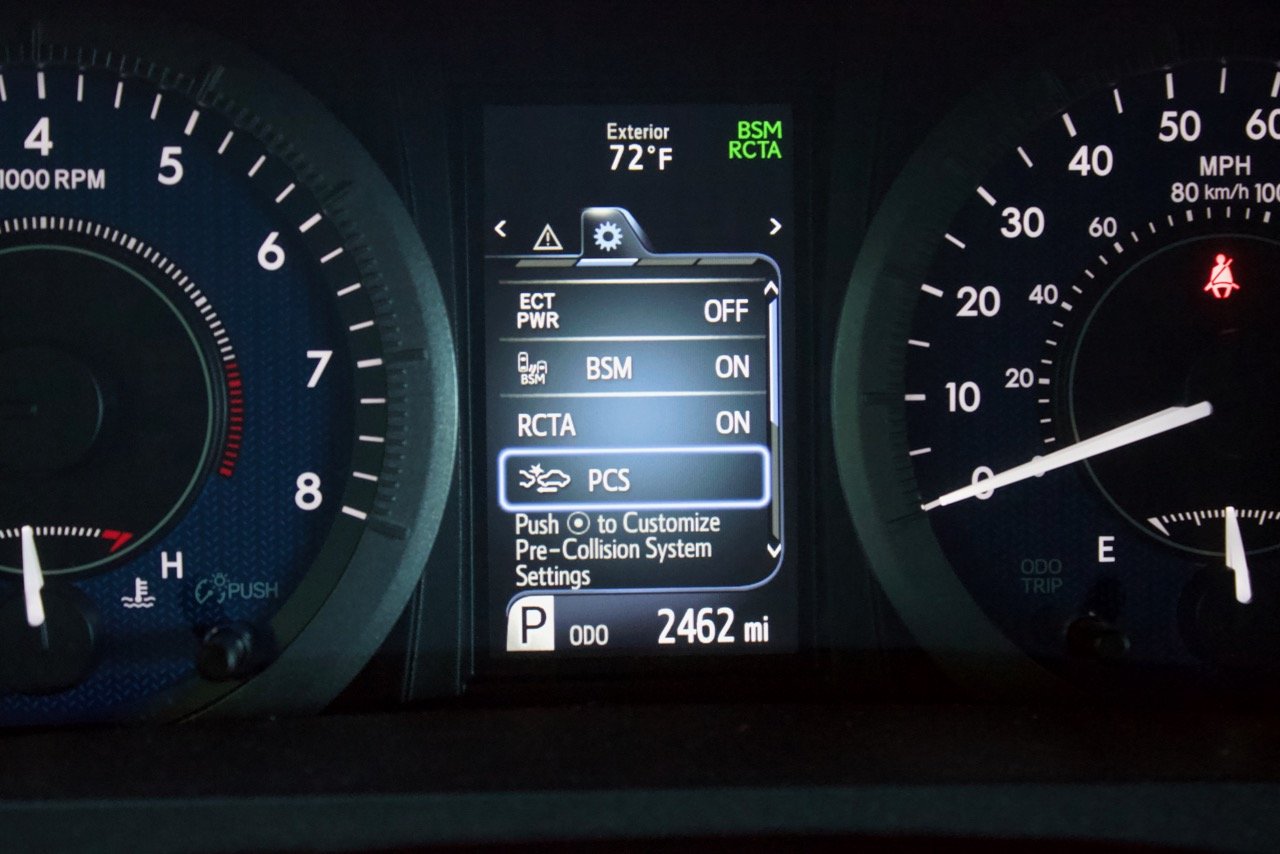 As we mentioned earlier, the Sienna has twitchy steering, which could lead to meandering out of your lane if you’re not paying close attention. Luckily, the Sienna comes standard with lane-departure warning and lane-keep assist, which are both parts of the Toyota Safety Sense (TSS-P) suite of driver-assistance features. TSS-P also includes forward-collision warning and avoidance with pedestrian detection, dynamic cruise control, and automatic high beams. You can get blind-spot monitoring as an option on lower trims, but if you opt for an XLE or Limited trim, it comes standard.

The Sienna earns five out of five stars in crash testing by the National Highway Traffic Safety Administration (NHTSA). For the Insurance Institute of Highway Safety (IIHS), the Sienna earns the best score of Good in many areas, including side crash, rollover crash, and moderate front overlap crash. Its suite of standard driver-assistance features also earns a top rating of Superior from the IIHS. 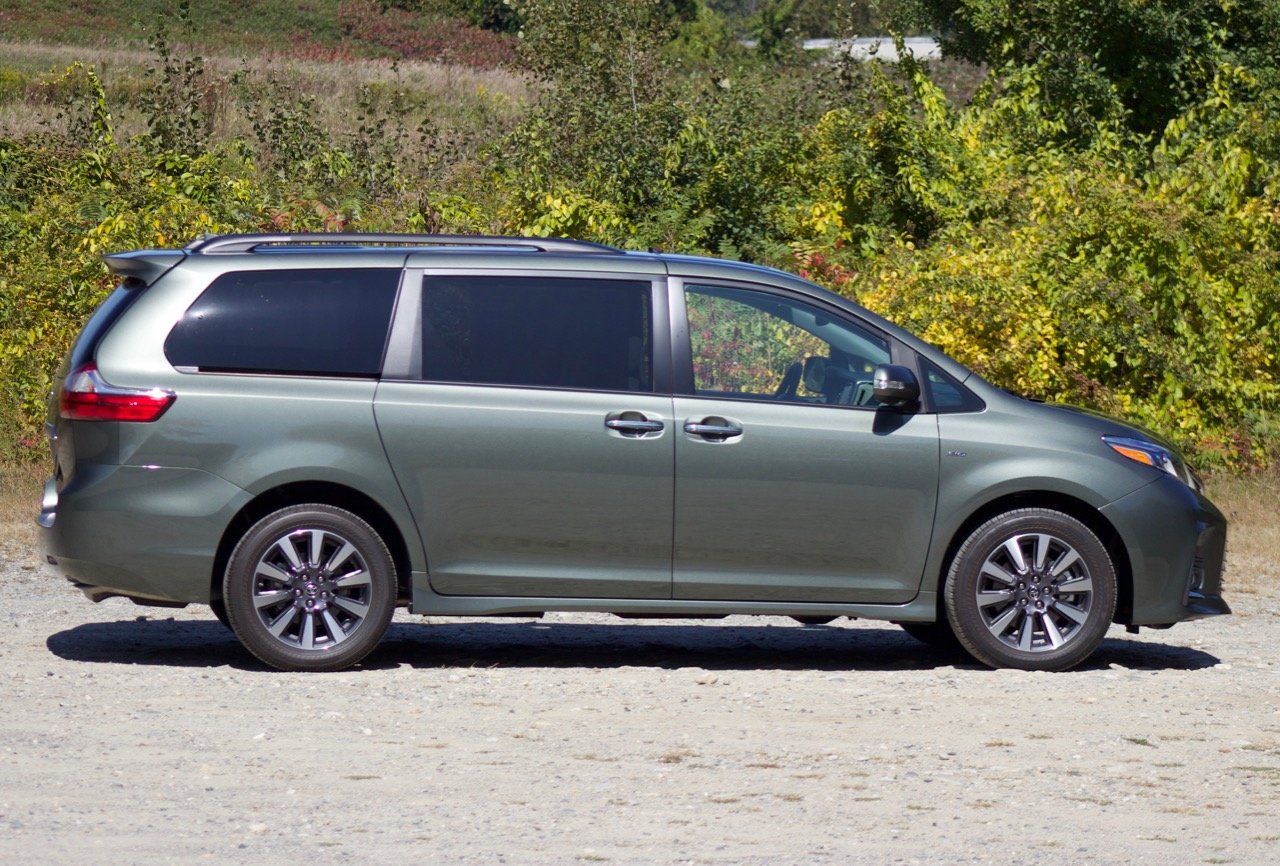 Base MSRP for the 2020 Toyota Sienna is $31,415. The CarGurus-recommended SE trim starts at $37,565. Our Limited AWD test model starts at $45,670. Our test model had some very minor add-ons, such as military-grade all-weather floor mats. That, plus the $1,095 destination fee, put it at an as-tested price of $47,239. All of the Sienna's competition, including the Honda Odyssey, Kia Sedona, and Chrysler Pacifica, have lower starting prices. All those rivals also have newer designs, having been updated, overhauled, or introduced far more recently than the Sienna’s last full redesign in 2011.

So, the 2020 Toyota Sienna isn’t new or groundbreaking, but you can’t argue with its cargo space. Even if you have to remove the middle seats to access all of it, the Sienna is still a heck of a lot more versatile than a crossover. And while crossovers might be popular now, there may come a day when they won’t be, and the minivan will still be the king of versatility. If you’re trying to project an image, you have plenty of options, but if you need a car for a growing family and helpful space is a priority, few vehicles can replace the versatility of a minivan like the Toyota Sienna.

Vidal Definitely the. Most. Hot. Mini. Van. This. Day’s

Have you driven a 2020 Toyota Sienna?
Rank This Car

I Am Looking For A 2020 Toyota Sienna SE AWD; Are There Any Available?

Do You Buy Seats From Brand New Vehicles?

Trade For New Or Used?

The Price Is Same If I Made The Full Payment In Advance ?

If I purchased a vehicle from one of the dealers or showrooms in USA and want to import it to my country, what will be the price difference ? as far as I pay full amount in cash (not installment on ...