Toyota brings back the TRD Pro trim as the Tundra continues to labor forward without significant updates or upgrades. 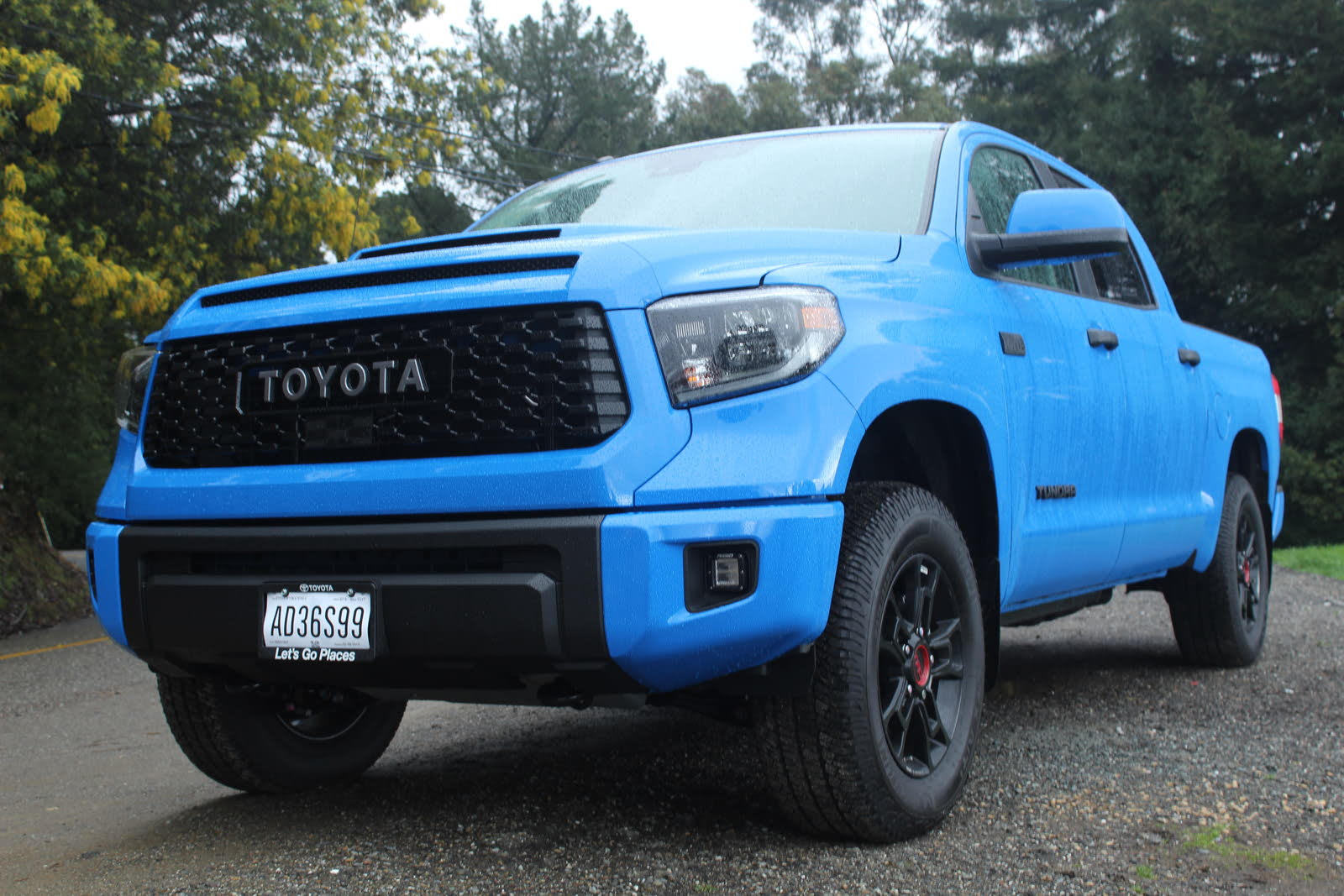 When it comes to pickups, simplicity used to be king. Leaf-spring suspensions, pushrod V8s, and no-nonsense interiors were staples of the game. But today, pickups include all sorts of sophisticated features, from car suspensions and twin-turbocharged engines to all the luxury and technology you’d expect from a luxury import. But the Toyota Tundra has refused to follow the herd, offering the tried-and-true formula that’s been a proven winner for decades. For some, that simplicity is a turnoff. But for others, it's exactly what’s missing from today’s truck offerings. For 2019, the TRD Pro trim returns, giving the Tundra a revised suspension, gorgeous new BBS wheels, and a price tag inflated by nearly $4,000. 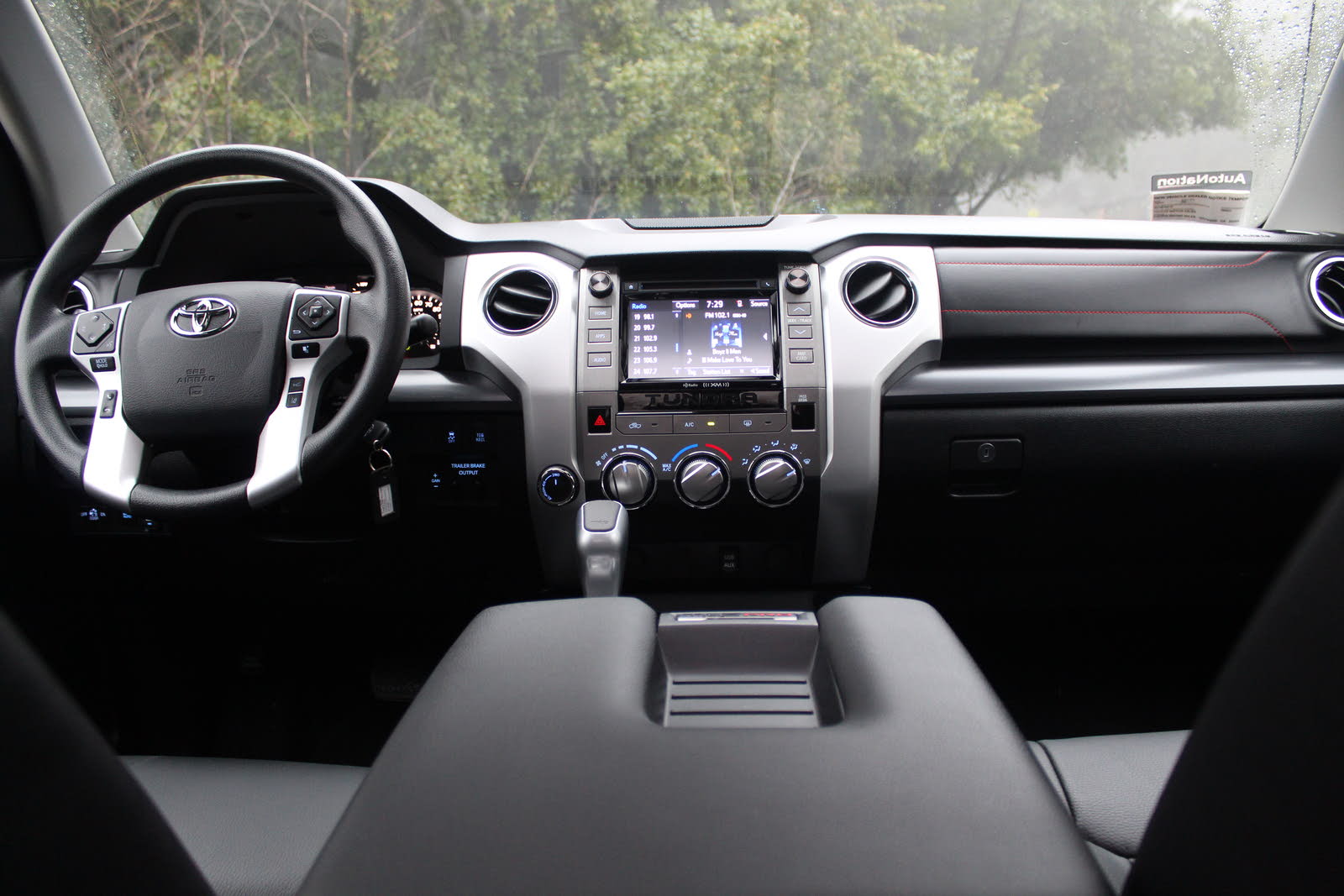 I first reviewed the Tundra back in 2016, calling it aged and behind the times compared against the offerings from Ford, Chevy, and Dodge. Three years later, not much has changed. While Toyota has made subtle updates over the years to try to keep the Tundra relevant, technology still feels like an afterthought, the interior hasn’t gotten any fresher, and the two V8 engines with 6-speed automatic transmissions are still archaic (and thirsty as ever). But to conclude that you should avoid the Tundra based on all that is to ignore a large number of pickup-truck shoppers who want those very things. Pickups are about rugged dependability, and no brand encompasses that better than Toyota.

Toyota offers the Tundra in six trims, all powered by one of two V8 engines paired to a 6-speed automatic transmission. Starting with the base SR, you’ll get some impressive and unexpected features like heated mirrors, a windshield wiper de-icer, a damped tailgate, an integrated trailer-brake controller, and an impressive safety suite including forward-collision warning with automatic emergency braking, adaptive cruise control, lane-departure warning, and auto high beams. A 6.1-inch touchscreen offers Bluetooth, and the 6-speaker stereo comes with a CD player. That’s an impressive list for just $31,670, especially considering you get a 4.6-liter V8 with 310 horsepower and 327 pound-feet of torque.

Moving up to the SR5 for $33,470 buys you an upgraded infotainment interface with a 7-inch touchscreen that adds navigation and traffic info, HD and satellite radio, foglights, and variable-intermittent windshield wipers—a strange omission in the SR. The price jumps up to $40,935 for the Limited trim, but that’s explained by the long list of added features. Here you’ll enjoy conveniences like leather front bucket seats with power, a tilt-and-telescoping steering wheel, and an auto-dimming rear-view mirror. The Limited also comes with dual-zone auto climate control, navigation, and auto headlights. With the extended cab, you’ll also get some extra speakers and a power-sliding rear window, plus if you pay to upgrade to the 5.7-liter V8, you’ll get a whopping 38-gallon fuel tank.

The Platinum and 1794 Edition trims are both priced at $47,630 and get unique styling, as well as luxury features like a sunroof, heated and cooled front seats with driver memory, power side-view mirrors with auto dimming, an upgraded 12-speaker JBL stereo, and LED daytime running lights.

But my week with the Tundra was spent in the recently revived TRD Pro, which starts at $49,895. The main points of concern here are a 2-inch raised suspension, off-road tires with forged BBS wheels, and 2.5-inch internal bypass shocks from Fox. But look closer and you’ll find TRD touches everywhere: a TRD Pro exhaust and unique black exhaust tip for a distinct sound, a hood scoop, a skid plate, and TRD Pro badging and logos nearly everywhere you look. You’ll also get LED head- and fog lights for enhanced illumination. With a $1,395 destination fee, the total price came to $51,140. 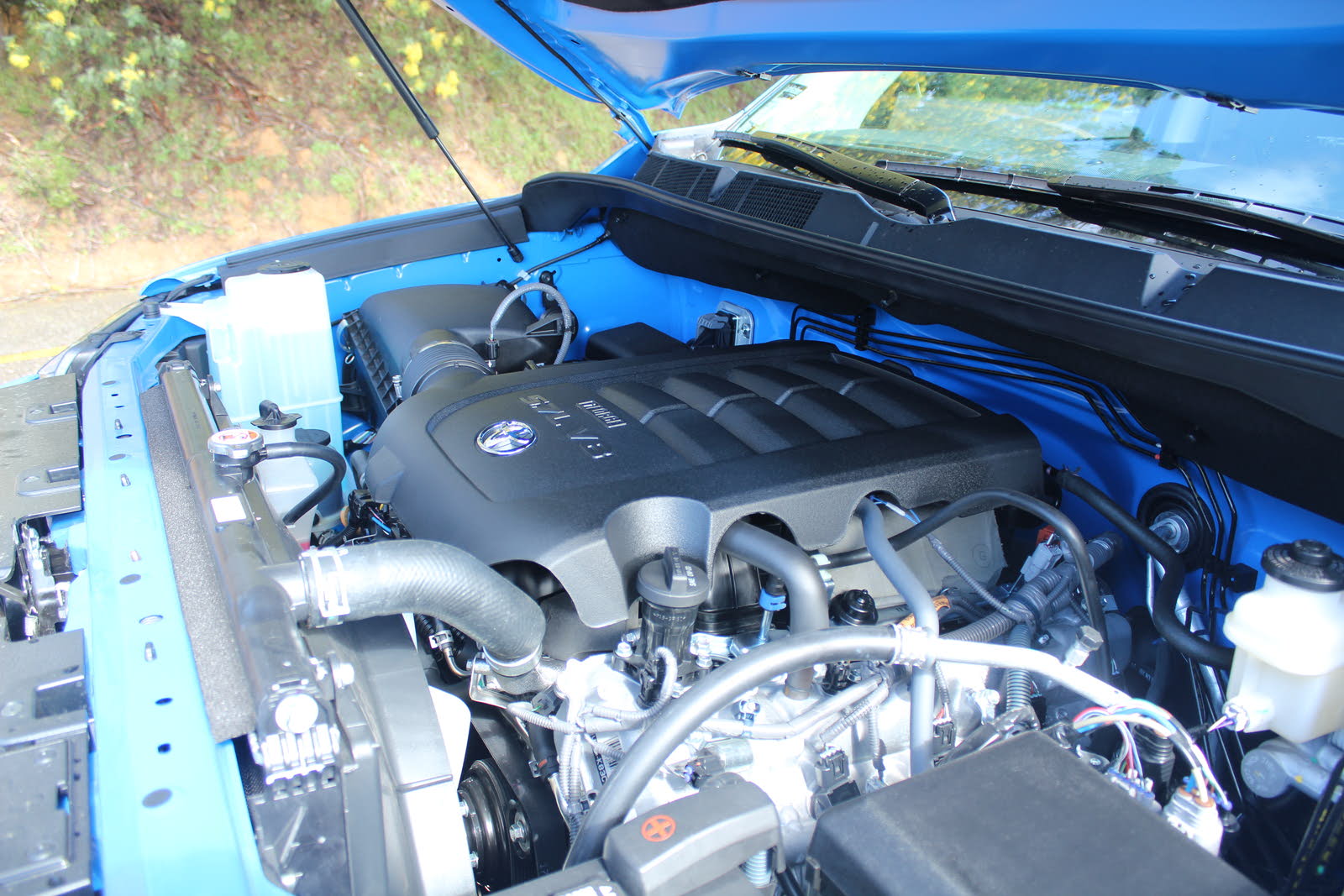 No turbocharged 4- or 6-cylinder options for the Tundra. Your choices consist of a V8 and a bigger V8. And while the advanced engine options of the competition are definitely impressive, for some shoppers there still remains no replacement for displacement. Things start with a 4.6-liter V8 with 310 hp and 327 lb-ft of torque that offers a combination of 1,600-pound payload and 6,800-pound towing capacities. It’s a stout, predictable powerplant, but due to the Tundra’s sheer size, it’s a good idea to jump up to the larger engine for a few reasons.

Second, while I can talk to the preferences and advantages of V8 power with regard to a broad, predictable power band and impressive durability and reliability, it should be noted that even with the bigger V8, you’re going to be down on power and utility against the competition's more advanced engine options. You’ll be glad to have the 5.7's extra oomph, and you’ll be able to hit 60 mph in about 7 seconds.

The TRD Pro is the real standout Tundra. Overall, the Tundra is likely the most off-road capable full-size on the market, and with the TRD Pro, the only truck that’ll touch it is a Ford F-150 Raptor. Granted, the Raptor comes with a lot more technology than the TRD Pro, but you’re going to pay for it as well. If you’re looking for some off-road fun, this is a great way to get maximum enjoyment for a minimum price. 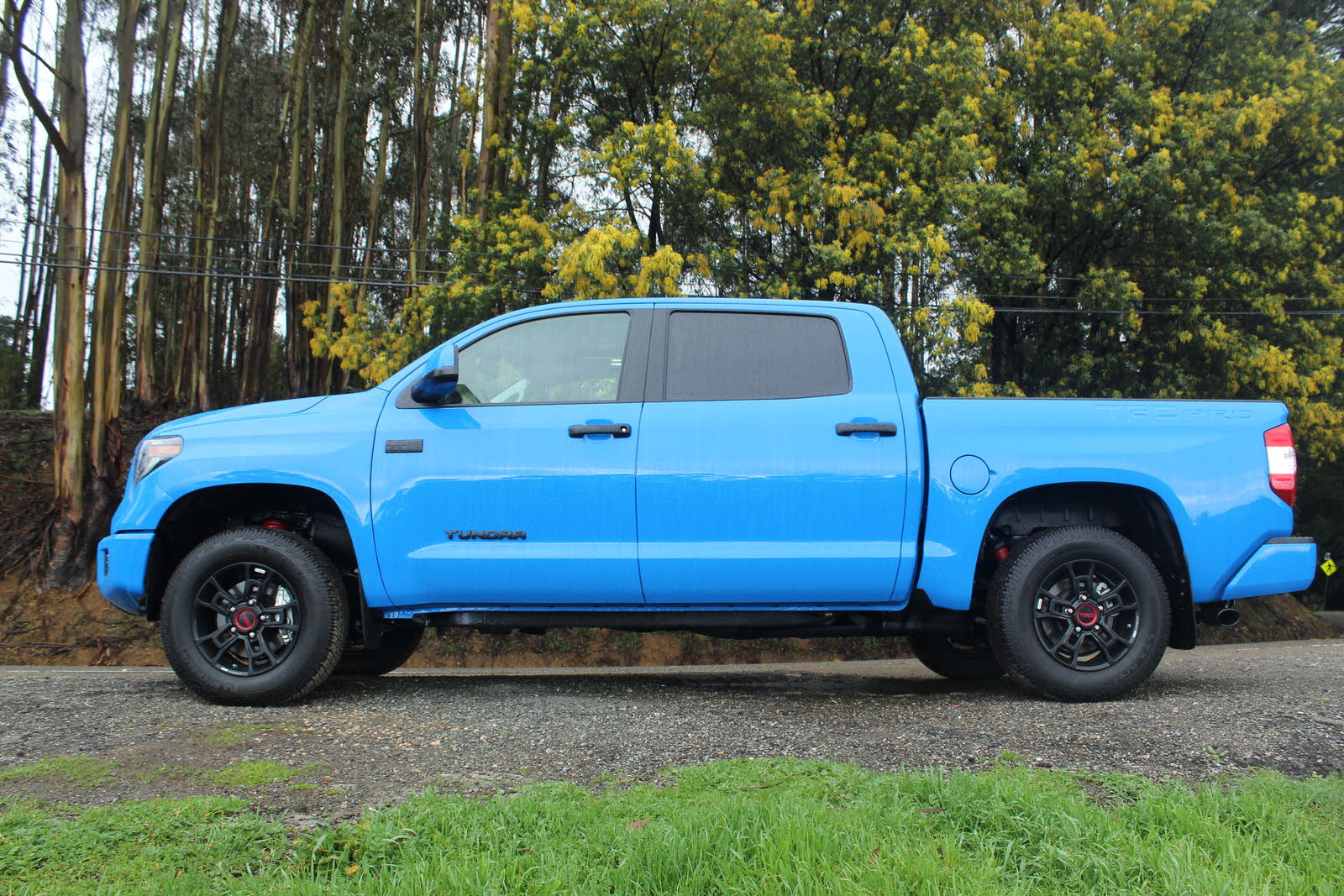 The benefit of the Tundra is found in its simplicity, and that shows through here as well. If you go with the 5.7-liter engine, you’ll have the maximum towing capacity offered. No need to choose a specific rear axle, bed, or towing package in order to make sure you’re not being penalized (or hoping that specific combo is actually available at your dealership).

The problem is the Tundra’s size. Without the optional step or running boards, all but the tallest folks will have trouble getting in and out, and driving down anything other than country roads will make you feel uncomfortably claustrophobic. Yes, the Tundra is big. But its overall design exacerbates the issue, making it feel even bigger than it actually is. Driving on crowded city streets can be a terrifying ordeal—and sometimes legitimately impossible. And get ready to scrape your antennae every time you enter a parking garage or drive-thru. It’s no surprise that trucks have gotten bigger in the last 20 years, but it’s gotten to the point where it’s actually hampering driveability, and that’s just as much an issue on tight off-road trails as it is on city streets. The Tundra isn’t the sole offender here, but it just might be the worst. 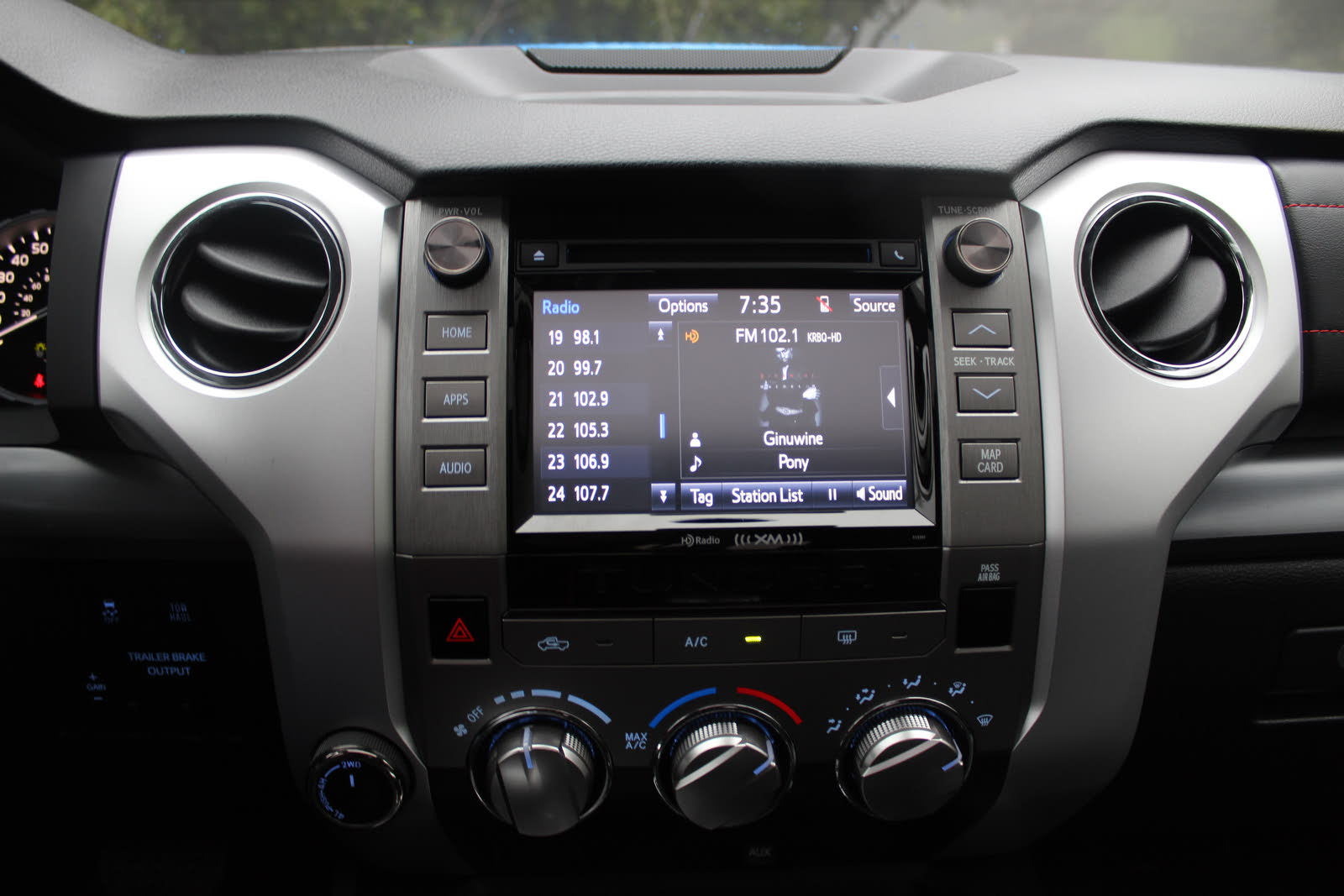 Technology is not the Tundra’s strong suit. A prime example of that is the fact that Android Auto and Apple CarPlay are still not available, not even as options. And with the $50,000 TRD Pro that I tested, there was still only one USB port in the entire cabin, and it didn’t even light up, making it very difficult to locate at night. The standard safety systems are welcome, though the advanced safety features leave a little to be desired. And the Entune system, while easy to use and adequately responsive, is aging just as quickly as the rest of the Tundra. In short, if technology is your focus, you’d be better off looking elsewhere. 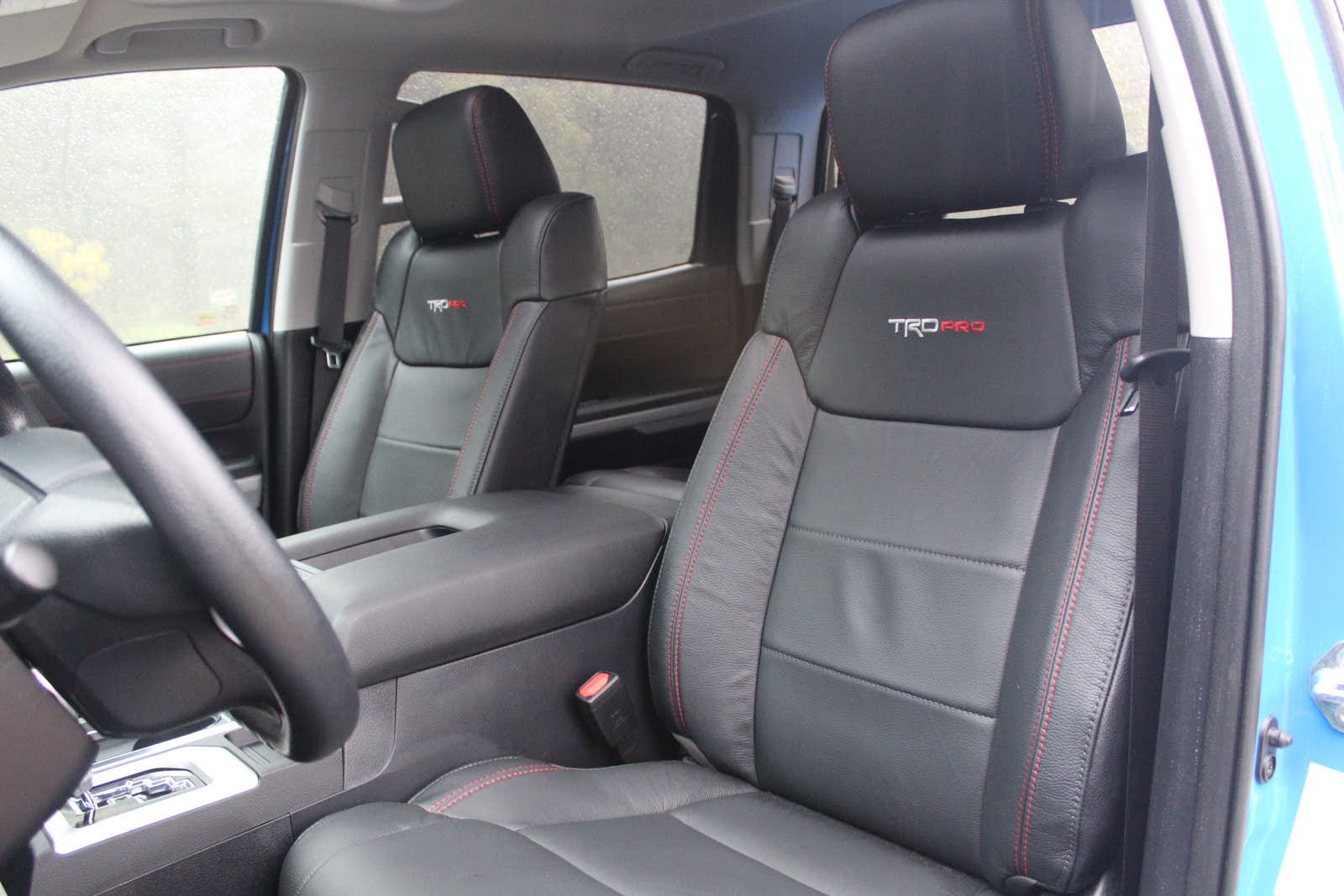 Toyota deserves big praise for adding standard adaptive cruise control with automatic emergency braking, lane-departure warning, auto high-beams, and a drowsiness monitor to the Tundra. With a vehicle this big, blind-spot monitoring with cross-traffic alert really should be standard as well, but at least it isn't buried high up in the trim levels. The only trims where that feature is unavailable are the base SR and the TRD Pro.

The only issue is that these systems are getting old as well, and the newer systems the competition offers are more elegant affairs. Here, you’ll get some of the first-generation issues with adaptive cruise and lane-departure warning, like false notifications and interjections where they’re not really needed. But again, at least these safety features come standard. You have to pay for these almost everywhere else.

As for safety ratings, the Tundra shows its age here as well. With the government’s National Highway Traffic Safety Administration (NHTSA), 4 stars are the name of the game for frontal crash tests, though side crash tests got 5s through and through. Rollover is more disappointing though, with a 3-star rating. Independent testing from the Insurance Institute for Highway Safety (IIHS) tells a similar story, with Marginal ratings for the headlights and the driver-side small overlap front tests, and even a Poor rating in the passenger-side small overlap front test. Roof strength was just Acceptable, though all other tests garnered the top score of Good. Braking is average, taking 134 feet to stop from 60 mph, but watch for brake fade on long downhill sections of road. 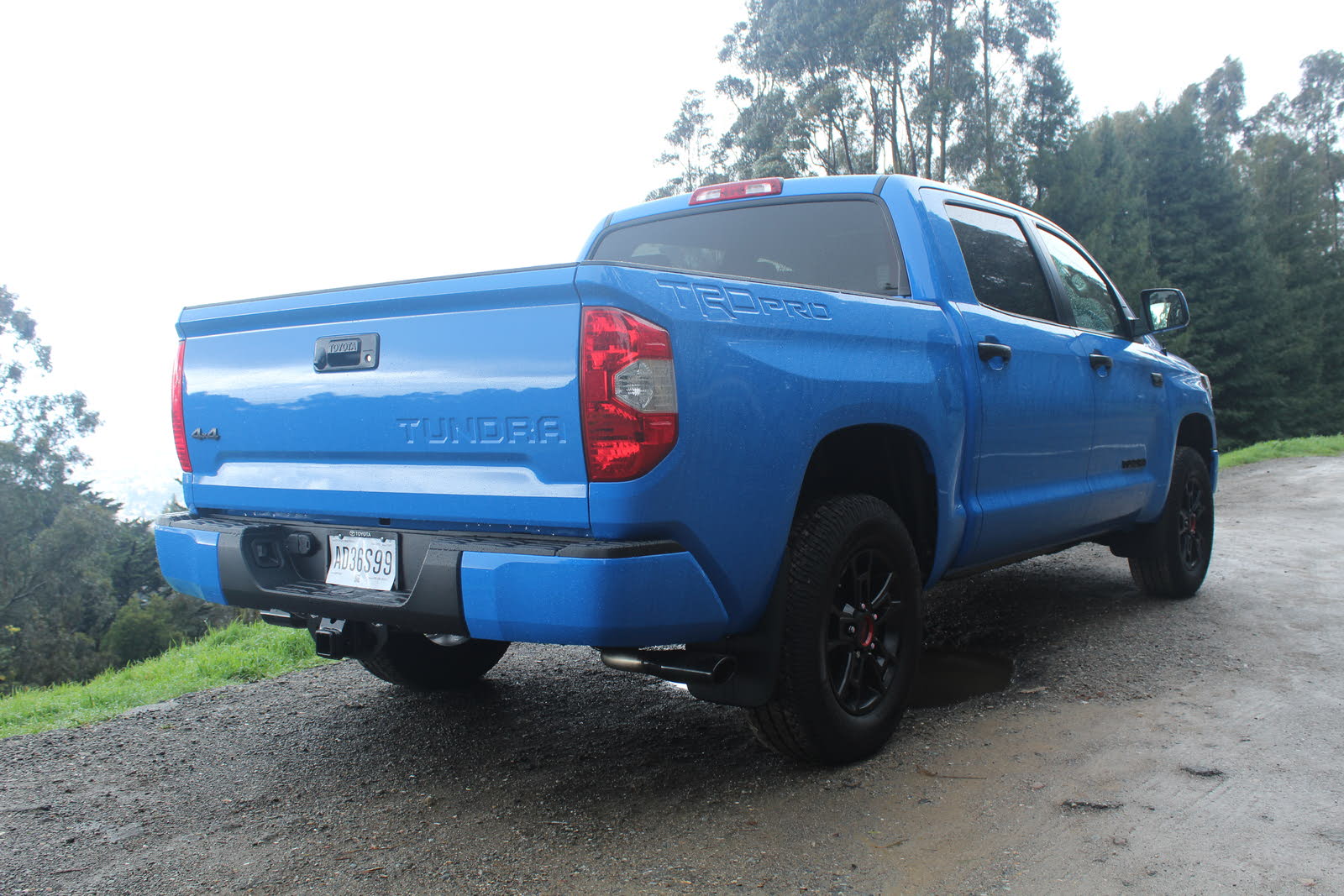 Given the advancements that have occurred in the last 10 years, it’s hard to recommend the Tundra from a cost-effectiveness perspective. The competition offers more power, better fuel economy, better rides, and more technology—for not much more money. The one exception is the TRD Pro I tested, which offers 95% of the fun and utility of the much more expensive (and much more difficult to obtain) Ford F-150 Raptor. If you’re looking for off-road fun, the Tundra is a great choice. Otherwise, the Tundra has a lot of competitors you should check out.

Users ranked 2019 Toyota Tundra against other cars which they drove/owned. Each ranking was based on 9 categories. Here is the summary of top rankings.

Have you driven a 2019 Toyota Tundra?
Rank This Car

Why Is Every Toyota Tundra Advertised As A TRD Pro Actually An SR5.

Why is every Toyota Tundra advertised as a TRD Pro actually an SR5. They are all getting Great Deal, when actually it is false advertising? Does any screening occur. "I" know it is wrong and would n...

284 views with 2 answers (last answer about a year ago)

If you hit your allotted mileage before your 3 years are up, instead of paying the extra mileage, can you turn the vehicle back in.

What Is A Crew Max Cabin